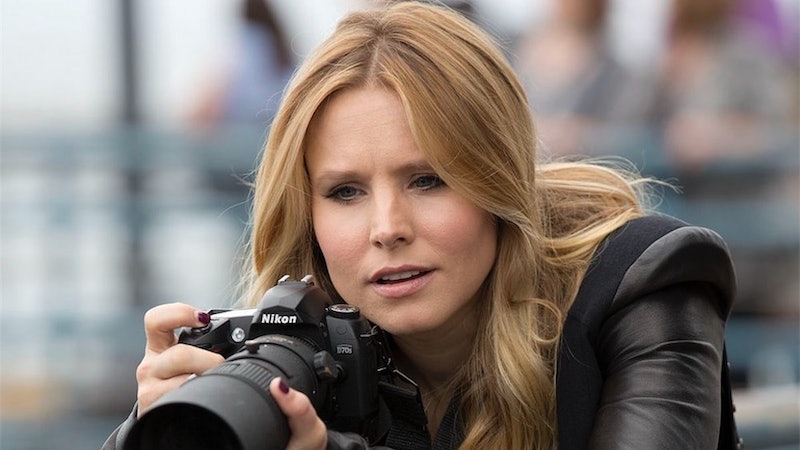 Veronica Mars fans, it's time for a return to Neptune. Yes, 12 years after the UPN/CW series wrapped up its three season-run and four years after the big screen adventures of the titular private investigator, comes news of a revival. TheVeronica Mars revival teaser is here and it's giving not only a release date, but a sense of what our heroine will be up to once the limited series drops.

The teaser was released via Twitter on Friday and revealed that the series will be returning to Hulu on July 26. The reboot's teaser is simply captioned via Twitter, "Hope we can still be friends. #VeronicaMrs returns July 26th, only on @hulu." There's a video of Mars at her desk as voiceover explains what a typical spring break in Neptune, the San Diego-inspired beach town in Southern California where the show took place, entails. From "drunks" and "derelicts" to "flashers" and "frat boys," fans get a taste of what Mars is sure to face "just on the walk to (her) car." Mars triumphantly says, "Fortunately, I'm good to go," while holding a taser, signaling her return.

EW reported in September, timed to news of the show's release, an official description of the revival's plot and it's totally on par with this teaser.

"Spring breakers are getting murdered in Neptune, thereby decimating the seaside town’s lifeblood tourist industry. After Mars Investigations is hired by the parents of one of the victims to find their son's killer, Veronica is drawn into an epic eight-episode mystery that pits the enclave’s wealthy elites, who would rather put an end to the month-long bacchanalia, against a working class that relies on the cash influx that comes with being the West Coast’s answer to Daytona Beach."

Loyal Marshmallows already knew that the show was coming back on the streaming platform in the summer of 2019. Veronica Mars herself, Kristen Bell, celebrated news of a revival on Twitter back in September 2018. Posting that this summer would bring all three seasons of the show and the movie to Hulu for highly important binge-watching purposes, she also took time to announce the new limited series and thank "all the marshmallows for staying excited and to @Hulu for giving Veronica a chance to wear her big girl pants. I hope we’re still friends after I taser you."

Fans naturally freaked out and began cancelling tentative summer plans in order to catch-up on their fave show while prepping for the eight new one-hour episodes that will comprise the revival, per Entertainment Weekly.

The show's creator, Rob Thomas, even weighed in on the structure and tone of the limited series, suggesting a more overarching arc for its return rather than a different-case-each-week format. "I will say this: the movie was nostalgic. The Hulu limited series isn't going to be. Hardcore So-Cal noir. One big case. Eight episodes to tell the story. This is a detective show."

So, fans can expect a totally different vibe to the revival, though it's not for sure if the series will return indefinitely a la Will & Grace or stay strictly limited in the vein of Gilmore Girls: A Year in the Life. What is confirmed is the Neptune gang coming back to the Hulu revival. Returning cast members include Jason Dohring (Logan), Enrico Colantoni (Keith), Percy Daggs III (Wallace Fennel), Francis Capra (Weevil), and Max Greenfield (Deputy Leo). Veronica Mars will also welcome new actors such as Patton Oswalt into the fold, who will be playing Penn Epner, according to the reboot's IMDB page.

Shortly after news broke of the reboot in September, Bell went on SiriusXM’s Entertainment Weekly Radio to talk about the darker nature of the show's return. Bell described it as "a bigger world. It's definitely not going to be what we did on UPN or The CW. So I want to brace fans for that, that it's going to be darker and bigger and more cinematic and definitely a little bit different."

As if fans weren't already excited enough for a Veronica Mars return, a departure will add a freshness to the show when it hits Hulu this summer. If anything, this official teaser and release date announcement is only fanning the flames.