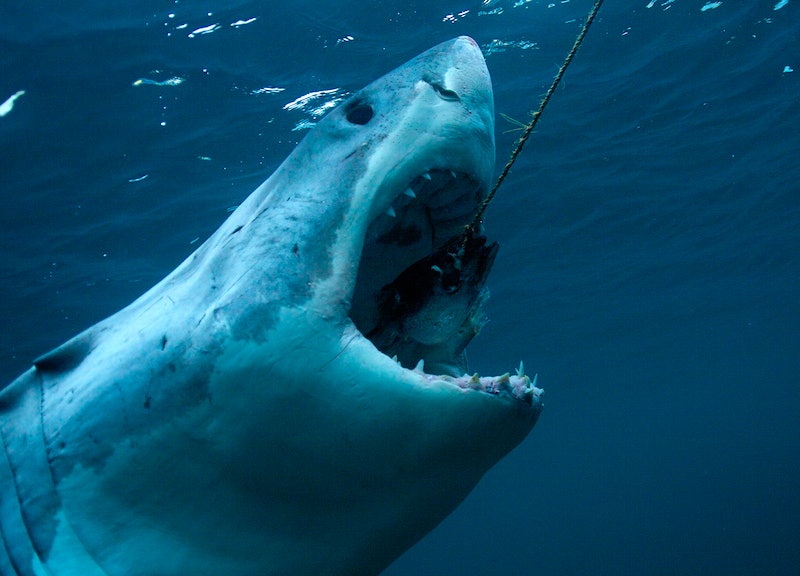 Seal the musician being brutally bitten and dragged out to sea by a great white shark — that's the imagery Shark Week puts forth in its 2017 promos. The Discovery Channel summer special has put shock value first throughout its 29 years on TV. Sure, the tide has shifted in recent years, with new Shark Week programs focusing on educational information about the much-maligned species. But, those changes can't completely erase the damage decades of bloody shark attack reenactments have done to the sharks' image. (Especially when the education comes packaged in episodes titled Devil Sharks and Return To The Isle Of Jaws). And, there's a major problem with tuning in for just one week annually: Sharks need our help right now more than ever. And, if they're going to survive, we can't afford to only pay attention to sharks for seven days. As 30 Rock's Tracy Jordan once said, we have to live every week like it's shark week.

Look, I know Shark Week is meant to be entertaining and fun, which it definitely is. But this is also a really big deal. The over 400 species of sharks that live in the sea are much more than television fodder — they're a key part of the ocean's health. "As primarily predatory animals, they help balance the food chain, maintaining healthy populations of other animals in their communities on the reefs as well as in the open ocean," Jennie Janssen, Assistant Curator at the National Aquarium says via email. So, it's terrifying that shark populations are already way down and declining even quicker. According to CNN, the last global shark study found that shark populations had fallen 90 percent since 1950. That research was conducted in 2003, but recent smaller studies are consistent with that number. A study published in March 2017 found that reef sharks' population was already down 90 percent.

The reason for those fast falling numbers can all be traced back to one problem: people. Despite sharks' top of the food chain status (and all those terrifying teeth), they remain vulnerable to human predation — primarily the type that seeks their fins for "delicacies" like shark fin soup or for traditional Asian medicines (which aren't even proven to work). Shark finning is illegal in America, but states still trade shark fins legally. And, in other countries where finning or trading is illegal, the laws are not always strictly enforced.

Janssen calls the finning practice "wasteful and cruel," because oftentimes sharks are harvested for their fins alone and dumped back into the water still alive, but destined to drown without the aid of their fins to help them swim.

Sharks aren't only in danger of being hunted. Every year, sharks die by accident — often getting caught in longline fishing nets, which can also trap sea turtles, dolphins, and whales.

Even though Shark Week has implemented educational information — including how to help sharks and why we shouldn't be afraid of them — it's fear that keeps people tuning in. Joshua Klapow, a clinical psychologist who hosts The Web radio show says via email that the Discovery Channel special likely appeals to people because "our fascination is very primal, very hard wired, and very much pulls from our survival instincts." He continues, "We are drawn towards that which actually scares us and poses a threat — it is our way of automatically learning and gaining insight as to protect ourselves from harm or death."

Some viewers are even leaving Shark Week more terrified of the species than they were at the start. According to Fortune, two Ph.D.s Suzannah Evans Comfort and Jessica Gall Myrick showed 500 people different Shark Week clips ranging in violence from actual shark attacks to simple shots of sharks swimming. This study found that "viewers were scared of the sharks after watching the footage, no matter how violent or peaceful."

"Sharks have more to fear from us than we do from them."

Once music is added to the clips, things get even worse for the sharks. A study from researchers at University of California-San Diego and Harvard found that playing dramatic music over videos of sharks swimming left the 2000 participants viewing sharks “significantly more negatively." As Shark Week often features an ominous soundtrack, this study is sobering. Any work the network is doing to change people's minds about sharks is so easily undone because of music choice.

It's this fear of sharks that leads humans to wipe out millions every year. In Western Australia, it was legal up until 2017 for fisherman to indiscriminately kill any shark they deemed a threat to people. And, shark "safety" nets trap and kill sharks at many Australian beaches. "We’re killing anywhere from 30-100 million sharks a year," says George Burgess in a phone interview. The Nat Geo WILD’s SharkFest expert and director at the Florida Program for Shark Research also says that when you compare that to the average of six human deaths caused by sharks per year, "Sharks have more to fear from us than we do from them."

Janssen and her colleague Alan Henningsen, Fishes Research Specialist at the National Aquarium, say that killing sharks at these high rates is especially problematic because it can take years for shark populations to recover. Much like humans, sharks can't start reproducing until they reach sexual maturity, which can take decades for larger sharks like great whites. Some species of sharks also only have a couple of babies at a time, after being pregnant for up to two years. Then those baby sharks have to start the years-long waiting process over before they can also repopulate. Overall, the time it takes for a shark to live long enough to be able to have babies and then actually give birth can never match the rate at which we're killing them each year.

But, these staggering stats don't mean hope is lost. The above Fortune article points out that Shark Week has a huge impact on how we view sharks, because it's one of the ways average people come into contact with the species. That means it has the potential to shift viewers' opinions of the animal if it continues to focus on education and conservation. The network has already made great strides since it pledged to change in 2015, (for example, multiple specials this year feature former shark attack victim Paul de Gelder advocating for the animals that once threatened his life). If Shark Week cuts out the ominous music and shifts away from those sensational titles (like Great White Serial Killer Lives), changing people's minds may happen even faster.

There are also ways to make that change yourself, without waiting for the network to make the first move. You can donate to non-profits doing cool things for sharks, like Oceana, Ocearch, and the Ocean Conservancy. You can also help the World Wildlife Fund and donate in memory of Rob Stewart. The filmmaker, who sadly passed away in 2016, made the enlightening documentary Sharkwater, which brought the finning industry to the wider attention of the public.

Janssen also recommends that people "support legislation that protects their environment and responsibly manages their fisheries." A bill was recently introduced to Congress that seeks to ban the trade of shark fins in America. Urge your representatives to add yours to the list of 12 states have banned shark fin sales. Finally, you can simply educate others about the dangers sharks face and how we need to be respectful of the sea. Because looking at where things stand now, we literally can't afford to not live every week like it's shark week.