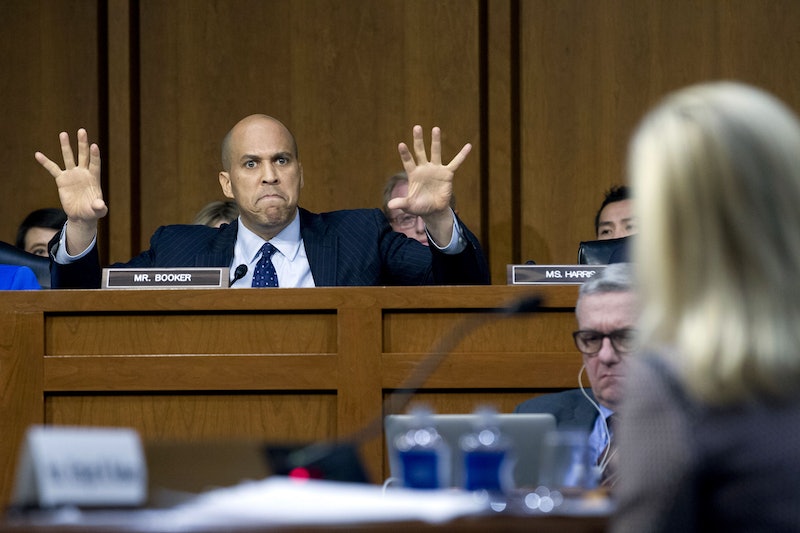 During a meeting with the Senate Judiciary Committee on Tuesday, the secretary of homeland security claimed the president did not use the word "shithole" while talking about immigration, though she admitted he did use "tough language." That denial was just enough to set off Sen. Cory Booker, who slammed Kirstjen Nielsen, secretary of Homeland Security, for being silent and complicit in an administration he says is full of bigotry.

Nielsen was testifying to the Senate Judiciary Committee for a hearing on oversight of Department of Homeland Security. When she was asked if Trump used the term "shithole," as has been widely reported, she said it was possible, but that she didn't hear it.

As Nielsen continued to defend the president, Booker, who was recently named to the judiciary committee, lost his patience. He gave statistics regarding violent instances committed by people who hold "hateful" ideas about minorities and listed incidents when white supremacists targeted minorities or people for their religion. Then, he told Nielsen the following:

The commander in chief in an Oval Office meeting referring to people from African countries and Haitians with the most vile and vulgar language. That language festers when ignorance and bigotry is aligned with power. It is a dangerous force in our country. Your silence and your amnesia is complicity.

Booker was referencing an April 2017 report from the Government Accountability Office that stated acts of violence by far-right white extremists had exceeded the amount of violence from Islamic extremists in the past 16 years.

"The fact pattern is clear of the threat in this country," Booker told Nielsen. "I hurt. When [Sen.] Dick Durbin called me, I had tears of rage in my eyes ... and for you not to feel that hurt and that pain, and to dismiss some of the questions from my colleagues ... that's unacceptable to me."

Nielsen had tried to end the conversation regarding the "shithole" comments.

I have been very patient with this line of questioning. I have nothing further to say about a meeting that happened over a week ago. I'd like to move forward.

Nielsen was confirmed to her position just more than a month ago, succeeding John Kelly as the DHS secretary. She was his chief of staff before Kelly became the president's chief of staff. Before then, Nielsen was president of Sunesis Consulting, a governance and compliance consulting firm, and was once a special assistant to President George W. Bush.

She responded to Booker's impassioned speech by stating that she abhors violence "in all of its forms" and agrees that the Department of Homeland Security has a duty to stop all kinds of violence, including white supremacist attacks.

"I share your passion," she said. "It's unacceptable. It can't be tolerated in the United States."