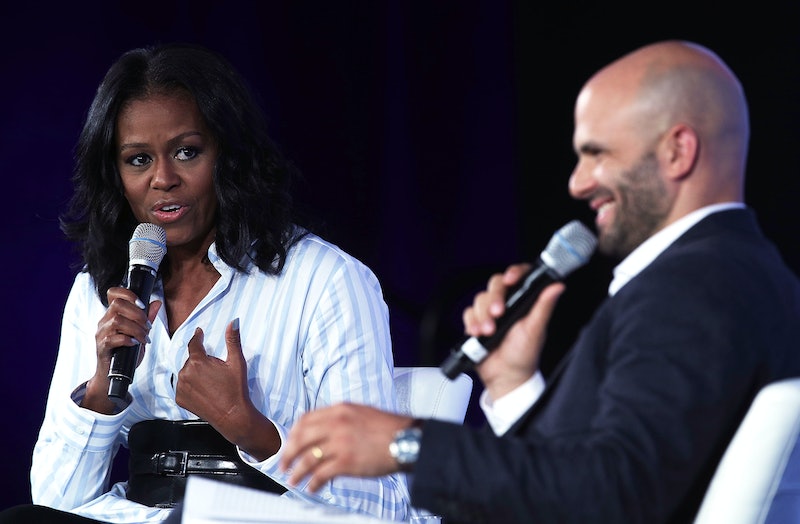 It was nothing less than a fun surprise when Michelle Obama honored Chance the Rapper at the BET Awards in a video that no one saw coming. The "forever First Lady" sent a sweet message to the BET Humanitarian Award winner to honor him for his selfless contributions to their hometown of Chicago, Illinois and for being a role model for children. "Time and again, he has been standing up, speaking out, and doing the work to get kids in our community the education they deserve," she said.

For those who may think Chicago is the only connection that the Obamas and Chance have in common, they actually go way back. The rapper's father, Ken Williams-Bennett, worked as former President Barack Obama's state director when he was a senator in IL, according to Esquire magazine.

Chance, whose real name is Chancelor Bennett, has worked tirelessly since he first came on the scene to raise awareness about innumerable issues that impact the black community. From gun violence in Chicago to the poor state of public school education, the 24-year-old has reshaped the image of being a rapper. You can have swagger and care about social justice. You can rap and raise awareness about the My Brother's Keepper initiative. Chance proves that it's possible to do it all.

Which also needs to be seen to be believed, so check out the transcript as well:

"Barack and I are so sorry that we can't be there tonight in person, but please know that we are with you in spirit and we are so incredibly proud of you Chance. We have known Chance and his family since he was a wee little baby rapper and it has been a thrill watching him come into his own in so many ways. In addition to making some really amazing music, Chance has been taking that big bright spotlight that follows him around and he's shining it on young people in our home town of Chicago. Time and again, he has been standing up, speaking out, and doing the work to get kids in our community the education they deserve. And with these passionate efforts, Chance is showing our young people that they matter, that they have something inside of them that is worthy of being expressed, and that they have so much to contribute to their communities and to our country. Chance, you are an outstanding role model and an inspiration to all of us who care about our next generation. Because of you, countless young people will grow up believing in themselves, fulfilling their god given potential and then reaching back and lifting up other people along the way. I can think of no better legacy to leave and I am thrilled to celebrate you here tonight and honored to call you my friend. Thanks so much for everything you do. Congratulations and God bless."

There wasn't a dry eye in the house afterward, I'm sure.

More like this
What Is Megan Thee Stallion’s Net Worth? The Traumazine Hitmaker Isn’t Worried About A Budget
By Hugh McIntyre
Christina Aguilera Took A Powerful Stand At Brighton Pride
By Sam Ramsden
Are John Legend & Kanye West Still Friends? The Singer’s Latest Update Is Candid
By Brad Witter
'Scream’s Courteney Cox Has Broken A Major Horror Record
By Sophie McEvoy
Get Even More From Bustle — Sign Up For The Newsletter