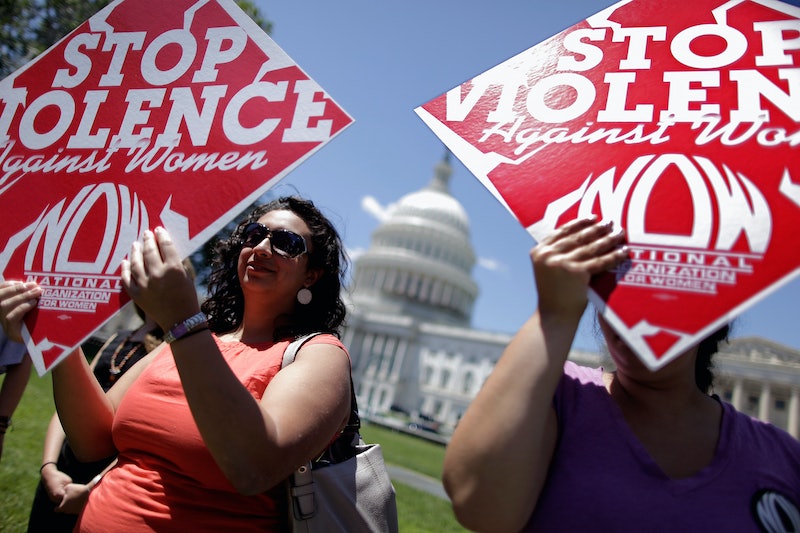 As Congress managed to avoid a second government shutdown on Thursday with legislation that would fund the government through September, it failed to save a law designed to improve how communities and the criminal justice system respond to stalking, sexual assault, and domestic and dating violence. But while the Violence Against Women Act lapsed again at midnight Friday, the law could be brought back with a few added provisions.

Arguments over extending the Violence Against Women Act reportedly ended up being "one of the final hold-ups" in negotiations to fund the government and avoid a second shutdown, Politico reported. At least part of the issue appeared to be Democrats' desire to overhaul the law by expanding it to include, among other things, protections for the transgender community.

According to CNN, Democrats sought to keep a Republican-approved "clean" reauthorization of the Violence Against Women Act out of the spending bill as they felt they'd have greater leverage negotiating an overhaul of the law if it wasn't attached to an appropriations bill. What's more, they've told both CNN and The Hill that the law's lapse likely won't have an impact on the resources domestic violence and sexual assault survivors rely on as the Department of Justice and the Department of Health and Human Services funds most programs.

Republicans, however, have accused Democrats of partisan game playing. "For whatever misguided reason, Speaker Pelosi has decided to take a noncontroversial clean extension of the Violence Against Women Act as a bargaining chip," a spokeswoman for Minority House Leader Kevin McCarthy told The Hill.

While Democrats' efforts to pass legislation authorizing the Violence Against Women Act for a full five years failed to gain significant traction in 2018, when Republicans held a tight grip on Congress, they reportedly hope to introduce a full reauthorization of the act in March, The Hill has reported. That reauthorization may also include provisions aimed at overhauling the law to include protections for transgender people and Native American women, expanded youth education and prevention programs, and stricter gun laws for those convicted of domestic violence.

In 2018, then-House Minority Leader Nancy Pelosi harshly criticized Republican members of Congress for opting to work a short-term extension of the Violence Against Women Act into a spending bill rather than supporting Rep. Sheila Jackson Lee's long-term authorization bill. "Republicans' decision to include only a short-term VAWA reauthorization in the must-pass minibus spending bill is nothing short of an abdication of our responsibilities to women in our country," Pelosi wrote in September in a letter to then-House Speaker Paul Ryan.

She also condemned Republicans' apparent refusal to extend the act's protections to other groups. "As Members of Congress, it is our responsibility to ensure that every woman, in every part of our society, can live free from violence," she wrote. "Yet, the continued refusal over many years of House Republicans to extend VAWA's critical protections to include vulnerable communities, particularly Native American, immigrant, and LGBTQ communities, represents a blatant dereliction of that duty."

On Friday, as the Violence Against Women Act was set to expire, its author former Vice President Joe Biden criticized legislators for turning the law "into a political football" and urged Congress to "pass a strong reauthorization" of the act.