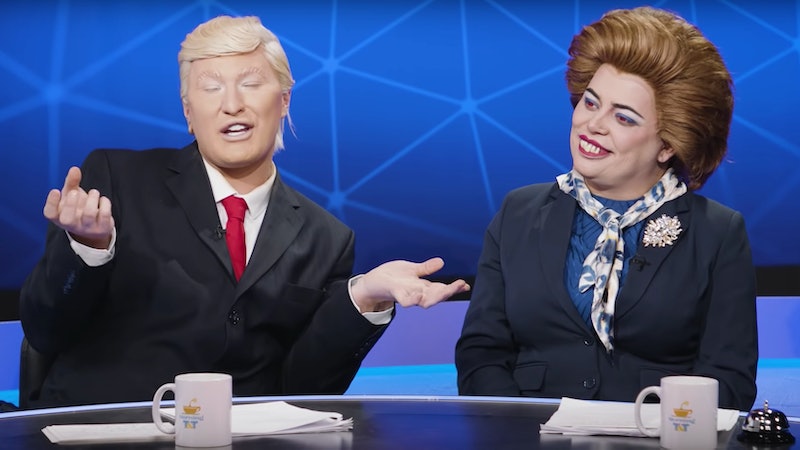 I may be slightly biased being a Brit and all, but Baga Chipz and The Vivienne's Snatch Game performances have got to be the best in Drag Race history. Drag Race's production company World of Wonder seems to agree, as they've commissioned a digital series with the two reprising their roles as Margaret Thatcher and Donald Trump. So when is Morning T&T's release date, and where can you watch it?

Well, if you're wallowing in post-Drag Race blues after the finale of the first UK season, you're in luck as it premieres today (Dec. 12). The series is essentially a spoof of morning shows, only with Margaret Thatcher and Donald Trump at the desk instead of Piers Morgan and Susanna Reid. "It's like a spoof of Good Morning Britain and Good Morning America," The Vivienne recently told Gay Times. "It's Donald Trump and Margaret Thacher having this weird on-screen romance, reading ridiculous news stories, some true and some false."

Despite being the Drag Race UK's first spin-off, Morning T&T is only available on WOW Presents Plus at the moment. Thankfully, UK viewers are eligible for a subscription, which costs £3.49 monthly and £35.99 annually. If you've never used the streaming service before, it's the home of all things Drag Race with documentaries and spin-offs galore. Here you can watch the first ten seasons of the original Drag Race, the first three of All Stars, panels from RuPaul's Drag Con, and spin-off series like Not Today Bianca.

Another UK spin-off will soon be added to the roster, as part of The Vivienne's prize for winning Drag Race UK includes her own series. As Digital Spy writes, The Vivienne Takes Hollywood will be available to stream sometime in 2020. Whether or not that's on BBC Three or WOW's service remains to be seen, but regardless it's going to be one hell of a trip Stateside.

"We haven't got the final cutout of what we wanna do yet, but it's definitely going to be along the lines of, 'The Vivienne takes Hollywood," she told Gay Times. "We shall see! I want a cameo in Jurassic World 3, so..."