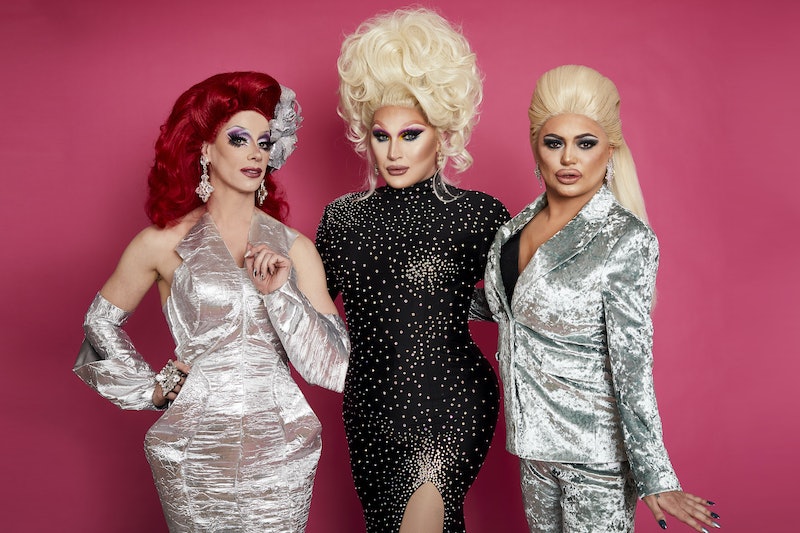 If you thought the first ever series of RuPaul's Drag Race UK was over for good, you'd better re-start your engines, because the reality-competition has one more surprise in-store. Yes, fans of the BBC Three hit were no doubt thrilled to learn of the upcoming finale special, which follows our favourite queens as they get together and enjoy the last episode of the season — and if you can't wait to see their reaction to what went down, here's what to expect in RuPaul's Drag Race UK: It's A Wrap.

As Digital Spy reports, the show's first string of episodes wrapped up for good just last week, but thankfully, fans are in for one final treat, as RuPaul's Drag Race UK: It's a Wrap is set to air on BBC iPlayer this evening. The post-finale special will display finalists The Vivienne, Divina de Campo, and Baga Chipz, as they settle down to watch the Drag Race UK grand final together for the very first time. Viewers will then also get to see the moment all previously eliminated queens, and the finalists friends and family, discover the identity of this year's winner. And if that wasn't enough excitement for one day, the It's a Wrap special will also see the queens, along with judges RuPaul, Michelle Visage, Graham Norton and Alan Carr, reflect on their own highlights from the past series.

Following their stint on the groundbreaking series, many of the show's queens are putting their new-found fame to good use, including Yorkshire's own Divina de Campo, who recently dropped her debut single "A Drag Race Song." However, despite sashaying her way into the final two, de Campo didn't always feel like such a formidable force during her Drag Race UK experience, and revealed that she came very close to quitting the BBC series all together. As the Metro reports, the runner-up explained how she almost threw in the towel as early as week two, and often doubted her need compete — especially when considering her already successful career and "really good fanbase." Thankfully for us, de Campo stuck it out, and went on to become one of the show's fiercest competitors.

If you're already experiencing the Drag Race blues, you can catch this year's lineup of queens one last time on RuPaul's Drag Race UK: It's a Wrap on BBC iPlayer at 8 p.m. tonight. I can't wait.