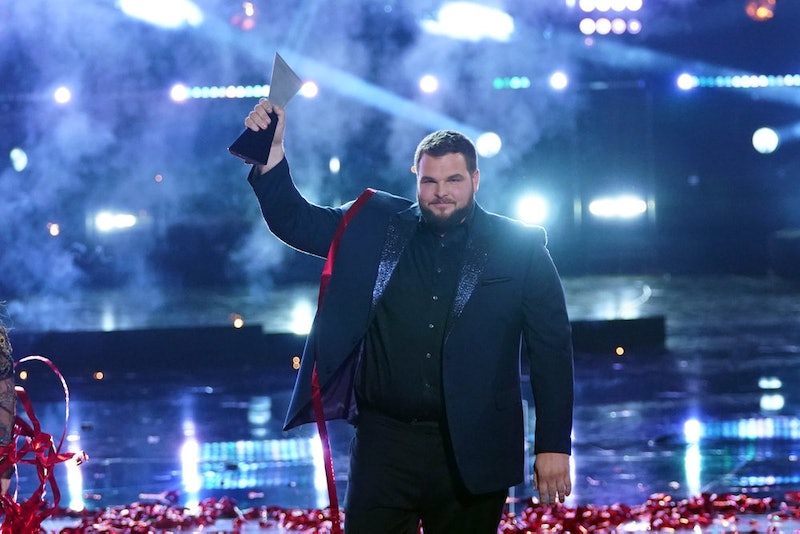 On Tuesday, Dec. 17, counter singer Jake Hoot won The Voice Season 17. The country singer currently lives in Cookeville, Tennessee, but was born in Texas and grew up in the Dominican Republic, according to People, where his parents were missionaries. Last night, Hoot was up against three formidable opponents: Ricky Duran, Katie Kadan, and Rose Short, who placed second, third, and fourth, respectively. "It means the world," he said during a press conference after his win, per People. "I think I went out of breath. I lost all my breath when they announced my name."

During Night 1 of the two-night finale, Hoot performed his original song, "Better Off Without You," the Lonestar track "Amazed," and "Wintersong" with his coach, Kelly Clarkson. In Part 2, Hoot performed "Over Drinking" with Little Big Town before going on to win the prize.

It's incredible that Hoot went on to win the whole competition, since the Washington Post pointed out that Clarkson was the only judge to turn her chair around during Hoot's blind audition. "Having Kelly believe in me from the get-go and being here tonight is just an incredible thing," the country singer told People in the same interview.

But although his fans, who are called Hooters, are ecstatic for the country singer, there's a large faction of Voice viewers who are upset that Katie lost. One fan was upset that yet another country singer had won the competition.

Indeed, Hoot is now the sixth country singer to win The Voice, the Washington Post said, joining the ranks of Cassadee Pope, Danielle Bradbery, Craig Wayne Boyd, Sundance Head, and Season 15 winner Chevel Shepherd. This is Clarkson's third win as a coach, according to People, after Season 14's Brynn Cartelli and the aforementioned Shepherd.

And Clarkson's confidence in him was well-placed. "I just sat there and encouraged him," she told People. "I'm a pretty good cheerleader because I love humans. I literally am a glorified cheerleader, y'all, I did nothing. He did everything."

After his win, Hoot's plans are simple. "I'm going to be celebrating with my girls," he stated, per People. The singer shares a 4-year-old daughter with his ex-wife, the article reported, and is also dating a woman with a child.

"This has been an incredible experience and I will say the hardest part is just being gone from them," Hoot continued. "So any time I get to spend with them tonight, I'm looking forward to. Snuggles all the time."