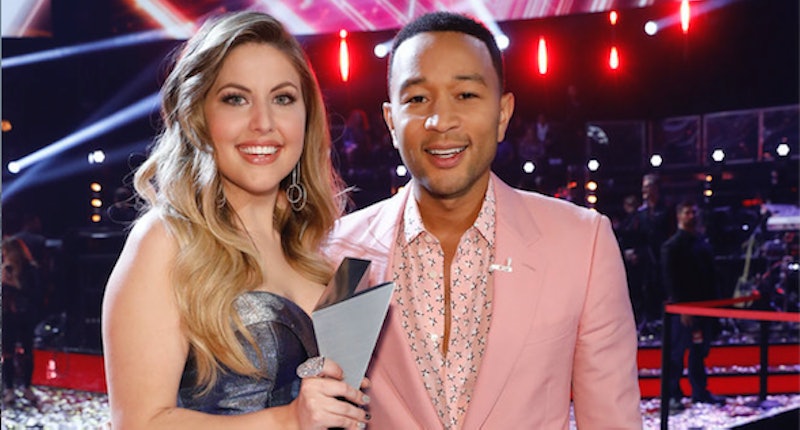 He may be new to the show, but John Legend saw "the magic" in Voice winner Maelyn Jarmon immediately, which is why he hoped to be her coach. Thankfully, the feeling was mutual, and with Legend's help, Jarmon went from stealing the hearts of The Voice's four judges to landing the votes of thousands of fans across America. Ultimately, Jarmon won because of her hard work and raw talent, but she says she wouldn't have wanted anyone else by her side, because there's one thing Legend offered that the other judges couldn't.

"The reason I chose John over the other coaches was that he is new to this show and I figured that he would have, he would be fresh and excited, and [that's] exactly what happened," Jarmon tells Bustle. "He's also such a storyteller, such a great musician, an amazing writer. I just really wanted to get the chance to work with him because I felt like we were on the same wavelength as artists, and he was just an absolute dream."

Jarmon competed against three other finalists for the winning title — Andrew Sevener, Gyth Rigdon, and Dexter Roberts — all of whom were country artists coached by reigning Voice champ Blake Shelton. Jarmon says it was nerve-wracking to be the minority of the group, but that in the end, it may have given her a leg up.

"It was a tough challenge, you know. They're amazing musicians and country is very, very well-liked in America. And Blake is very well-liked," she says. "We were up against really hard odds. To beat out three guys who were fantastic musicians and artists, and you just never know what's going to happen. But I think that being the only woman and being the only non-country singer actually gave me a little bit of advantage to stand out."

Jarmon adds that her biggest challenge was remaining confident, as the competition's high-pressure environment often felt overwhelming. But Legend taught her to believe in herself. "My biggest challenge was trusting myself. John really helped with that," she says. "He was always amazing about encouraging my instincts and telling me that all my choices were great."

Before she stepped onto The Voice stage, Jarmon was doing cover gigs across New York. That's how she fell in love with arranging music, which eventually led her to writing her own songs. After posting one on Instagram, a producer from the show reached out to her to request an audition, but she was initially hesitant.

"At that point, I was like, 'Aw man, I don't know,' because I really didn't think that my voice was right," she says. "I don't know why necessarily. I think I thought, 'Oh they want belters and rippers and that's not really me,' and 'Am I gonna be able to handle that kind of pressure?' I just didn't know what it would be like. But at that point I was like, 'You know what? The biggest regret will be not knowing and going through life wondering if that would have made a huge difference for me, and it has.'"

Thanks to her taking a chance on herself — and Legend's guidance —Jarmon now has an album to record, and she's eager to get back to work. But first, she needs to relax and reboot. "I will be decompressing for a little bit," she says. "Taking a little tiny week to myself to rest, rest my voice, eat some queso" — both things which coach Legend would definitely approve.