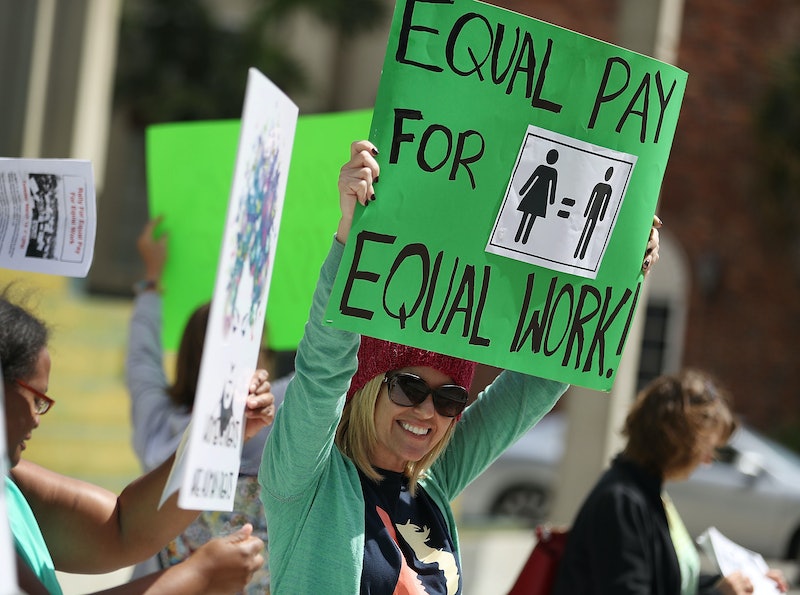 Two competing bills aimed at addressing the gender wage gap made their way around Capitol Hill this week. Hours before Democrats' Paycheck Fairness Act passed through the House on Wednesday, Rep. Elise Stefanik (R-New York) introduced her own bill. The WAGE Equity Act is Republicans' answer to pay gaps between men and women in the workforce, and the two bills take a pretty different approach to tackling the same problem.

"The WAGE Equity Act is a prime example of Republicans leading on women's empowerment, and is a stark contrast to the Democrat’s legislation which prioritizes trial lawyers over employees and businesses," Stefanik said in a Wednesday press release. "I urge my Democrat colleagues to consider this legislation as a practical alternative that strengthens equal pay for equal work without the unnecessary frivolous lawsuits and burdens on businesses."

The text of the bill wasn't available online as of Thursday morning, but Stefanik outlined some of its main components. If passed, the act would implement a "self-audit" system to encourage employers to be proactive when it comes to closing the pay gap. Republicans argue that Democrats' Paycheck Fairness Act — which passed a vote in the House on Wednesday with the support of seven Republicans — is overly focused on penalizing employers for discrimination, as opposed to incentivizing them to improve their practices, according to Politico.

"Democrats want women to sue their bosses; Republicans want women to become the bosses," Rep. Virginia Foxx (R-North Carolina) said on the House floor on Wednesday, per The Hill.

The Democrats' bill does contain some measures that reward good employer behavior, such as establishing a National Award for Pay Equity in the Workplace that would be awarded annually to a business taking steps to combat the pay gap. But it also places the burden on businesses to prove that any existing wage gap has no relation to gender and is necessary for the business.

If it becomes law, the Paycheck Fairness Act would remove limits to the compensatory damages that plaintiffs can seek in an equal pay lawsuit and automatically make every potential victim of pay discrimination part of any class-action lawsuit filed against a workplace unless they "opt out."

Under the WAGE Equity Act, the Government Accountability Office would have to study the "manager's gap," which Stefanik's press release describes as "the time when many women leave the workforce for parental reasons." The release says that this gap "has been shown to be a significant cause of pay inequity."

The Paycheck Fairness Act, on the other hand, would require more extensive data collection by compelling the Equal Employment Opportunity Commission to collect data from employers that breaks down their worker pay by gender, race, and nationality. Stefanik argues that this approach would be more expensive.

When it comes to talking about pay, the Paycheck Fairness Act would prevent employers from asking job candidates about their previous salaries, which can cause pay disparities that endure across jobs. It would also allow employees to discuss their salaries in the workplace.

The WAGE Equity Act takes a more lenient stance on employers who prohibit employees from discussing their wages, however. Stefanik's press release says the bill "protects employee ability to discuss compensation with their colleagues while giving employers the right to set reasonable limitations on the time, location, and manner of this activity."

Aside from the central issue at stake, the only policy plan the two bills share is authorizing grants for training women how to negotiate for better salaries.