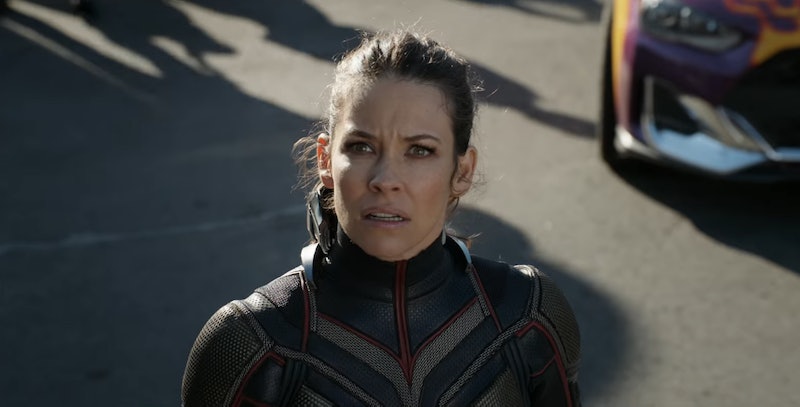 When Marvel fans check out the new movie Ant-Man and the Wasp, the titular Wasp they'll be seeing is not one they'll have come across in the comics. The Wasp in the Marvel comics with Ant-Man is not the character played by Evangeline Lilly in the movie, Hope van Dyne. Instead, the Wasp from the comics was either Hope's mother, Janet van Dyne, who is played by Michelle Pfeiffer in the film, or a newer Wasp, named Nadia, from more recent comics.

In the original comics, Janet van Dyne/The Wasp is one of the founding members of the Avengers and is married to Hank Pym, who is the original Ant-Man, among other alter egos. In the Ant-Man movies, though, Janet is stuck inside the quantum realm after a mission gone astray. For this reason, and with the help of her father, Hope van Dyne takes over her mother's role of The Wasp with one of her goals being to find her mom.

Hope does exist in the comic world, but as a different character — a villainous one. In the MC2 (Marvel Comics 2) universe, which shows an alternate timeline, Janet and Hank have twins, Hope and Henry. After Janet and Hank die, Hope becomes the villain Red Queen, who founds The Revengers. According to Comic Book Movie, the Red Queen didn't appear anywhere outside of the MC2 world comics. "By utilizing the 'Hope' character (in a non-villain capacity), Marvel Studios' now has the ability to portray Hank Pym and Janet van Dyne TOGETHER as Ant-Man and The Wasp, but still have A wasp in the modern day setting, alongside Pym protege, Scott Lang (played by Paul Rudd)," the site explains.

There is also a Wasp named Nadia in newer comics — in a different timeline — who is also meant to be the daughter of Hank Pym. As Screen Rant points out, Nadia means "hope" in Russian.

Basically, because of the multiple Marvel universes, multiple incarnations of superheroes and supervillains, and the many comics, as well as the Marvel Cinematic Universe, there's a lot going on. Therefore, the MCU plays around with different timelines and how characters are shown in them. Ant-Man and the Wasp chose to go with Hope van Dyne as the Wasp not because of the comics so much as because it worked for the larger story being told.

Then there's the matter of her name. In the comics that feature the Red Queen, Hope has the last name Pym. In the movie, Hope is Hope van Dyne — her mother's last name. Unlike everything else, this one is pretty easy to explain. As explained in the first Ant-Man movie, Hope decided to take her mother's last name while she was estranged from her father. Of course, now we know that they made up during the movie and started working together.

As for her plotline, Ant-Man and the Wasp won't be an origin story for Hope as she transitions into being the Wasp. Obviously, that would have had to be created by the filmmakers, or at least pieced together from multiple iterations of the Wasp, since it doesn't exist in the comics. But as Lilly explained during a set visit in 2017, the main reason that Ant-Man and the Wasp isn't an origin story goes beyond the connection to the comics.

"It’s two years after you last saw Hope van Dyne, a lot has happened that you don’t get to see," Lilly said, as reported by Bustle. "Instead of seeing her evolved into a superhero, the leap we take with the audience is we all believed by the end of Ant-Man she’s ready to be a superhero, that there doesn't need to necessarily be that origin journey of why and how and learning the skills it requires to a superhero. Instead, we make that leap of faith of saying you know she’s kickass. So let her just do that and be that, and then let’s explore some of the other emotional throughlines of her life and her story."

This means that while Hope will help Scott defeat the movie's big villain, Ghost, she will also be on her own mission of finding her mother in the quantum realm. "We decided this movie’s going to be Ant-Man and the Wasp, it’s not Ant-Man with the Wasp," director Peyton Reed explained at the set visit. "It is important to tell those stories separately and invest in each of the characters’ journey and arc in the movie. One of the big things about this is what’s going on with Hope and the fact that she has the mission that is happening entirely separate of Scott. It's vital and it’s not her dad’s mission. It’s her mission."

Fans can see Hope tackle her mission and learn more about the new, fully-formed Wasp when Ant-Man and the Wasp hits theaters July 6.

More like this
The 50 Most Powerful Characters In The Marvel Universe, Ranked
By Johnny Brayson and Nola Pfau
These 25 International Horror Movies On Netflix Prove Fear Is A Universal Language
By Bustle Editors
Everything You Need To Know About The 'Knives Out' Sequel
By Bustle Editors
A New Scooby-Doo Movie Confirmed Velma Is Gay & Twitter Is Pumped
By Radhika Menon
Get Even More From Bustle — Sign Up For The Newsletter