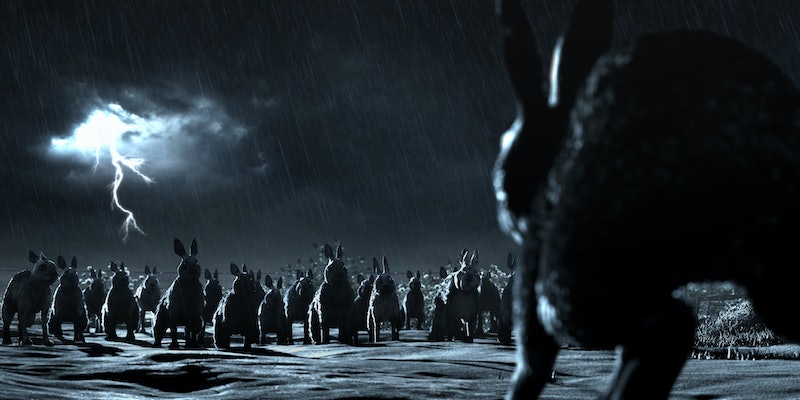 It's easy to think of rabbits as sweet little fluffy, nose twitching creatures, that are all cuddly and adorable. But guys, have you read Watership Down? Those little furry beasts' lives are cray. And you know why? People suck. OK, so maybe this is a fictionalised version of the lives of a load of rabbits but, y'all, seriously. There is a lot more to these particular rabbits' lives than chomping on carrots, humping, and being all cute. The Watership Down book ending is happy, but with a hell of a lot of darkness and sadness thrown in for good measure.

So the whole story is about a rabbit called Hazel trying to lead a load of other rabbits to a new warren after his younger brother Fiver predicts something dangerous is going to happen. Turns out Fiver is frickin' psychic and is in the know about future goings on. Think Mystic Meg but like, with bunny ears and a coat of lovely fluffy hair.

So our boy Hazel gets everyone to safety eventually, after going through like a lot of danger, drama, and death. Yikes. In the end he lives a really lovely life with his new warren all great and everything, and then he leaves his earthly body, shuttling off this mortal coil and nipping off to the leporine (which is a fancy AF word for hares) spiritual plane.

If you haven't read the book, I am sure you saw the 1978 film. Or at least you have heard about the traumatising as heck scenes with a lot of pretty hardcore brutality in. Well, the remake which is set to air this week is far less focussed on the brutality, but the darkness very much remains.

Speaking to The Telegraph the show's executive producer Rory Aitken was keen to let people know that this time round, it will be a bit less, erm, scarring. "It’s grown this reputation for being scarring and horrific and brutal, and actually that’s not what the essence of the story is. While we won’t shy away from the darkness in the book, visually it won’t be as brutal and scarring."

Yeah, y'all did you know the OG film had a U rating? Yep, and according to the British Board of Film Classification they have received a complaint almost every year since its classification.

The thing is though, the story is an epic, and epics tend to get pretty dark. This version, which is the first production made with the BBC and Netflix aims to change the bad reputation the story has gained. Aitken said "It’s not a terrifying, brutal story. I think that in a way we want to restore the reputation that the book should have as one of the great adventure stories of all time."

Like every great show with the BBC involved, there is an absolute slew of homegrown talent. James McAvoy will voice the lead character Hazel, and Nicholas Hoult will be his psychic little brother, Fiver. Sir Ben Kingsley plays the nasty old General Woundwort, and John Boyega is Bigwig.

Meanwhile Olivia Colman is voicing Strawberry, Gemma Arterton is Clover, and Anne-Marie Duff is lending her tones as Hyzenthlay.

The story will unfold across parts and is one of the shows in this year's BBC Christmas schedule.