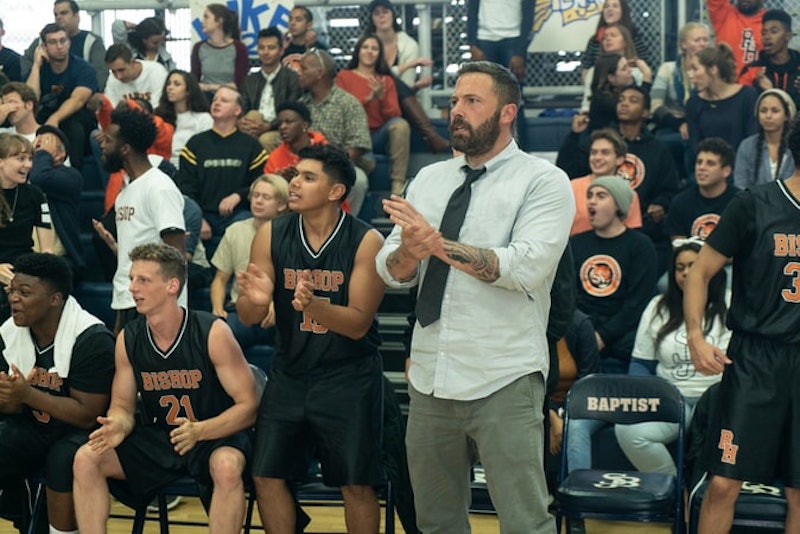 In the new sports drama The Way Back, Ben Affleck stars as a high school basketball coach who's wrestling with some demons. A star player in high school, Jack Cunningham turned down a scholarship to play basketball at a prestigious university and went down a different path — developing a drinking problem that eventually led to a divorce. But by the beginning of the film, he's offered a shot at redemption when he becomes the basketball coach of his old high school. The redemptive and inspirational story sounds par for the course for a sports drama, but is The Way Back a true story?

Although many sports dramas are based on inspirational true stories — such as Miracle, Remember the Titans, and Glory Road — The Way Back is not one of them. The movie is fictional, with all characters and events having no real-life counterparts.

However, the film will still feel real to many viewers as a stark example of art imitating life. That's because Affleck has undergone a highly-publicized battle with alcoholism himself in recent years, and it's nearly impossible to not see the similarities between his real-life struggles and those of his character in The Way Back. And there's a good reason why Affleck's depiction of a recovering alcoholic feels so real: the actor brought his own personal demons to the role.

The film's director, Gavin O'Connor (who also helmed Miracle), convinced Affleck to personalize his character to mimic the actor's own struggles. "I honestly was not at all aware of Ben’s drinking issues," O'Connor told the Philadelphia Inquirer. "When he called me about doing the movie, and we met for dinner and he started to open up about his alcoholism, that’s really the first time I started thinking about the implications." The director later realized that Affleck's own battle with alcoholism would have to be tapped into for the performance. "I said, 'Ben, the only way we can do this is if you are not only willing to confront the disease, but open up that box and let the demons out. And they are your demons because those are the character’s demons, they are running parallel. If you are unwilling to do that in an authentic way, then we’re wasting our time,'" O'Connor said.

Affleck went back into rehab prior to filming, finishing his program just in time to start the shoot. "Ben had literally gotten out of rehab the day we started shooting the movie," O’Connor added. "I had a very raw, very vulnerable actor who was really just open and available."

Affleck even shared that he thinks his role in the film helped improve his own life, as he went through a similar journey to the one his character takes on screen. "One of those weird parallel things happened in this movie," Affleck told Variety. "In the story, the coach gets more from the players than the players get from him ultimately. I feel that way about the young men who play those players."

The Way Back isn't a true story, but thanks to the casting of Ben Affleck as a recovering alcoholic and thoughtful direction from Gavin O'Connor, it sure rings true.