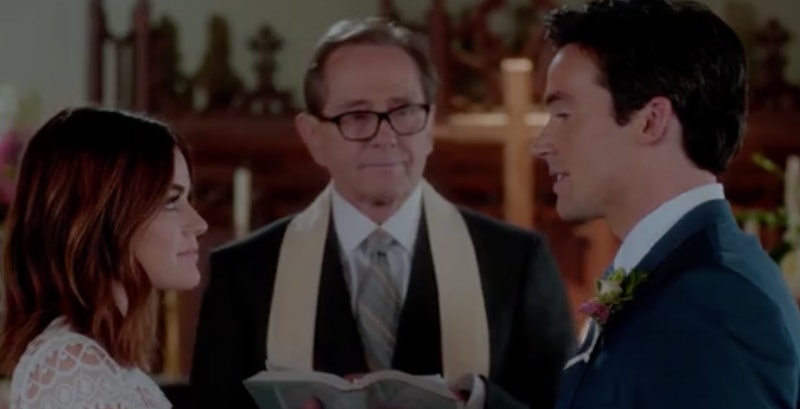 Despite all the heat the finale is getting on Twitter, it was pretty glorious. Few viewers watch Pretty Little Liars for its realism, and, as such, the bizarre A.D. reveal felt perfect for the show. But one weird plot hole in the Pretty Little Liars finale starkly contradicted the world I. Marlene King had constructed, and this felt like the real problem with the final installment. For a show that places such an emphasis on the importance of family, Mike Montgomery's absence at Aria's wedding is a huge oversight.

The former lacrosse player wasn't in the episode at all — something that many others have been quick to pick up on. After all, this was someone that the series dedicated hours and hours to. Remember his rage issues following his parents' divorce? His on-again-off-again relationship with Mona that so many people were rooting for? His problems with depression? This wasn't some minor, forgettable role. This was a fully fleshed-out character, and it made little to no sense that the formerly troubled teen wasn't there to see his sister enter the next stage of her life.

And it's definitely falls into the category of a plot hole, because this could have easily been explained away. His distaste for Aria and Ezra's relationship wasn't exactly a secret in the bad old days. If Aria's parents had let us know he'd chosen to deliberately skip the wedding as a protest, nobody would have been surprised.

Heck, even if Mike had completely changed his mind about the romantic union (much like Byron's odd endorsement of his daughter marrying a guy she first met when he taught her as a 15 year old just because Ezra didn't actively try and win his approval), a concrete reason as to his absence would have been another way to account for him not being there. A gap year in New Zealand, an accident while working somewhere very far away that had landed him in the hospital days before the wedding, just something to explain why a family as close as the Montgomeries are would let Mike's complete no-show pass unremarked.

This was a kid who was unbelievably invested in his family. When Byron reveals in Season 1 Episode 13 "Know Your Frenemies" that he and Ella have decided to see other people, Mike is devastated enough to flounce off. In Season 1 Episode 20 "Someone To Watch Over Me," he gets mad at Arya for keeping secrets about her as-yet-unnamed romance, stating that it's creating tension between their parents and making them fight more. Mike's descent into criminality, with him trying to breaking into the DiLaurentis house in Season 2 Episode 5 "The Devil You Know," seems to have been prompted by his parents' relationship issues. And, while he has rocky patches with Aria, ultimately he has some version of her best interests at heart.

When Aria reveals she's in a relationship with her high school teacher in Season 2 Episode 14 "Through Many Dangers, Toils, And Snares", he punches Ezra, but later reveals that this was only because he was afraid their father would punch him first. In Season 4 Episode 6 "Under The Gun," while he accuses her of having hooked up with a friend of his (as per the rumors), when Aria gets upset, he's remorseful and apologizes. As such, it's really hard to buy him skipping his own sister's wedding or them drifting apart to such a degree that he could skip without anyone mentioning him at all. That just isn't the Mike Montgomery we've been led to understand or the Montgomery family as we know them.

Maybe there's an alternate ending that will explain away the best brother on the show not being there on the happiest day of his sister's life. Or maybe, more disappointingly, it was just a complete oversight.