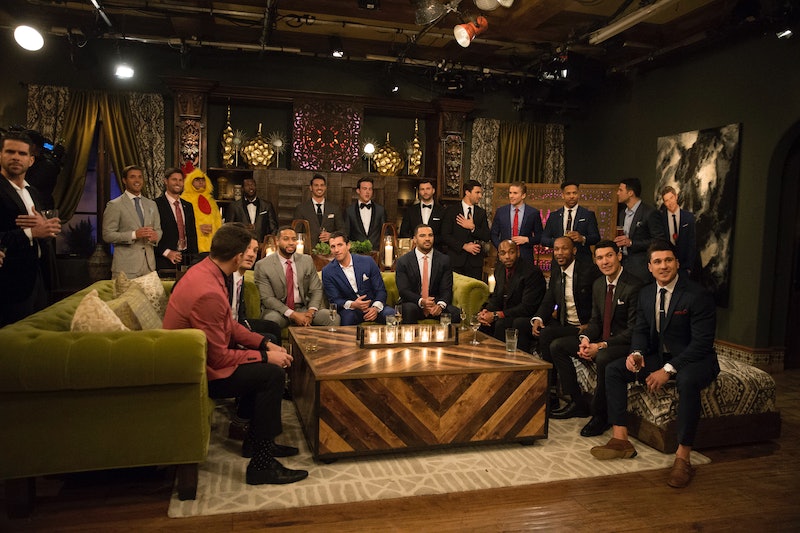 Bachelor Nation, the time has come. A new season of The Bachelorette is finally almost here. To get fans even more excited about the reality series, which premieres on May 28, the men were announced on May 17. And, as always, some of the Bachelorette contestants' jobs are very interesting.

In addition to all of the athletes and salesmen competing for Becca Kufrin's heart on the show, there are also contestants with jobs that rival even the pantsapreneurs and chicken enthusiasts of yesteryear. Chris Harrison revealed all of the men with their bios on a Facebook Live video. Even the host extraordinaire had a few quips to throw in about the guys during the video. He joked about how one about contestant, David, arrives at the mansion in a chicken costume. Yep, a chicken costume. Is it really night one of The Bachelor or Bachelorette without someone dressing up in a ridiculous outfit?

Fans will be able to find out even more details about the guys (including any other weird first night antics) when the show premiers on May 28. Until then, tide yourself over with all of the odd job-related info about this season's Bachelorette contestants. Seriously, there are some truly interesting "careers" this time around.

More like this
The Latest 'Bachelorette' Shake-Up Finally Splits Gabby's & Rachel's Journeys
By Kadin Burnett
Gabby & Rachel Reveal How That 'Bachelorette' Rose Ceremony Twist Happened
By Grace Wehniainen
Everything To Know About 'Bachelor' Host Jesse Palmer
By Justice Namaste and Radhika Menon
Why Did Hayden Get Sent Home On 'The Bachelorette'?
By Alyssa Lapid
Get Even More From Bustle — Sign Up For The Newsletter