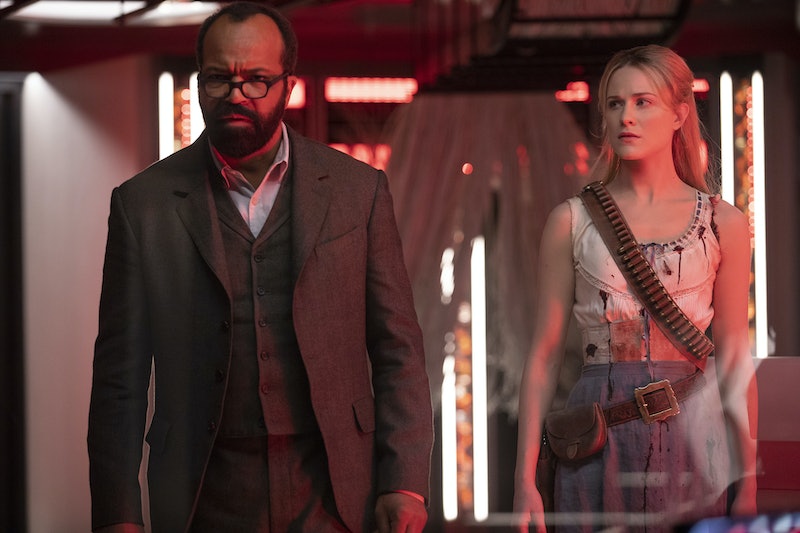 It's been 630 days since Westworld aired its second season finale, and — like the characters — viewers will find themselves in a brave new world when Season 3 begins. That means you'll likely be in need of a Westworld Season 2 recap while trying to make sense of whatever new, confounding twists the show has in store.

Season 1 of the HBO series (subtitled "The Maze") saw the inception of a robot rebellion as the hosts gradually gained self-awareness and rose up against their human creators. Whereas that season was about the search for and definition of consciousness, Season 2 (subtitled "The Door") dealt largely with questions of fate and free will, as the robot rebellion entered full swing and engulfed Westworld and its neighboring parks.

Season 3 of Westworld (subtitled "The New World") is finally leaving the park behind, as the hosts' fight for freedom extends to the mainland. But which hosts made it out of Westworld? Which are still trapped there? What did they find at "The Door" to help them wage their war against humanity? It was hard enough keeping track of Season 2's time-warped adventures as they were happening, much less two years later. Here's what you need to remember before booting up Season 3.

After searching for The Maze throughout Season 1, William was disappointed to learn that (like he'd been warned time after time) it wasn't meant for him. The Maze was a metaphor for consciousness, a journey designed for the hosts to go on in order to achieve full self-awareness. But in Season 2, Robert Ford designed a game that was meant for William: a quest to find The Door. Behind that door, William would be faced with his greatest mistake — and a chance to atone for it.

Along the way, William grew increasingly paranoid about his own humanity (or lack thereof), as Robert's extensive meddling led him to believe that everything was part of the Westworld founder's game — even his own daughter, Emily. Convinced she was a host sent to torment him, William gunned her down, only to learn to his dismay that she was real. Past any hope of redemption, William was brought low by Dolores just outside the Door (which was revealed to lead to the Forge), where he was left behind and wounded to be found by Delos.

In the finale's post-credits scene, a far-future version of William — not necessarily a host — is being run through a loop of that fateful day over and over again, ending in him killing his own daughter time after time. Did William put himself in the loop in an effort to find a scenario in which he didn't commit this heinous act? Did somebody else put him in the loop to punish him? TBD.

In the Season 1 finale, Maeve made the choice to stay in Westworld and search for her daughter from a previous narrative; this was her first conscious action, as Ford's programming had ordered her to leave and infiltrate the mainland. In Season 2, Maeve teamed up with head writer Lee Sizemore, human technicians Felix and Sylvester, and host allies Hector and Armistice in her quest to locate her daughter.

Their quest took them on a detour to Shogun World, where Maeve, Hector, and Armistice were faced with their own counterparts. Maeve helped the geisha Akane secure vengeance for the death of her own surrogate daughter, Sakura — and along the way, her power to control other hosts grew. No longer needing to voice her commands, Maeve could now influence them with just a thought.

After returning to Westworld, Maeve was briefly reunited with her daughter, although she was quickly captured after trying to kill William. The code inside her that allowed her to control other hosts was copied and placed inside of Clementine, with the command to force all other hosts nearby to kill each other. As Maeve raced to save her daughter, Lee, Hector, and Armistice all died defending her; she held off the horde long enough for her daughter to make her way into the Sublime (a digital Eden for hosts) before falling to Delos' forces. Fortunately, Felix and Sylvester were still nearby to hopefully patch Maeve up and help her finally escape the confines of the park.

While William searched for the Door and Maeve searched for her daughter, Delos board director Charlotte Hale was just concerned with regaining control of the park and its murderous robots. She still needed to find Dolores' glitching father, Peter Abernathy — who went missing in the Season 1 finale — because she had implanted data vital to the future of the company in his head in an effort to smuggle it out of the park and away from Ford's control.

Although she briefly got her hands on Abernathy, she once again lost the elusive data after Dolores attacked the Mesa and took it, planning to use the information against her human enemies. Charlotte reprogrammed Clementine to turn the hosts against each other and succeeded in killing most of them, but her victory was short-lived: she was gunned down by a host version of herself, impersonated by this uncanny imposter in order to gain access to the Forge, and then had her likeness used so that hosts could escape the park. Which host is currently residing inside her body, we don't yet know.

Most of Season 2 was framed through the fractured perception of a disoriented Bernard, as he flashed back and forth between the events directly after Dolores' attack on the Delos gala and events two weeks later. In the former timeline, he discovered programmer Elsie Hughes (presumed dead after he attacked her on Ford's orders in Season 1) alive in a cave, outside the entrance to a secret lab. Exploring it together, they found the remains of a secret project that sought to implant a programmed human consciousness into a cloned body in an attempt to gain a sort of immortality. The experiment was attempted on Logan's father, Jim Delos, to disastrous results.

Burning that project down, Bernard and Elsie then ventured to the Cradle, which is where the park keeps all of the hosts' minds backed up, to be rebooted after they're murdered by guests. After uploading his mind into the Cradle, Bernard discovered the consciousness of Robert Ford himself, which Ford had previously ordered Bernard to print and implant inside the system. Ford's consciousness piggybacked into Bernard's mind and instructed him to head to the Forge — which is essentially the Cradle, but for human minds rather than hosts.

At the Forge, Bernard encountered Dolores, who was determined to use the Forge to learn as much as she could about humans… and then destroy it. Uploading themselves into the Forge together, Bernard and Dolores found a system made to look like a library, run by Logan Delos. After reading a number of strategically chosen books, Dolores exited the system and prepared to destroy it. But the Forge was also home to the Sublime, which many of the hosts were in the midst of uploading themselves into. Deleting the Forge would also delete the Sublime and all the hosts inside it. To prevent her from doing that, Bernard killed Dolores.

After returning to the Mesa, Bernard witnessed Charlotte kill Elsie, and his last shred of faith in humanity was broken. So Bernard built a copy of Charlotte and placed Dolores' mind inside it — then scrambled his own memories so he wouldn't remember this deception and give himself away. Bernard realized that Ford's thoughts inside his head were really his own and, having finally achieved true consciousness, he laid down on the beach and waited to be found by Delos forces.

After slaughtering most of the Delos board at the gala, Dolores began her quest to find the Valley Beyond, which she said contained a weapon she could wield against humanity. In reality, the Valley Beyond was the Forge, which a young William had shown her during its construction, and later came to regard as his greatest mistake. Along the way, she reprogrammed Teddy to be more ruthless, attacked the Mesa to secure the Forge's decryption key from her father's head, and ordered her acolyte Angela to suicide bomb the Cradle, destroying all the hosts' backups and freeing them from the shackles of immortality. Unfortunately, the newly cruel Teddy found he couldn't live with himself, and died by suicide in front of Dolores' horrified eyes.

After being killed by Bernard at the Forge and subsequently resurrected inside Charlotte's body, Dolores suddenly changed her mind about the Sublime. Returning to the Forge, faux-Charlotte revealed herself to the Delos team and killed them all. Then she uploaded Teddy's consciousness into the virtual Eden and beamed it — and all the hosts inside it — to a secret location where they could live unbothered by humans. Only then did she destroy the Forge and all of Delos' data inside it once and for all… and shot Bernard.

Still inside Charlotte's body, Dolores exited the park with five host consciousnesses (or "pearls") inside her purse. Although she was temporarily stopped by security officer Ashley Stubbs, he revealed himself as a host to her and let her pass. In the real world, Dolores reprinted her old body and put her mind back inside it, although the copy of Charlotte (with an unknown consciousness inside it) is still walking around. Then she reprinted Bernard, knowing full well that he would likely try to stop her from destroying humanity, hoping that the struggle between them would ultimately result in securing the future of their kind — in a very Professor X vs. Magneto kind of way.

What's going on with William in the future? How will Maeve escape the park? Who's inside Charlotte's body? What will Bernard do now that he's fully conscious? What is Dolores' next move… and whose minds are in the other pearls she smuggled out of the park? Find out the answers to these questions — and find yourself asking a million more, probably — when Westworld Season 3 premieres on Sunday, March 15.