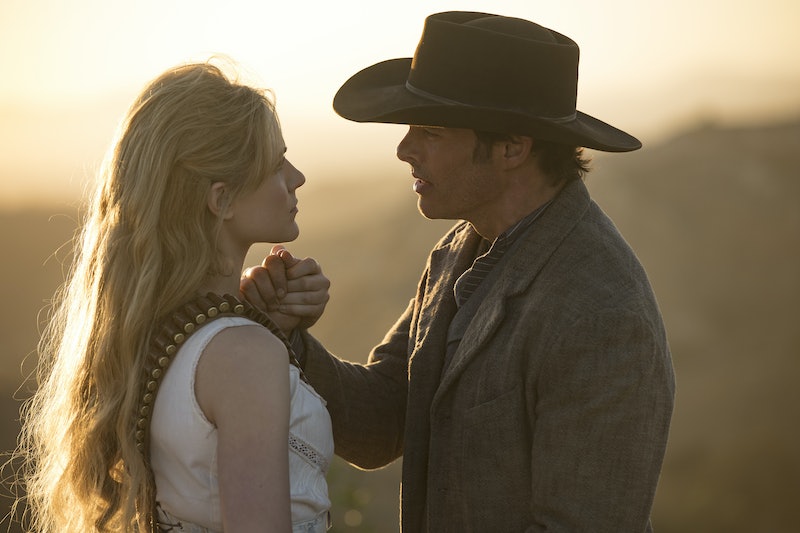 "Dreams don't mean anything." It's one of the first things Bernard tells Dolores in the official Westworld Season 2 trailer, noting that she doesn't seem satisfied by that response. Why would she? After all, last season ended with Dolores starting a violent uprising that could free her and the other hosts. But, this idea that dreams are meaningless might hint at the chaos to come this season, which returns on April 22.

From the looks of the new trailer, there is a lot to be done and only 10 episodes to do it. Dolores (played by Evan Rachel Wood) is on a journey to find the truth, asking those who come to Westworld if they understand the effects of their actions. Telling them that they will pay: "The reckoning is here."

The stakes have never been higher, and it's clear from the body count that is being left behind. The hosts are not playing around and the Man in Black is the only one who seems to understand that. In a voiceover, Ed Harris, who plays the Man in Black, is heard saying, "Up until this point the stakes were never real. But now, you and the rest of your kind are free."

But, what does freedom look like? That seems to be the question Season 2 will answer as it checks in with Maeve (Thandie Newton), who's gained consciousness and with it, the need to save someone from her past.

Already, it's been confirmed by Westworld's showrunners Jonathan Nolan and Lisa Joy that Maeve is making choices of her own free will. And her first decision was to return to Westworld after her big escape to save her daughter from this automated world. In this trailer, Maeve lays out her journey, telling someone who works for Delos Incorporated: "You're going to take me to my daughter."

For those wondering if William (Jimmi Simpson), who it was revealed is the Man in Black will be back, a quick shot of him looming over Dolores in the real world, proves his journey from hero to villain will be told. But, this season is about a revolution being led by the hosts. As Dolores tells Bernard (Jeffrey Wright), "Here we are, kind that will never know death. And yet, we're fighting to live."

This fight isn't going to be easy, it's clear from this trailer and the Westworld Super Bowl ad that the rebellion will take a toll on everyone involved. Earlier this month, Entertainment Weekly reported that Season 2 of Westworld will be more violent and it should give everyone pause. “The leashes are off,” Joy told EW. “The hosts are now literally able to define themselves. But the question is: How far are you willing to go until you become a reflection of the evil you’re trying to fight?”

That's unclear from the trailer, but it's clear everyone will be venturing further this season. The world is so much larger in scope now with the creators adding two new worlds including Shogun World, which fans got a glimpse of in the Season 1 finale. “The scale of Season 2 is just nuts, literally right out of the gate,” Wright told EW. “It’s so much more expansive, it makes the first season look like a genteel kitchen drama.”

Of course, there's nothing genteel about this new trailer, which shows soldiers storming the gate, bombs going off, and others shooting machine guns while riding in an off-roading vehicles. This world is a war zone. But, as Dolores said, "There is something beautiful in what we are."

And this season is looking to discover exactly what that is. Are they human or something else entirely? And what does it mean to be human and does it go hand-in-hand with violence? If a less-than-three-minute trailer leads to all those questions, it'll be interesting to see what else will be worth asking once the season's over.