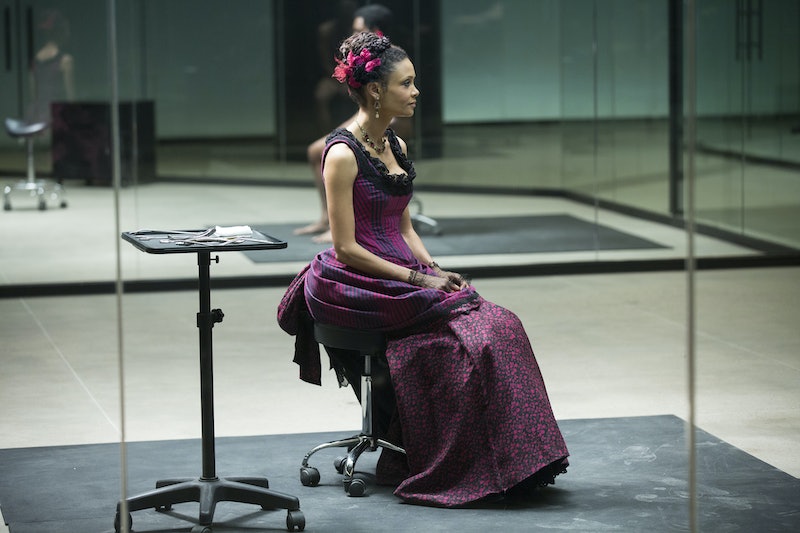 While you have been rooting for Maeve as she became more and more aware of her circumstances, the depressing truth of the matter is that Maeve was programmed to escape on Westworld. Considering the ending of the Season 1 finale, "The Bicameral Mind," with Ford having the hosts kill the real humans in the Old Town, it most likely was Ford who had reprogrammed Maeve. Ater all, he didn't seem surprised to see Bernard resurrected (which Maeve was responsible for) and her escape with fellow hosts Armistice and Hector distracted security from realizing that the hosts in cold storage had escaped. Yet, Maeve made one more move in the Westworld Season 1 finale that might prove that she truly is in control of her own destiny.

Bernard told her that she had been altered to want to escape, recruit other hosts, and make her way to the train. He even started to say what she would do when she reached the mainland. Maeve cut off Bernard though because she stubbornly refused to believe that it wasn't her free will that was compelling her. She claimed, "These are my decisions, no one elses," but on the computer you could see the steps of "Recruit," "Escape," "Manipulate," and even "Mainland Infiltration" had been programmed for her.

However, as she was headed to board the train to leave, Felix handed her a note that told her the location of her daughter — Park 1 Sector 15 Zone 3 — from her homestead narrative. That didn't deter her from her escape plan because she had come to realize that her daughter was never really her child. But as she was sitting on the train about to depart for that Mainland Infiltration step, she saw a mother and daughter interacting. She still had the note from Felix and impulsively decided to get off the train and presumably head back to Park 1 to find her daughter.

Although she couldn't hear Ford's speech in the park as she sat on the train, his voiceover was particularly poignant and proved that Maeve was making a conscious decision to go after her daughter. Ford said about his new story, "It begins with the birth of a new people and the choices they will have to make. And the people they will decide to become." As he talked about the decisions the hosts will make, Maeve got off the train, indicating she was not going to squander her self-awareness on a narrative that had been written for her. Because even if Maeve understands her daughter is a robot created just like her, she also has genuine emotions for her. So even if you were upset that Maeve's master plan hadn't been of her own mind, at least at the end of Season 1, she reached the center of the maze again — having full ownership of her life and the decisions she makes.

More like this
The Time Traveler’s Wife Book Has A Heartbreaking Ending
By K.W. Colyard
'Bridgerton' Season 3 Includes A Major Cast Shake-Up
By Grace Wehniainen
The 'Conversations With Friends' Book Ending Will Leave You Wanting More
By Sophie McEvoy
'The Essex Serpent' Book Ending Is Quite Complicated
By Rachel Mantock
Get Even More From Bustle — Sign Up For The Newsletter