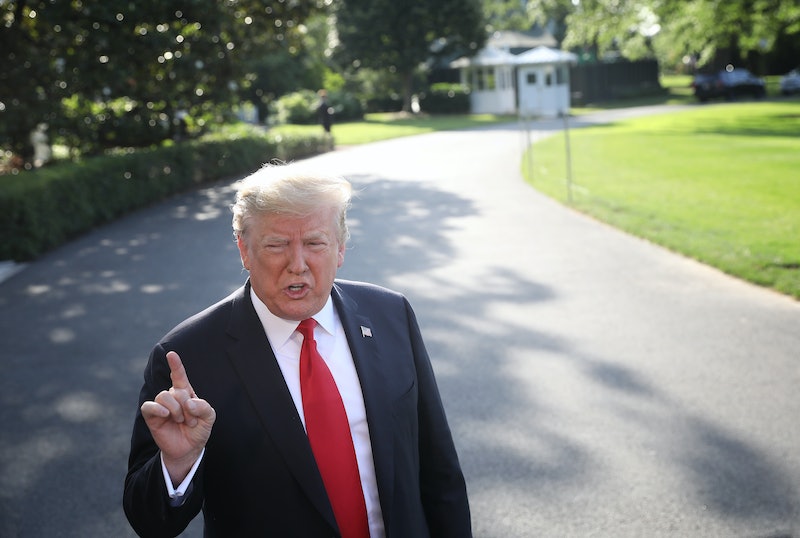 On the night of April 19, 1989, the lives of Antron McCray, Kevin Richardson, Yusef Salaam, Raymond Santana, and Korey Wise were changed forever. Accused of brutally assaulting Central Park jogger Trisha Meili, the five teen boys, dubbed the Central Park Five, endured anywhere from 10 to 24 hours of nonstop interrogation by the police. The Central Park Five ended up giving false admissions of guilt, which lead to them all serving time, between 5 to 15 years. But long before the boys even went to trial, and even before Meili recovered from her coma, one man took it upon himself to sway public opinion: then-real-estate mogul Donald Trump, who bought out full page ads in several prominent newspapers to implicitly call for the boy's deaths. The Central Park Five death penalty ads are real. Trump reportedly paid $85,000 for them, and they helped to further polarize a city already struggling with racism and an economic divide.

Trump, who has been accused by 23 women of alleged sexual misconduct and is currently under investigation for allegedly colluding with Russia during the 2016 election, wrote in the 1989 ads that, “I want to hate these muggers and murderers. They should be forced to suffer and, when they kill, they should be executed for their crimes. They must serve as examples so that others will think long and hard before committing a crime or an act of violence.”

He lamented that the crime in New York City was out of control, and good people lived in fear because of "roving bands of wild criminals" that police felt helpless to stop, or else they'd be accused of brutality. While he didn't name the boys, it's clear he was referring to them when he wrote that "criminals of every age" beat and raped a helpless woman, and then they "laugh at her family's anguish." He concluded that "I am not looking to psychoanalyze or understand them, I am looking to punish them … I no longer want to understand their anger. I want them to understand our anger. I want them to be afraid."

In a 1989 CNN interview about the ads, Trump told Larry King that "maybe hate is what we need if we're gonna get something done." This statement, along with the ad itself, disturbingly echoes the inflammatory rhetoric that Trump later employed in 2016 to get elected, and that he continues to use today as president.

No actor will play Trump in Ava DuVerNay's limited series When They See Us, but the real life ads and interviews will be featured across the four episodes.

It's undeniable that Trump's ads, published before even the trials had been set, ratcheted up the malicious sentiment surrounding the case, which quickly became racist and lynch mob-like. Republican White House aide Pat Buchanan wrote that Korey Wise, the eldest, should be "tried, convicted and hanged in Central Park" while the other boys should be “stripped, horsewhipped and sent to prison.” Two days after the ads ran, a white woman on a daytime TV show called for the boys to be castrated, and repeated the calls for the death penalty if Meili died.

Oliver Laughland at The Guardian reports that the Central Park Five's lawyer, Michael Warren, firmly believes Trump's ads played a huge role in the Five's convictions. "He poisoned the minds of many people who lived in New York,” said Warren. “Notwithstanding the jurors’ assertions that they could be fair and impartial, some of them ... had to be affected by the inflammatory rhetoric in the ads.”

Yusef Salaam agrees, saying in a 2016 The Guardian video that "Common citizens were being swayed and manipulated into believing we were guilty ... So Donald Trump, he was the firestarter I would say." Salaam told Laughland that the death threats to his family increased after the ads.

Trump whipped up public sentiment, but in 2002 it was finally revealed with the boys knew all along: they weren't guilty. Serial rapist and convicted murder Matias Reyes confessed he was the only one who assaulted Meili; DNA evidence backed him up. Years after they had already served out their terms, the Central Park Five were exonerated. They were later awarded a $40 million settlement in a civil rights lawsuit in 2014.

Even though though the convictions were vacated in the court of law, Trump has never admitted he was wrong. He reaffirmed his stance in 2013 after The Central Park Five documentary debuted. In a 2014 Daily News op-ed, he called the settlement a "disgrace" and "the heist of the century." He wrote that settling didn't equate to innocence, and "these young men do not exactly have the pasts of angels."

In 2016 he doubled down further, telling CNN that “they admitted they were guilty. The police doing the original investigation say they were guilty," ignoring that many now understand that the boys were coerced by the police. "The fact that that case was settled with so much evidence against them is outrageous.”

In speaking to The Guardian in 2016, Salaam sounded all too prescient about where the country was headed. "To see that he has not changed his position of being a hateful person ... To see that he's still the same person and in many ways he's perfected his sense of being that number one inciter. What would this country look like with Donald Trump being the president? That's a scary thing."