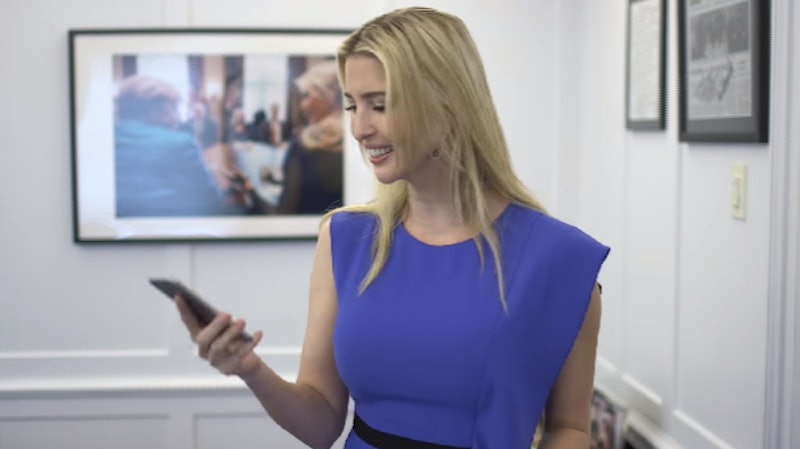 The White House/YouTube
By Chris Tognotti
May 18, 2018

On Thursday, just one day after social media became obsessed with the great Yanny vs. Laurel debate, the Trump administration decided to try to get in on the fun. And as you may already have learned if you've checked Twitter lately, the White House's Yanny/Laurel video is a sight to behold.

For the unfamiliar, the origin of this whole thing is a viral audio clip that started circulating on Twitter on Wednesday. It's basically the auditory version of "The Dress" ― you know the one. Some people, depending on the device they listened to the clip on, or their ability to hear higher frequencies, heard the voice say either "Laurel" or "Yanny." If you want to listen for yourself to see what you hear, you can check out the original clip here.

Seeing the reaction the clip got on social media, the White House clearly decided to get in on the act, posting a video showing administration figures like Ivanka Trump, Kellyanne Conway, Sarah Huckabee Sanders, Larry Kudlow, Mike Pence, and even President Donald Trump himself weighing in. Suffice to say, whether you're a fan of the Trump administration or not, the video is quite an unexpected take on the viral meme.

The video shows the collection of Trump administration officials revealing whether they heard Yanny or Laurel, complete with some jokes about the White House’s hostility toward the press. And it caps off with a punchline from Trump rehashing one of his own viral gaffes.

It starts off with Ivanka Trump, first daughter and an official presidential adviser, grinning and laughing as she says the voice is clearly saying “Laurel.” Deputy Press Secretary Raj Shah agrees, proclaiming that it is ”definitely Laurel.” Next, it is presidential counselor Kellyanne Conway’s turn in the spotlight.

“It’s Laurel ― but I could deflect and divert to Yanny if you need me to,” she says with a smile. This is clearly a joke about Conway’s habit of making evasive and diversionary statements to the press, as well as some outright false ones. The most prominent example is probably her multiple references to the made-up “Bowling Green massacre.”

Sanders, the White House press secretary, is the next prominent face in the video; she remarked that reports that she hears the word “Yanny” are “fake news.”

“Clearly you’re getting your information from CNN, 'cause that’s fake news,” Sanders deadpanned. “All I hear is Yanny.” Yet economic adviser Larry Kudlow, the next instantly recognizable face in the video, apparently disagrees.

“Ah, man, that’s Laurel,” he says. This leads into the big finale for the video, the vice president and president. Pence, for his part, has a similar reaction to many of his White House colleagues.

“Who is Yanny?” the vice president says. At that point, all that is left is the big Donald Trump reveal, and if you’re familiar with the recent history of presidential tweets, you’ve definitely heard this one before.

“I hear covfefe,” the president says. That's a reference to one of his most infamous tweets, in which (for whatever reason) he seemed to abruptly stop typing after apparently botching the spelling of the word "coverage."

The tweet, which was sent on May 31 of last year, remained up on Trump's account overnight, bewildering and startling people throughout social media. Now, it's the punchline in a video about an entirely separate social media phenomenon, the great Yanny vs. Laurel debate.

Basically, if you're on Twitter and you haven't seen the video yet, that's a little surprising. As of Thursday night, it's already been retweeted more than 15,000 times, in addition to netting more than 42,000 likes.