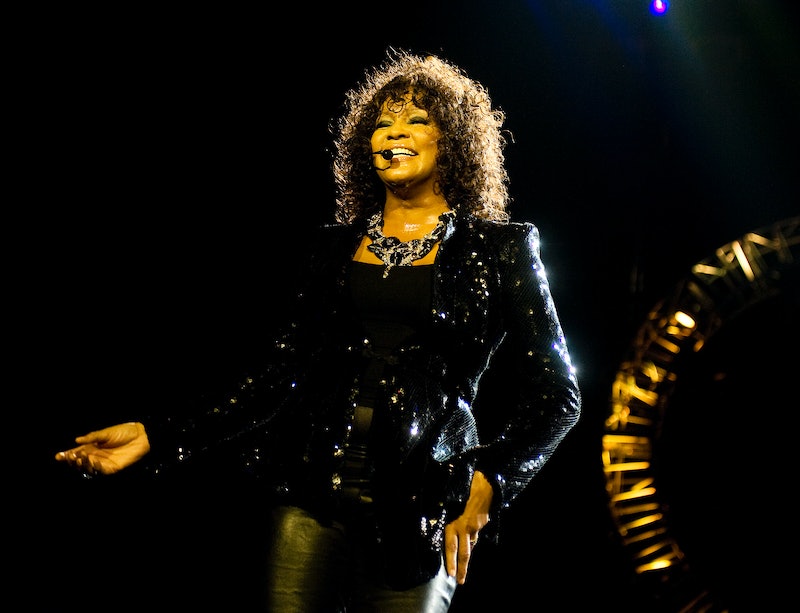 Whitney Houston had an iconic career that paved the way for women in pop, especially those of color. But for much of her life up until her death in 2012, her importance was overshadowed by the tabloids’ obsession with her drug addiction and family scandals. Yet with the new documentary Whitney, the first one approved by Houston's estate, her family is saying that it’s time to finally put the rumors to rest and focus on the icon's incredible legacy.

“I think that trying to make a serious psychological film about her and to try and understand her will mean that people will stop speculating and stop gossiping and say, ‘OK, that’s the definitive portrait of her, now we can turn to the music,'" says director Kevin Macdonald, speaking recently at New York's Whitby Hotel.

Prior to this doc, in theaters July 6, there have been many attempts to tell Houston’s story. The 2015 Lifetime biopic Whitney was denounced by Pat Houston, Houston's sister-in-law and executor of the Whitney Houston estate, who claimed that the film was made against the family’s wishes. And in 2017, there was another documentary, Whitney: Can I Be Me?, which premiered at the Tribeca Film Festival but also received plenty of criticism from Houston's family. So after years of watching others try to bring the singer's life to the screen, Pat decided to team up with Macdonald to share Houston's story herself. Explains the Whitney executive producer, "[There are] a lot of people out there doing documentaries and television shows about her life, so it’s time to put all this to rest so that we can really celebrate her true legacy, which is music."

Before starting to make the documentary, Macdonald and Pat had an extensive discussion about what the film would have to do to remain truthful to Houston’s story, and they agreed it needed to involve interviews with the singer's close family and friends. Having Macdonald, a relative outsider in Houston's world, be the one setting up the talks was an asset, as the director achieved a close level of trust with the Houston family. The singer's brother Gary, who is Pat’s husband, felt comfortable enough to share one of the family’s most harrowing secrets: Gary and Whitney’s alleged experience with sexual abuse at the hands of cousin Dee Dee Warwick, who died in 2008.

Even before interviewing Gary, Macdonald had suspected Houston had experienced childhood sexual abuse after uncovering an interview where she said that the thing that makes her angriest is child abuse. But Gary's heartbreaking claims in the documentary were not expected. “As a matter of fact, I wasn’t asking him about abuse. He surprised me. He said it out of the blue,” says Macdonald now. “He said what is in the film — you know, ‘My addiction is driven by memories I have of being abused as a child by a female relative.’ And I was shocked.”

After hearing Gary's claims, Macdonald spoke with Pat and Houston’s assistant Mary Jones to see if the singer had also allegedly experienced abuse, and they claimed that she had. Pat is adamant, though, that Houston’s experiences with childhood sexual abuse shouldn’t be correlated to her later drug addiction. “In hearing something like that and knowing that she had an addiction problem, everybody — a lot of therapists and some people — would say something traumatic must have happened," says Pat. "I don’t believe that."

Elsewhere in the documentary, Macdonald delves into Houston’s bond with rumored partner Robyn Crawford. In his 2016 memoir Every Little Step, Bobby Brown claimed that he knew Houston was bisexual and had been romantically involved with Crawford, but the new documentary depicts conflicting accounts of the duo's relationship. Gary expresses disdain towards Crawford, while others consider her to have been one of Houston’s few true friends and healthy partners throughout the star's life. Yet the doc also reveals the sad way Houston and Crawford’s friendship reportedly ended — thanks to an ultimatum reportedly given by Crawford after Houston chose to be with Brown despite his admitted mistreatment of her.

All throughout the film, Houston's family share their reactions to the many different stories and rumors about the singer, and it's clear that spending decades having to defend her name in the tabloids hasn't been easy on any of them. And it's still not over; recently, Kanye West and Pusha T decided to use the picture of the bathroom where Houston died as Pusha’s cover art for Daytona, much to the Houston family's stated disappointment. But as Pat says now, they'd prefer to focus on highlighting the singer's legacy instead of her scandals — even if it means revisiting them in this doc.

“You can’t change what other people do. You can change how you deal with it and I choose not to deal with it. I’ve had to live that and relive it, and it’s a picture that’s been out there before,” says Pat of the bathroom photo's usage. “All of that stuff is really minute to me. It’s very insignificant and I pay attention to what was, and she was such an incredible performer, and that’s what I stick with.”

Even though the documentary celebrates Houston’s accomplishments, there's no denying that it also tells a heartbreaking tale of abuse, addiction, and a family coping with tragedy. But Pat, for one, hopes it’ll become a cautionary tale. “She has a human story just like we do and her life mirrors all of ours," the producer says of her sister-in-law. "She just had to play hers out in public, and we live our darkness in the shadow... she’s narrating and telling you the things that bothered her in life, which I’m pretty sure was a lot of silent suffering. People who go through silent suffering all the time, that’s why there are suicides. That’s why there are certain things that happen."

With the new film, the Houston family hopes that a bigger conversation can come from it that expands beyond the superstar's story, helping others who are going through similar struggles that Houston faced during her too-short life.