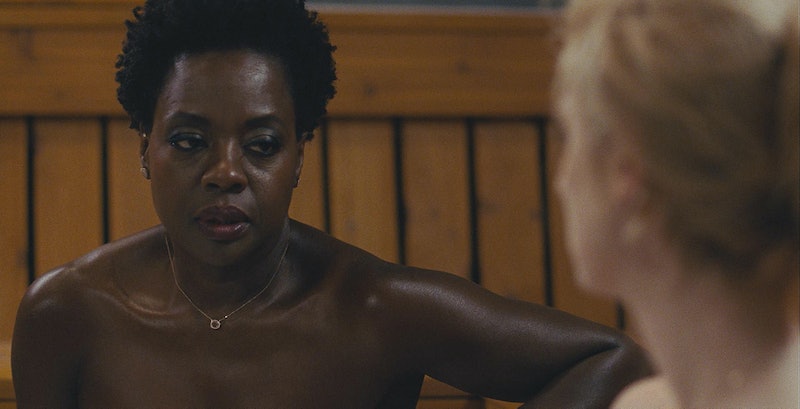 Whenever any awards show announces its nominations, there's bound to be some controversy. But some snubs hurt more than others. Moviegoers took note that Widows didn't get any Golden Globes nominations when the nods were announed this Thursday morning. For a movie that's been basking in the glory of rave reviews from critics — it has a score of 91 percent on Rotten Tomatoes — the lack of recognition for the heist drama feels like a downright criminal offense.

The only acceptable excuse for Widows not receiving any Golden Globes nominations would be that it came out too late, but it arrived in theaters on Nov. 16, well within the consideration period. So what gives? The movie, expertly written by director Steve McQueen and Gone Girl author Gillian Flynn, takes its audiences on a wild ride as an unlikely team of four women collaborate for a big-time heist that's filled with shocking twists and turns.

The movie has all the makings of an awards season knockout, especially since so many people involved in it have previously basked in Hollywood's spotlight. The movie was directed by Steve McQueen, of 12 Years a Slave fame, and it stars Viola Davis, Michelle Rodriguez, Elizabeth Debicki, and Cynthia Erivo as the would-be criminals. Beyond that, Widows also features Liam Neeson, Colin Farrell, Brian Tyree Henry, and Daniel Kaluuya.

With such a stacked cast and acclaimed team of writers behind Widows, it's hard to imagine how the movie didn't get at least one nomination for the Golden Globes. Viola Davis, who plays Veronica, has previously earned five Golden Globes nominations for her roles in Doubt, The Help, How to Get Away with Murder, and Fences, winning Best Performance by an Actress in a Supporting Role for Fences in 2017. Considering how much the industry loves her, it's pretty shocking that Davis didn't score her sixth Golden Globes nomination for her leading Widows performance.

Widows, a remake of a British miniseries, is about a group of women who lose their criminal husbands when they die attempting an armed robbery. Left with the plans to her husband's next heist, Veronica (Davis) enlists a team of amateurs, played by Rodriguez, Debicki, and Erivo, to pull off the unfinished plans in order to pay a collector who's threatening them. Not only are the women dealing with their grief, but they also are put into positions that they'd never anticipated being in, especially Debicki's character, Alice, who'd spent her marriage as a victim of abuse and had learned to live in fear and uncertainty.

Out of all of the women, Alice has to overcome the most self-doubt, and most people who have seen Widows would probably agree that Debicki deserved a Golden Globes nomination for her supporting role in the film. In an interview with Vulture, Debicki explained that Widows is more than just a heist movie because it lets you see how the women in the film change under pressure. "They’re thrust into these circumstances where they have to grow," the actor said.

Widows is action-packed though, and McQueen's direction of those stunning chase scenes should have been rewarded as well. Unfortunately, the Hollywood Foreign Press Association overlooked all the talent at work in the film, from the screenplay to the performances. But there's always the Oscars...