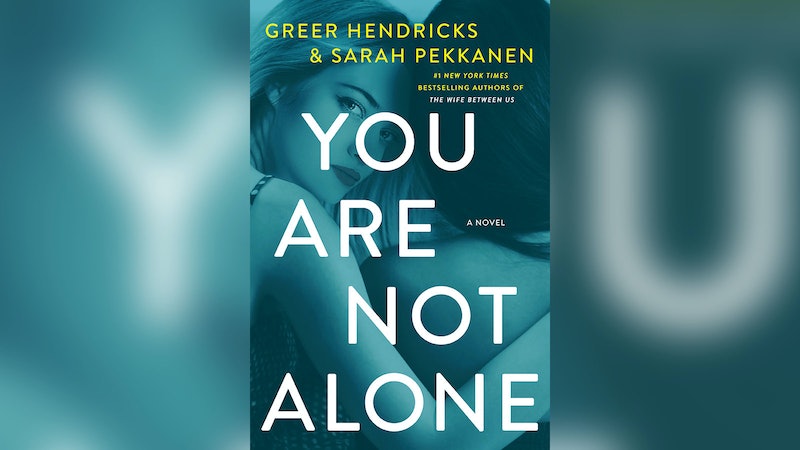 Fans of The Wife Between Us and An Anonymous Girl have a reason to celebrate today. Greer Hendricks and Sarah Pekkanen's new book, You Are Not Alone, is coming next year, and Bustle has an exclusive first look at the cover and a sneak peek at the first chapter below, so that you can hype yourself up for Hendricks and Pekkanen's new novel ahead of its release on March 3, 2020.

Warning: This article and excerpt contains information about suicide, which some may find triggering.

Shay Miller is living an ordinary, if disappointing, life. She's recently out of a job, and her roommate — whom she had hoped would become her boyfriend — has moved his new girlfriend into their apartment. Shay has spent the last month as an unemployed singleton, and she's kind of over it.

Everything changes when, after missing her train one Sunday morning, Shay witnesses the suicide of a woman who bears a striking resemblance to herself. Shaken up by the other woman's actions, and afraid that her own life may take the same kind of turn, Shay falls in with Cassandra and Jane Moore — two sisters who embody everything she wants out of life. But friendship with the Moore sisters comes at a price, and Shay may not learn what their terms are until it is too late.

Greer Hendricks and Sarah Pekkanen's You Are Not Alone comes out on March 3, 2020, and is available for pre-order now. Check out the cover below, and keep scrolling to read an exclusive excerpt from the novel's opening chapter.

'You Are Not Alone' by Greer Hendricks & Sarah Pekkanen
Amazon

Numbers never lie. Statistics, charts, percentages — they don’t contain hidden agendas or shades of gray. They’re pure and true. It isn’t until people start meddling with them, spinning and shaping them, that they become dishonest.

There are two wineglasses on the coffee table, evidence of a romantic night. I clear them away, rinsing the ruby-colored stains pooling at the bottom of the goblets. The coffee is brewing, filling the galley kitchen with the aroma of the dark-roast beans Sean introduced me to when I moved into his Murray Hill apartment eighteen months ago.

I turn my head at the sound of a key in the lock, and a moment later he comes in, stepping out of his flip-flops. He’s humming, like he does when he’s happy. He’s been humming a lot lately.

“Hi there,” I say as he sets down a shopping bag from Whole Foods with a bouquet of yellow tulips peeking out the top. “You’re up early.”

He’s humming, like he does when he’s happy. He’s been humming a lot lately.

His thick, gingery hair is sticking up a bit in the back, and I suppress the urge to reach out and run my fingers through it.

As I reach for the carafe of coffee, Sean’s bedroom door opens.

He quickly gathers the tulips as his girlfriend, Jody, walks into the kitchen.

“Good morning,” she says, stretching. She’s wearing a pair of Sean’s boxers, which are almost covered by one of his big hoodies. Her curly hair is up in a high ponytail, and her toenails are painted bright pink.

Sean gives her the tulips — and a kiss. I quickly turn away, busying myself opening the fridge and pouring almond milk into my travel mug.

“Enjoy breakfast,” I say. “I’m heading out to get some work done.”

“On a Sunday?” Jody crinkles her pert little nose.

“I want to revise my resume,” I explain. “I have an interview tomorrow.”

I grab my tote bag containing my laptop off the bench by the front door. Beneath the bench, Jody’s sandals are nestled next to the flip-flops Sean just removed. I use my toe to nudge apart their shoes.

Then I descend two flights of stairs and step outside into an already-muggy August morning.

It isn’t until I’m at the corner that I realize I left my travel mug on the kitchen counter. I decide to treat myself to an iced latte instead of going back to the apartment. These days, I spend as little time there as possible.

Because numbers never lie. And two plus one equals... too many.

I pull open the heavy glass door to Starbucks, noticing it’s packed. Not surprising: Sixty-four percent of Americans drink coffee every day, with slightly more women than men consuming it regularly. And New York is the fourth most coffee-crazed city in the country.

I can’t help myself: I often see the world through stats. It’s not just because as a market researcher I analyze data to help companies make decisions about the products they sell. I’ve been this way since I was a kid. I even have a collection of data books I started filling at eleven years old, the way others might keep diaries. I began by tracking my allowance; the numbers were small, but it was fun to see them increase. Other numbers I collected weren’t as enjoyable: After I grew three inches and gained twelve pounds the summer before middle school, making me the biggest of all the girls and boys in my class, I began charting my height and weight and the minutes I spent exercising every day.

My latest data book, a slim leather-bound notebook, is tucked in my tote bag now.

I glance around the coffee shop. A woman leans over her laptop, typing purposefully. A couple sits side by side, her leg casually draped over his, The New York Times splayed across their laps. A father and a young boy sporting matching Yankees caps wait at the counter for their order.

Lately it seems like the stats are against me: I’m thirty-one years old, and I’m not dating anyone. When my boss called me into his office last month, I thought I was getting promoted. Instead, he told me I was being downsized. It’s like I’m caught in a slow spiral.

I’m fighting as hard as I can to turn things around.

First, a job. Then I need to find a new place to live. After that, maybe I’ll join a dating site. There’s a void in my life Sean used to fill. Before he met Jody, we ordered in Chinese food at least once a week and binge-watched Netflix. He’s forever misplacing his keys; I instantly know from the way he calls “Shay?” when he needs help finding them. He waters the plant we named Fred, and I bring up the mail.

He’s the first guy I really liked since I ended things with my college boyfriend. I began to fall for him months ago. I thought he felt the same.

When the barista sets my latte on the counter, I scoop it up and push my way out the door.

Even at a few minutes after nine a.m., the heat is thick and oppressive; it engulfs me as I head to the subway station on Thirty-third Street. When I feel my hair sticking to the back of my neck, I stop to dig an elastic band out of my bag so I can tie it up.

As I descend the stained, tile stairs into the tunnel, I hear the subway I just missed speeding away from the station. A few people who must’ve disembarked from it climb the steps opposite me. I reach the platform and feel the last of the train’s breeze in its wake. A fluorescent light above me flickers, and trash overflows from a garbage bin. There’s only one other person waiting, about ten yards away from me.

Why didn’t he catch the train that just left?

When someone conjures unease in you, there are usually good reasons behind it. A man with a goatee and backpack lingering on a deserted subway platform on a Sunday morning isn’t enough to make my pulse quicken.

But the way he’s looking at me is.

I watch him out of the corner of my eye, alert for any sudden movements, while my brain spins: The stairs are directly behind me. If he wants to harm me, I might be quick enough to run up them. But I could get stuck at the turnstile.

I can’t identify any other escape route.

The man takes a slow, deliberate step toward me.

I whip my head around, hoping someone else is coming.

That’s when I see we aren’t alone, after all. A woman stands farther down on the platform, in the opposite direction of the man. She’s partially camouflaged by the shadow of a large support beam.

I watch him out of the corner of my eye, alert for any sudden movements, while my brain spins...

I move closer to her, still keeping the guy in my peripheral vision. But all he does is continue walking toward the stairs, eventually disappearing up them. I chide myself for overreacting; he probably mistakenly entered the downtown platform instead of the uptown one, which is something I’ve done before. And odds are he was looking at the exit the whole time, not at me.

I exhale slowly, then glance up at the monitor. The next subway is due in two minutes. A few more people drift onto the platform.

I can hear the distant rumbling of the wheels of the inbound train — it’s a familiar soundtrack to my daily life. I feel safe.

The woman glances my way and I notice she she’s about my height and age. She has freckles scattered across her nose and cheeks, like me, but her hair is shorter and lighter than mine. Her face is pleasant; she’s the kind of person I’d ask for directions if I were lost.

I break eye contact with her and look down. Something is glinting against the dull concrete of the platform. It’s a piece of jewelry. At first I think it’s a bracelet, but when I bend down and scoop it up, I realize it’s a long gold necklace with a dangling charm that looks like a blazing sun.

I wonder if the woman dropped it. I’m about to ask her when the roar of the incoming train grows louder.

She steps close to the edge of the platform.

My mind screams a warning: Too close!

In that instant, I realize she isn’t there to ride the subway.

We lock eyes. The train appears in the mouth of the tunnel. Then she leaps.

For a split second she seems frozen, suspended in the air, her arms thrown overhead like a dancer.

Then the train shoots past, its wheels grinding frantically into the tracks, the high-pitched shriek louder than I’ve ever heard it.

My stomach heaves and I bend over and throw up. My body begins to shake uncontrollably, reacting to the horror before my mind can process it.

The train stops. I force myself to look. There is no sign of the woman at all.

One second she existed and the next, she’d been erased. I stagger over to a bench by the wall and collapse onto it.

During everything that follows — while I give my statement to a police detective with an impassive face, am escorted past the crime-scene tape up to the street, and walk the seven blocks home — I can’t stop seeing the woman’s eyes right before she jumped. It wasn’t despair or fear or determination I saw in them.