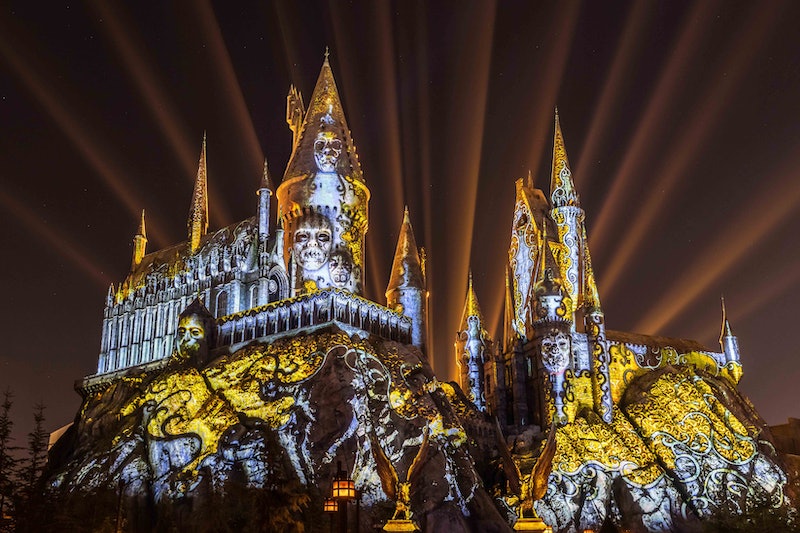 Death eaters, mountain trolls, and He-Who-Must-Not-Be-Named are headed to Hogwarts Castle. Universal Studios Hollywood's Wizarding World Of Harry Potter is premiering a brand new Dark Arts light show on Saturday, April 13. At a premiere event for the Dark Arts show in Los Angeles on April 11, it was clear that even though the show is all about the more frightening sides of the wizarding world, Harry Potter does make an appearance in an undeniably sweet way.

The eight-minute nighttime show is projected onto Hogwarts Castle, displaying thestrals, Aragog, Borgin and Burkes, Dementors, and Lord Voldemort himself taking over the famous school building in a dazzling display of lights, flames, and drones. Keep an eye out for Harry's Patronus, a silver stag, which brings some much-needed light into the darkness. The show also features an iconic quote from Dumbledore and an original score conducted by William Ross and recorded by the London Symphony Orchestra. The Dark Arts at Hogwarts Castle will run from April 13-28 and then from May 25-27 at Universal Studios Hollywood. The show will also premiere at the Orlando, Florida theme park at a date to be announced later. The times of the show will vary, but they will start at sundown and air at regular intervals until the park closes.

Universal Studios Hollywood Senior Director of Entertainment Production Stephen Siercks tells Bustle that the Dark Arts at Hogwarts Castle has been in development for over two years. Universal Studios' previous Hogwarts light shows include Nighttime Lights and the Magic of Christmas. And though the Dark Arts show is a bit darker and spookier than the others, Siercks says it can be enjoyed by Harry Potter fans of all ages.

"We were looking for a new story to tell and we found that the Dark Arts allowed us to find new characters, experiences, and stories that we knew that our guests would relate to," Siercks says. "We're really excited for both the fan who is connected into Harry Potter and also the fan who is just experiencing Wizarding World for the first time to experience and embrace the story that we're telling."

In addition, a brand new wand is available for purchase in conjunction with the premiere of the Dark Arts show this month. The 2019 Collector’s Edition Interactive Wand is currently available for purchase at the Universal Studios theme park. The limited-edition wand is not on-sale online, according to official Instagram account, and is only available while supplies last, so you may need to act fast.

The Wizarding World of Harry Potter has been a major attraction at Universal Studios Hollywood since 2016 and the Universal Orlando Resort since 2010. At Universal Studios Hollywood, Hogwarts Castle houses the ride Harry Potter and the Forbidden Journey, right across from the ride Flight of the Hippogriff. The Wizarding World also includes recreations of the Hogwarts Express and Hogsmeade Village, where fans can shop, grab a bite to eat at The Three Broomsticks, and of course, order up some Butterbeer in all of its forms.

And now, the new Dark Arts show is a new nighttime addition for Harry Potter fans to enjoy while visiting the theme parks.