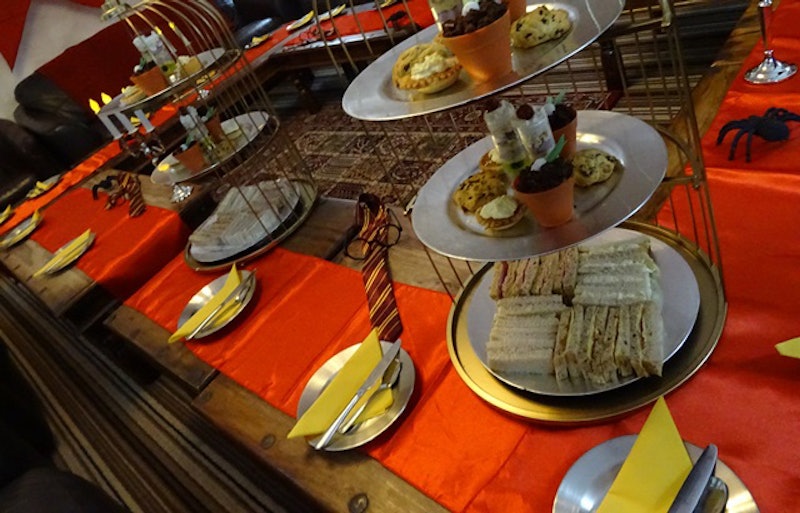 Harry Potter fans will go to great lengths to recreate their favorite moments from the beloved book series. But what about booking a ticket to a Wales? Uh, accio that wallet, because this UK bed and breakfast offers a hardcore afternoon Wizard's Tea that's the perfect fall activity for Harry Potter Fans.

While Harry Potter is undoubtedly popular throughout the United States, the country of Great Britain, home of author J.K. Rowling, has been pulling out all the stops in honor of the series' 20th birthday. In October, the British Library will be debuting a greatly anticipated new exhibition, "Harry Potter: A History of Magic," which seeks to illuminate the real-life inspirations behind Rowling's wizarding world. And earlier this year, the BBC announced they'll be airing a companion documentary to the exhibition, featuring behind-the-scenes footage of the run-up to opening day and interviews with Rowling and a host of celebrity fans. The doc is set to hit screens this fall.

Children and adults at Llety Cynin, located on a working dairy farm, are treated to specialized menus. For baby muggles, offerings include "Not Pumpkin Juice," a blend of carrot and orange juice, miniature versions of the infamous "Happee Birthdae Harry" birthday cake, chocolate frogs, sour lollipops ("It won't burn a hole in your tongue," promises the website) and house-specific shortbread. Hungry? Oh, we're only getting started.

Adults are treated to finger sandwiches, spiced pumpkin pasties, treacle tarts, Hagrid's "rock cakes," which are blessedly edible versions of currant cakes, "Screaming Baby Cakes," created from vanilla and chocolate cupcakes, brownie soil and a fondant "baby mandrake," and hot "beer" - hot milk, caramel and cinnamon and butterscotch syrup with cream and espresso (I never thought I'd be attracted to the idea of non-alcoholic beer but here we are).

While the tea isn't limited to overnight guests, every attendee is required to book a table ahead of time. Adults pay £15.95 and the children's rate is £10.95 per guest.

Llety Cynin is no stranger to a well-executed tea time theme - throughout 2016, they hosted a weekly Roald Dahl-themed tea time event. No word yet on what their 2018 theme will be, but, uh, I'll be saving my Galleons. Book now at Llety Cynin's website.