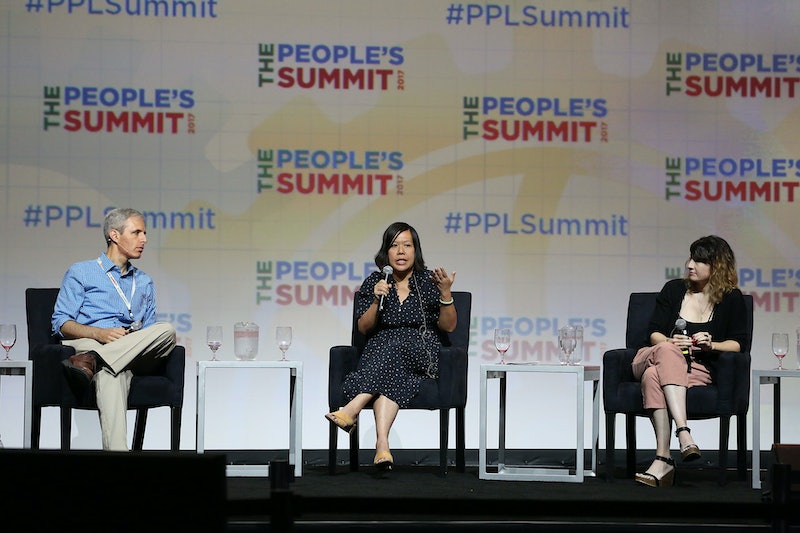 When Sen. Bernie Sanders spoke to crowds in Germany, England, Wales, and Ireland recently, one event sold out in 35 seconds, and another within two minutes, according to his wife, Jane. Coupled with the recent gains by "Bernie-esque" U.K. Labour leader Jeremy Corbyn in Thursday's snap elections, it's safe to say Europe is "feeling the Bern." That phrase — and with it, a healthy dose of the longtime Vermont politician’s popularity — is thanks to a woman named Winnie Wong.

Wong might not be a household name to the 13 million people who voted for Sanders throughout the Democratic Primary, but to the 4,000 activists at The People's Summit, she's an A-list celebrity.

Alongside the Women's March on Washington co-chairs Carmen Perez and Linda Sarsour, social activist and author Naomi Klein, former Ohio state Sen. Nina Turner, and National Nurses United head RoseAnn DeMoro, Wong is at the center of a movement that promises to reform the American political system by pushing corporate interests behind the needs of the working class.

Sound familiar? Panel discussions and hands-on trainings led by Wong and other activists teemed with themes from Sanders' campaign platform — music to the ears of attendees whose hopes had been dashed once by Sanders' failure to lock down the Democratic Party nomination, and again by Donald Trump's election to the nation's highest office.

"This is definitely a conference where women and powerful women activists are leading the way," Wong tells Bustle.

That's part of the movement's appeal to the younger generation, which flocked to Sanders in droves ahead of the 2016 election. In fact, Sanders gained more votes from people under age 30 than his Democratic rival Hillary Clinton and President Donald Trump combined. Wong is looking to harness that power and build support for the progressive agenda ahead of the next election.

"Understand that you have agency and understand that only you have the power to transform the political conditions in this country," Wong tells Bustle. "In 2020 when all of you will vote Donald Trump out of this administration, out of this government, there are more of you who will vote for someone to replace Trump than there are those who voted him in."

Wong estimates there are 90 million millennials who will be eligible to vote in the 2020 presidential election. While some of them see Sanders as the de facto Democratic nominee, the party has had a harder time coalescing around the famously independent senator and his democratic socialist platform. While it's clear Sanders' support is strong among the progressives at the conference, it's less clear who'll carry the torch in the years to come.

"I mean, he certainly carries the mantle of the political agenda," Wong says of Sanders. "I don't think that any of the convening groups here, or any of the people who really helped put together this conference, have [coalesced] around one candidate who they think might be the candidate, so it remains to be seen who that person will be, and that person really needs to earn our vote."

Wong, with her straight-talk and sincere enthusiasm for the progressive agenda, is a formidable force in the movement. Whether she'd "walk the talk" by running for office herself is up for discussion.

"It might happen," Wong says. "It might happen in 2020. I'm still young enough that I can take the time to organize the political revolution before I think of governing inside. So it's possible."

Wong says her skills may be better suited to strategizing and organizing rather than legislating, but she also says that might be her greatest strength as a candidate.

With a few years left until she'll need to make her decision, there's plenty of time to see whether Wong will test the waters, or whether launching other women into the pool of candidates will be enough.