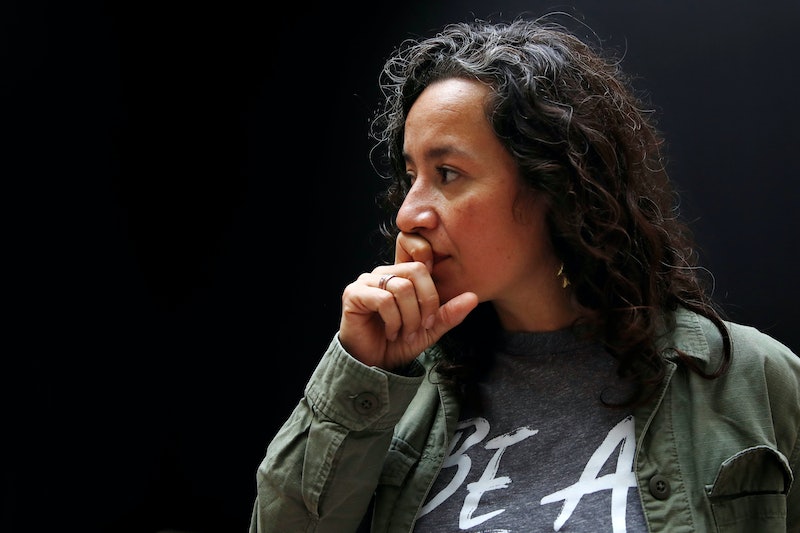 After a video of Maria Gallagher confronting a senator about her sexual assault went viral in 2018, she had trouble being in crowds, going to work, and even dating. In the year since her momentous exchange with former Sen. Jeff Flake in an elevator on Capitol Hill during the protests over Brett Kavanaugh's Supreme Court nomination, she’s experienced moments of withdrawal and isolation. That was the first time Gallagher had ever spoken about her sexual assault, and the video was played over and over by major news outlets across the country. She felt embarrassed at her office, worried that everyone now knew her most intimate secret. She was certain that all of her dates would look her up and fixate on this one detail of her past.

“Dating was kind of like I was just waiting for someone to say that they had Googled me,” Gallagher tells Bustle. “I didn't know who knew what and who I could talk to.”

Both Gallagher and a second survivor who confronted Flake outside the elevator, Ana Maria Archila, say they’ve come to realize over time how much of a positive impact their viral moment had — even if it didn’t stop the then-Supreme Court nominee from being confirmed as they’d hoped. In recent weeks, activists and politicians, including presidential candidates Sen. Elizabeth Warren and Sen. Kamala Harris, have called for Kavanaugh’s impeachment. The renewed scrutiny on the justice came after journalists from The New York Times reported that a 10-month investigation into Kavanaugh had uncovered more allegations about sexual misconduct, including an additional and previously unreported incident from Kavanaugh’s time at Yale. Kavanaugh has denied accusations of sexual misconduct.

The new reporting on Kavanaugh is the latest in a series of ups and downs for sexual assault survivors who protested his nomination. But the fact that Archila and Gallagher’s actions helped inspire a more open conversation around sexual violence is fueling their hope for the future. And as life-changing as the confrontation itself was, Archila says even the protests leading up to that encounter were transformative.

“By the time I showed up in the elevator, I had been transformed by the power of those stories and the incredible display of courage that I had witnessed,” she tells Bustle of how the protests against Kavanaugh influenced her decision to disclose her own sexual assault story for the first time in public.

"In the immediate aftermath, I was mostly really anxious all the time."

As a career community organizer and the co-executive director of the Center for Popular Democracy, Archila had a background in grassroots actions before she took to the streets to protest Kavanaugh’s confirmation. Gallagher, on the other hand, was a research analyst and recent college graduate who was just beginning to dip her toes in the world of political activism at the time. Gallagher and Archila met the day they confronted Flake in the elevator.

In the now-famous video, Archila exasperatedly tells Flake, “What you are doing is allowing someone who actually violated a woman to sit on the Supreme Court. This is not tolerable.”

“Look at me and tell me that it doesn’t matter what happened to me,” Gallagher says in the video, her voice cracking. “That you will let people like that go into the highest court of the land and tell everyone what they can do to their bodies.”

Both Gallagher and Archila say they’re proud of the ripple effect this encounter had in inspiring people across the United States to speak up about sexual violence, despite the emotional toll that the highly public exchange and the virality of the video had on them personally. Opening up about her assault on the national stage had painful side effects for Gallagher. “In the immediate aftermath, I was mostly really anxious all the time,” she says. Still, had it not been for the adrenaline rush of the confrontation with Flake, or for the emotional response she had watching Dr. Christine Blasey Ford’s testimony, Gallagher isn’t sure she would have ever opened up about her experience surviving sexual assault.

“I don't know if I would have said it out loud, or really confronted it, or told people if I didn't have that moment,” she says.

“The reason why he was dangerous was not just because he had sexually assaulted Dr. Ford, but because he was going to inflict pain and harm with his rulings to millions of people,” Archila says. "That is proving to be the case.”

Since taking his seat on the Supreme Court, Kavanaugh has been the tie-breaker in at least eight rulings that were divided along traditional partisan lines, according to Time. In Nielson v. Preap, he ruled in favor of continued indefinite detention for undocumented immigrants. In June's Medical Services v. Gee, he ruled that Louisiana could move forward with a law that would require doctors who provide abortions to have privileges at a hospital as well.

"People are tired, but people are also committed."

While policy decisions like these are viewed as major setbacks by activists like Gallagher and Archila, both women maintain that protests and other actions over the past year have also helped increase awareness and public discourse on issues like sexual violence. Rachel Carmona, the chief operating officer of the Women’s March, says that despite Kavanaugh’s confirmation, more people have shown up for protests and signed up to be trained in direct action planning and execution.

“As time went on, we realized that we had trained tens of thousands of new women,” Carmona says. “Even in times of struggle, our movement is growing and continuing to double down on its commitment to rejecting the politics of prejudice.”

Now, the organizers of the Women’s March, alongside several other organizations including Archila’s, are planning a rally under the banner #ReclaimTheCourt on the anniversary of Kavanaugh’s confirmation. “It’s been a long year. People are tired, but people are also committed,” Carmona says. “I think that our October 6 activity is a demonstration of that."

#ReclaimTheCourt is the first in a series of smaller actions and rallies that organizers like Carmona have planned for the fall and for the year leading up to the 2020 election. In addition to grassroots actions like these, Carmona believes that the impeachment inquiry against Trump has helped set the stage for the possibility of an inquiry against Kavanaugh. “There are tangible outcomes that can be a result of this action,” Carmona says, noting that one of the #ReclaimTheCourt’s demands is legal action against Kavanaugh, “including impeachment.”

Despite facing burnout and fatigue intermittently over the past year, Gallagher has also maintained hope. Thanks to actions like #ReclaimTheCourt, as well as the greater #MeToo movement, Gallagher believes people can make tangible progress toward ending sexual violence, even if policy change is slow to follow.

“I think it's really hard to feel like one person can do anything meaningful,” she says. “I've come to a place where I am trying to remind myself that doing anything I can is doing enough.”

More like this
How To Fight For Reproductive Rights, Based On How Much Time You Have
By Courtney Young
17 Powerful Photos From March For Our Lives Protests Across The U.S.
By Michelle Toglia
34 Quotes That'll Inspire You On Juneteenth & Beyond
By Syeda Khaula Saad and Siena Gagliano
The Families Of Grenfell Tower Are Still Waiting For Justice, Five Years On
By Bustle UK
Get Even More From Bustle — Sign Up For The Newsletter