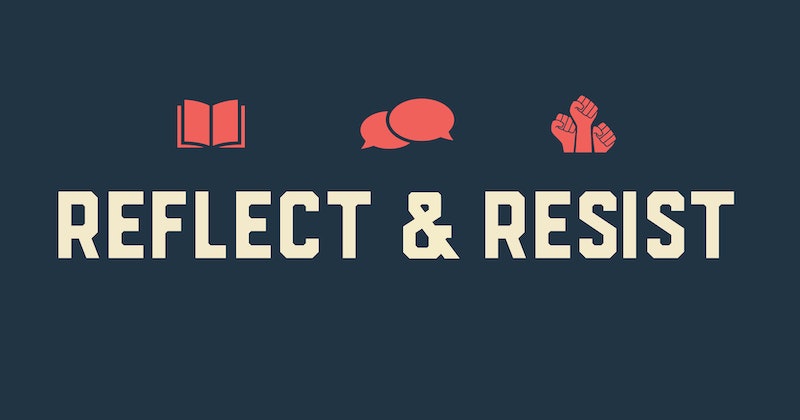 In the aftermath of the historic Women's March and its followup, A Day Without A Woman, the organizers of the Women's March have launched #ReflectAndResist, the fifth of their 10 actions out of 100 days. While their previous actions have taken protesters, educators, and speakers to the streets, this action is far more personal: it encourages participants to read books, watch films, and engage in media to expand their understanding of feminism, and how deeply rooted its integrity is in keeping it intersectional.

In this latest call to action, the organizers stress just how important it is to the movement to remain cognizant of issues affecting not just women at large, but the specific issues affecting women of color, women with disabilities, sex workers, low-income women, and the LGBTQIA+ community. So often their voices are dismissed or silenced not just in the world at large, but within the feminist movement itself. The organizers endeavor to bridge that gap and foster true intersectionality in the movement by elevating the voices of activists, authors, and filmmakers who can speak to and share the experiences and issues that people of those communities face, and demonstrate just how deeply rooted they are in feminism.

Here's how you can participate in #ReflectAndResist.

Engage With The Suggested Books, Movies, And Articles That The Organizers Have Shared

In each category — books, movies, and articles — the organizers have suggested five different options to get started on reflecting and resisting. While your reading and viewing should by no means be limited to this list, it is provided as a starting point to elevate the voices of activists, authors, and intersectional feminist role models from Janet Mock to bell hooks to Corbett Joan O'Toole, and to help broaden the perspectives of those who may be limited in their understanding of the feminist movement. For a full list of their recommendations, go to the Women's March website here.

Arrange a time for you and a group to view one of the films and discuss afterward, or set up a book club type set-up either in person or online. Change doesn't happen in a vacuum; opening up these issues and giving the women that they affect the floor to share their thoughts and their own experiences regarding them is imperative — and women of privilege need to not just hear them, but truly listen, to do meaningful work toward making the movement more intersectional.

A movement is only as strong as the voices behind it. Spread the word about the fifth action by sharing images and the #ReflectAndResist hashtag with followers on Facebook, Twitter, and Instagram, sharing the links to the suggested reading and contextualizing it for those who may not understand why it is such a vital part of the movement.