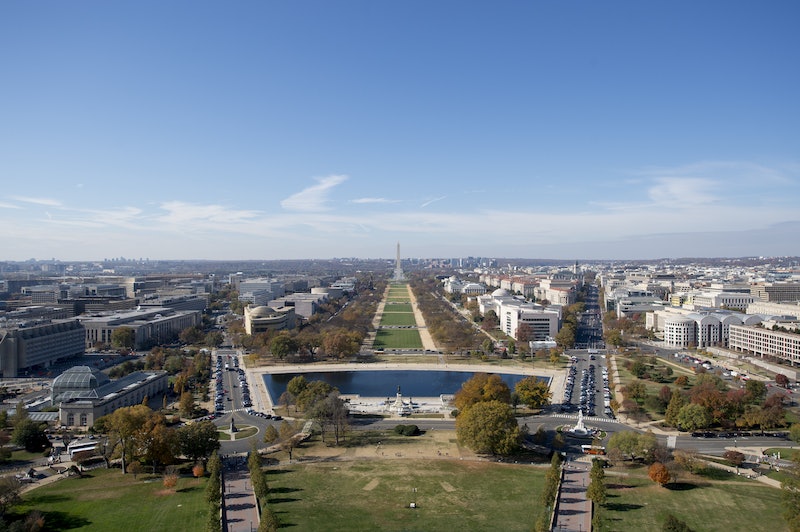 After winding its way through the bureaucratic red tape and finally securing the necessary permits, the Women's March on Washington locked down a starting point and the right to march on Jan. 21, the day after the inauguration. The march, which will start near the Capitol at 10 a.m., will pass by some of D.C.'s most important real estate, but the Women's March route still isn't completely finalized.

The rally, which invites attendees to "Trump the inauguration" is expected to attract 200,000 people. The New York Times reports that after the group meets at Independence Avenue and Third Street Southwest, which is listed on the permit as the official starting point, the march will head down Independence Avenue and finally disperse at Constitution Avenue near the Washington Monument. NPR reports that the march will be held on the National Mall, the National Park Service-run national park that runs through downtown D.C. and includes many of the important monuments.

No matter what the precise route is, the area between the Capitol and the Washington Monument is among the most trafficked in D.C. Most of the most famous Smithsonian museums are on that row, which means that the march will be sure to be seen by tourists and spectators alike. That's important for furthering the "pro-woman" mission.

The march's planning has come in fits and starts. After it was first controversially called the Million Women March, a reference to a 1997 march in Philadelphia organized to promote the rights of black women, it went through a rebranding to become the Women's March on Washington.

The organizers then had to scramble to secure the permits needed to hold the rally, using land managed by the National Parks Service that had largely been reserved for inauguration events. The group had initially hoped to hold the rally at the Lincoln Memorial, and though they have not rescinded their application, organizers said that they had no more interest in holding the rally at that location.

But despite all of the obstacles, the Women's March on Washington is on. It's a powerful message that, no matter who is president, women are ready to fight for their rights. That will hopefully be a message that resonates with President-elect Donald Trump during his first day in office. But no matter if he will actually pay attention to the rally, there is one thing that is absolutely certain: he won't be able to ignore it completely.