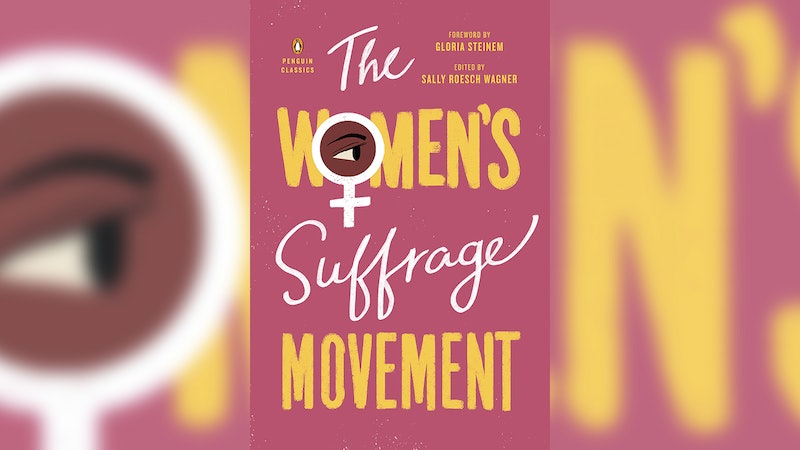 The 19th amendment turns 100-years-old next August. But women were voting in the United States over a thousand years before the 19th amendment was signed into law. In fact, women have not only been participants in the democratic process, but actually leading the continent’s democracy since before Columbus ever set foot on Turtle Island’s shores. Don’t believe me? Read on.

Out this month, a new anthology of feminist writing, The Women’s Suffrage Movement, begins the story of American voting rights long before Elizabeth Cady Stanton helped brainstorm the first Woman’s Rights Convention at Seneca Falls — and if you haven’t studied much U.S. history since, oh, high school, it’s a story that will blow your mind. Edited by Sally Roesch Wagner and on sale March 5, The Women’s Suffrage Movement is the most comprehensive intersectional anthology of writing about the women’s suffrage movement published to-date. Filled with the writings, thoughts, ideas, and stories of the known and unknown suffragists, this anthology uniquely highlights the invaluable influence of one particular group of women, who are almost never talked about when it comes to American suffrage: Indigenous women.

“Unlike almost every other historian, she [Wagner] doesn’t treat this country as if it began with Columbus,” writes feminist icon, Gloria Steinem, in her forward to The Women’s Suffrage Movement. “We are not led to assume that gender and race begin a hierarchy that is decreed by human nature… It is rare and important that this book opens by showing us that suffrage leaders were inspired by the example of free and equal Native American women.”

It’s a story I had definitely never heard before picking up Wagner’s anthology: the fact that women didn’t gain the right to vote in America in 1920 — we regained the right. Not only were property-owning women in the American colonies voting as early as the 1500s, the continent’s indigenous women had been voting for centuries before that. And not only did their votes matter, women also held essential leadership roles in the democracy that was present in America long before the founding fathers drafted their own version. (The version that ultimately excluded women and people of color, ICYMI.)

“This volume, for the first time, places the beginning of women’s rights a thousand years ago at the founding of the Iroquois Confederacy, on the shores of Onondaga Lake, in present-day Syracuse, New York,” writes Wagner, in her introduction to the collection. She goes on to explain that the Haudenosaunee (aka: Iroquois) Confederacy — the oldest, still-living democracy in the world — not only inspired the United States’ Constitution itself but also inspired women’s suffrage.

A matrilineal society, the Haudenosaunee/Iroquois government was structured with a gender-balanced leadership — one in which women traditionally made decisions like selecting the chiefs who would represent them, determine property rights and land usage, and deciding whether or not to go to war. They enjoyed physical and reproductive freedoms, and as the tribe agriculturists, held essential influence over their community’s economic interests. Wagner, in her own writing, and by featuring the writing of suffragists like Lucretia Mott, Matilda Joslyn Gage, and Stanton, explains that it was through living in proximity to these Indigenous cultures that white suffragists were influenced to fight for equal representation themselves.

“The tribe was united through the mother. Social, political, and religious life [was] all in harmony with the idea of woman as the first and highest power,” wrote Gage, in an excerpt from her text Women, Church and State, featured in The Women’s Suffrage Movement. “The earliest phase of life being dependent upon her, she was recognized as the primal factor in every relation, man holding no place but that of dependent.” Stanton wrote about the influence of Indigenous women on her own feminism as well. One example, excerpted in Wagner’s anthology, is Stanton’s The Matriarchate, of Mother-Age, which looks at the role of women throughout human history: a history that predominantly featured women’s equality or leadership. These writings and others, Wager further explains, were suppressed by the National American Woman Suffrage Association for over a century.

She’s also quick to note that for as much equality as Indigenous women enjoyed within their own cultures and clans, they were being increasingly stripped of their rights and freedoms by the ever-encroaching colonizers. “History is not inevitably progress nor is it linear. Rights gained may be taken away; concerns at one time may remain centuries into the present moment,” Wagner writes. “So it is with Native American women’s history. As they were modeling the way to U.S. women to greater authority over their lives, that authority was at the same time being taken away from them through violence, intimidation, law, and religion.”

Not only does The Women’s Suffrage Movement expose readers to the long-neglected intersectional history of women’s rights in America—celebrating the activism and writing of not just these Indigenous women, but women of a wide diversity of races and classes—it also serves as a reminder to readers that political gains once won can be lost, that rights and freedoms once enjoyed can be swiftly taken away if we stop paying attention.

“The belief runs deep that the history of women in the United States is an undeviating line of steady progress toward greater freedom,” writes Wagner. “In truth, the American woman’s story is one of tremendous losses of liberty, regained and extended only through great struggle, and maintained only through continual vigilance.”