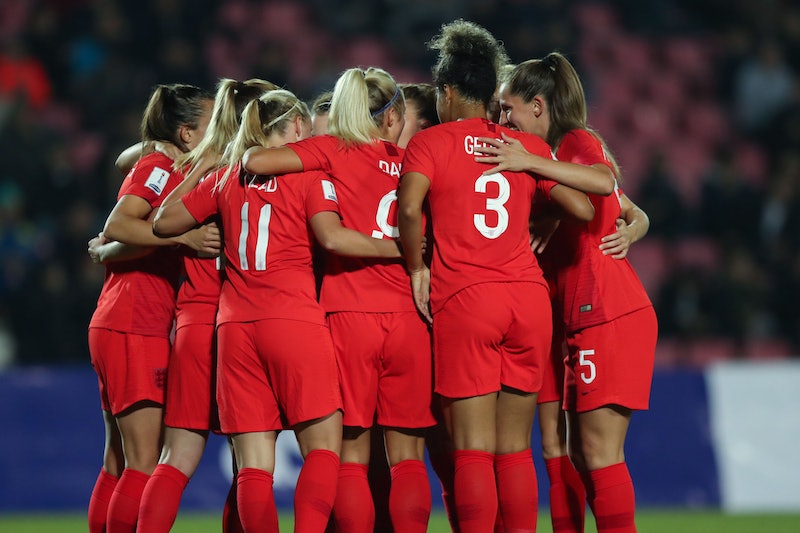 Lynne Cameron for The FA/Shutterstock

Last summer, two things happened that had previously seemed impossible: there was a heatwave that lasted more than a week, and England made a World Cup semi final. Fast forward 12 months and there is a real possibility of an England team competing for the World Cup for a second year running. This time it’s the women’s team, and despite what you may have been led to believe, there’s actually a lot more at stake this summer than last.

When England’s Lionesses reached the World Cup semi final in 2015, it changed women's football in the UK for the better. Although they lost in the cruellest way — Laura Bassett scored an own goal in the 92nd minute — the team achieved much more than they may have realised simply by placing third. After the tournament ended, participation among females aged 16 and over with FA affiliated teams increased by two percent, the BBC reports, and 218 youth female teams were formed (an increase of 6.1 percent). The tournament was televised and momentum grew with each round the Lionesses got through — something that had never really happened before.

When England’s Lionesses reached the World Cup semi final in 2015, it changed women's football in the UK for the better.

I have played football since the age of four. When I turned up to play, I was the only girl. It remained that way until the age of 11, when I was forced to quit my club and try to join a girls team. But finding one wasn’t easy — girls teams were very rare. Fortunately I was able to join the Shrewsbury Town setup, but even that was very basic training and the games were few and far between. There simply weren’t enough teams to play against. Women’s football was never on the television; the closest I could find to any sort of coverage was the She Kicks magazine. The football kits swamped us, the shirts dangled below our knees, and the socks were almost as long as my leg. Jump forward to 2019 and, thankfully, the England women’s team has a kit that could rival the men’s.

However, providing the right clothing is not enough. The female game is still light years behind the men’s in so many ways. For example, why do we have to call it “women’s football?” It’s just football. It’s exactly the same game with the same rules and the same emotions. And we need to show this to the world — that’s why it’s vital that England deliver this summer and inspire the next generation of young girls.

It’s vital that England deliver this summer and inspire the next generation of young girls.

The BBC has secured the rights and has promised extensive coverage of the tournament on the television, radio, and online. They also showed the FA Cup final on BBC One on May 4 2019, which saw Man City win and record numbers of people in the stands. This is all really promising. However, the FA Women’s Super League (WSL) clubs are still unable to hold games at main stadiums as their matches attract, on average, just 937 people to watch. Compare that to their international counterparts Atletico Madrid and Juventus, who have respectively seen figures of 60,000 and 39,000, and you begin to see how far we have to go. It’s a massive indicator of where we are at; the very top level of women’s football in England is being watched by, on average, fewer than 1,000 people. On top of that, highlights are stuck on in the middle of the night and, although support from fans of the affiliated men’s sides is increasing, there is still a colossal gap.

Another issue that holds the female game back from growing is the gulf that exists between teams at the top and the bottom of the WSL. And the gap from them down to the Championship is even bigger. There are four full-time leagues for the men, but the women have just one, and the truth is not all the teams in that are full time.

If England deliver this summer, things will begin to happen from the ground up. If a success leads to another surge in participation among women, the FA will invest more resources and money in the game (hopefully), and the gap between men’s football and women’s football, as well as between the women’s leagues, will slowly begin to close.

The very top level of women’s football in England is being watched by, on average, fewer than 1,000 people.

There has recently been a huge step towards this goal. In March 2019, the FA unveiled Barclays as the new sponsor of the WSL, which marks the largest investment in UK women’s sport by a brand in history. In order to progress and grow, the women’s game has to become more commercially attractive, and this groundbreaking deal is the first big step towards that. It also means that, for the first time, there will be prize money available for the number one team in the WSL.

If the Lionesses win the World Cup tournament for the first time in June 2019, the impact would be felt across the entire football pyramid. They are going to have unprecedented television exposure, and they must capitalise on this. Luckily, they have a talented team and an exciting manager in Phil Neville, who has managed to bring extra media attention to the team, which is no bad thing. Many of this year’s squad are from a time like mine; as a child they would have been the only girl in their team, and they would have had to be twice as good as all the boys to get half the opportunities. They also would have had to show great strength of character to stick with a sport that many would have said wasn’t for them. I hope they can channel this mentality into success, which will not only bring the first World Cup win since 1966 to England, but inspire and propel the next generation of female footballers into the spotlight.