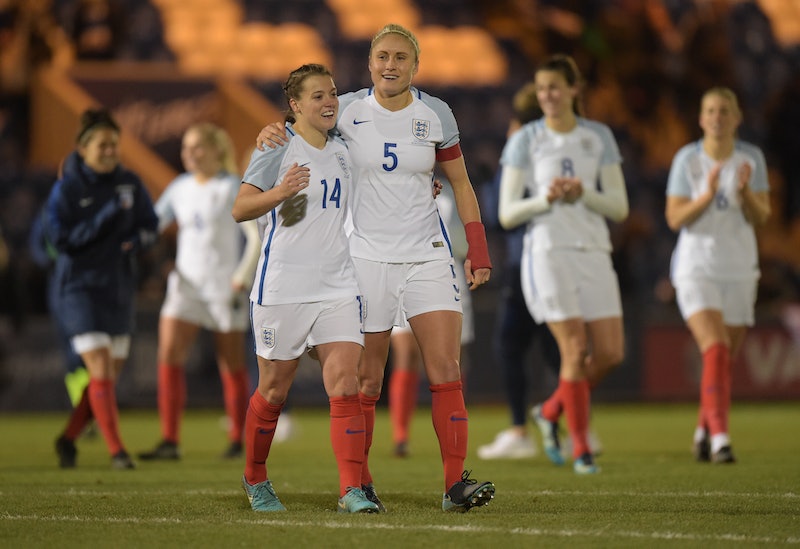 Joe Toth/BPI/Shutterstock
By Rebecca Fearn
May 8, 2019

The women's World Cup in France is right around the corner. And while the kit's design has been released, fans were still waiting on the full team line up ahead of the tournament — until now, that is. The World Cup women's football team has been announced by boss Phil Neville, and it's a strong one, that's for sure. What's more, the news was announced in a rather fun, unique way, making it even more exciting for football fans.

The news was announced via a series of exciting social media posts by top sporting legends and others in the entertainment biz, including David Beckham, Raheem Sterling, Alan Shearer, Kelly Smith, James Corden, and Ellie Goulding. Each celeb revealed to the players that they had been chosen to head to France, making it a super special moment for all.

Speaking about the nature in which it was revealed to the women, Phil Neville explained: "We wanted each player to have a special moment when their name was revealed, knowing they are going to a World Cup, as I never did as a player. It is the biggest thing in their lives and something they’ve dreamed about."

He continued: “We have to make these players visible, we want everybody around the world to buy in to what will be the biggest Women’s World Cup of all time.”

So onto the players. Captain Steph Houghton will lead a team of 23 women to France, including Karen Carney and Jill Scott, both of whom have already competed in the major tournaments four times.

The full squad is as follows:

Discussing his team and the decisions made, Neville said:

"This is a significant moment in our World Cup campaign. Picking a squad is never easy but I believe in this group and I know they will be ready to help us perform at our very best at the finals."

He added: "We know what we are capable of achieving and are determined to do all we can to be successful. We keep saying it but the hard work starts now and we are going to give it everything we have to make the nation proud."

The Women's World Cup will begin on 7 June 2019, and run to 7 July 2019. All games will be shown live across BBC channels. The Lionesses are set to meet Scotland in their first match, followed by Argentina and Japan.