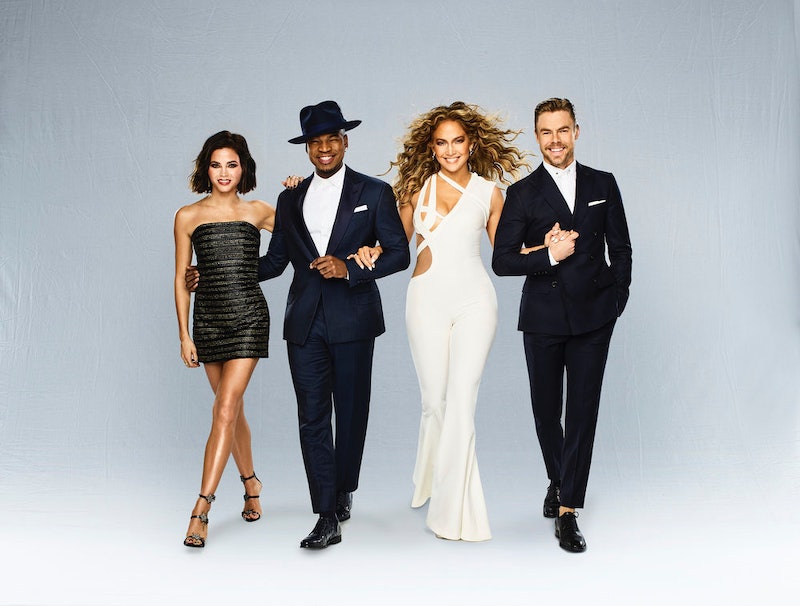 World of Dance Season 2 is almost here, premiering on Tuesday, May 29 at 10 p.m. ET on NBC. The talent for this year of the dancing competition show already looks impressive. Below, Bustle has exclusive photos of the World of Dance Season 2 contestants, ranging from badass ballroom dancers to teenage hip hop performers and everything in between.

The show made a splash in the world of reality TV in Season 1, and according to Deadline, World of Dance has already been renewed for a third season before Season 2 even debuts. The outlet reported that the program, which features judges Jennifer Lopez (who is also Executive Producer), Derek Hough, Ne-Yo, and host/mentor Jenna Dewan, was the "most-watched new summer alternative series in a decade.

"We set out to make World of Dance a competition series of the highest caliber — every act that hits the stage gives their all and challenges themselves against the most elite athletes in the world," Lopez said, according to Deadline.

Last year's Les Twins — Laurent and Larry Nicolas Bourgeois — took home the first-ever million dollar prize, and now there's a whole new batch of dancers hoping to do the same. The buzz surrounding the star-studded show is bigger than ever, so these performers better be ready to deliver. But, per their NBC bios spotlighted below, they all have what it takes.

Above: 3 Xtreme — Hailing from New Jersey, this group of teenagers are huge fans of Judge J-Lo.

Below: Avery & Marcus — This 13-year-old and 17-year-old duo has only been working together for a year and a half prior to entering the competition.

Above: Charity & Andres — The contemporary dance partners have been dancing together since they were eight years old, and their mothers are both dance instructors.

Below: Daniel & Mishella — The ballroom dancing 10-year-olds are 10-time national ballroom champions of their age group.

Above: Cubcakes Dance Crew — There are 14 members in this hip-hop team, created by choreographer Thalia Ramos.

Below: Dem Raider Boyz — This all-male team is a three-time national champion in the National High School Stepping Competition.

Above: Dollhouse Dance Factory — This team has already performed with a huge name in entertainment — Justin Bieber.

Below: Expressenz — Expressenz remains undefeated in every competition it's ever entered as a group.

Above: Elektro Elite — This Arizona hip-hop group began their training in ballet, contemporary, and jazz before latching onto hip-hop.

Below: Lucas Marinetto — The tap dancer has been featured on So You Think You Can Dance and A Christmas Story live onstage.

Above: Eva Igo — The 15-year-old solo dancer as a star of World of Dance's first season, and is returning for a second chance.

Below: FRESHH — These four Canadian hip-hop performers won gold at the Hip Hop International World Finals back in 2014.

Second To None — Victoria Caban

Above: Second To None — These three tap dancers have been featured on the Ellen Degeneres Show.

Below: Victoria Caban — Flamenco dancing comes to the forefront with this performer, who is also a singer and an actress.

Above: Silver Beat — Sherrie Silver of Silver Beat escaped Rwanda during the 1990s conflict, and now leads an entire group of dancers from Rwanda and Nigeria.

Below: S-Rank — S-Rank's leader, Melvin, competed on the last season of World of Dance before forming the new group.

Above: ThaMOST — ThaMOST aims to have dancers of all different ages, shapes, sizes and genders onstage.

Below: The Bradas — This athletic group says that their success is the result of an intense training schedule.

The Jam Project — The Ruggeds

Above: The Jam Project — This dance team meshes rock and roll style with their traditional tap routines.

Below: The Ruggeds — The Ruggeds are a group of childhood best friends who have worked with huge stars like Justin Bieber and Rita Ora.

Above: Vivian Ruiz — Vivian won first place in the contemporary division two years in a row at the Youth American Grand Prix.

Below: The Gentlemen — Hailing from California, these two brothers say their favorite judge is Ne-Yo.

Above: 6 Feet Deep — These twenty-somethings met at a dance class at Arizona State University and eventually formed their own team.

Below: Alisa & Joseph — Alisa and Joseph are a real-life couple competing as an urban dance duo.

Below: Ashley & Zack — This duo of contemporary dancers accompanied Derek Hough on his MOVE tour.

Above: Bdash & Konkrete — These krump dancers hope to bring something completely new to World of Dance.

Above: Brooklyn Dancesport Club — These eight dancers have 11 national championship titles combined, and typically perform as four couples rather than an entire team.

Below: Brotherhood — This group of 11 twenty-somethings has already made a splash online, with more than six million views on YouTube of their performances.

Above: Club House — They're the first House group to ever take part in World of Dance, and they also integrate more classic styles like swing and tap.

Below: Connection — Connection was a finalist at the Hip-Hop International World Championship before setting its sights on World of Dance.

Above: Dragon House — These Atlanta natives are experts in animation, and hope to solidify the genres spot in dance.

Below: Elektro Botz — This robotics crew was part of the Outlawz on Season 11 of America's Got Talent.

Above: Fabulous Sisters — The Toyko natives know a thing or two about the show — they placed first in last year's youth division.

Below: Flip — This all-girl group has been together for about a decade, and taken home silver and gold in the youth World Hip-Hop Championships.

Above: Funkywunks — A hip-hop team that loves to do good, Funkywunks has performed in the past for the Alzheimer's Association and Dancing for Diabetes.

Above: GirlCool — This retro team is extremely into modernizing their 1960's vibe.

Below: Iowa Girlz — Iowa Girlz are no stranger to television — they've been featured on America's Got Talent and Dance Moms, not to mention a stint on tour with Justin Bieber.

Above: Hilty & Bosch — The Japanese duo has been dancing together for the past 20 years.

Below: L & J — Lukas and Julia make up this duo, and they actually work in different countries — Canada and France — as choreographers and dancers.

Above: Jonas & Ruby — Jonas and Ruby teamed up six years ago to take on ballroom dance as a unit.

Below: Lil Motormouth — This dancer started dancing at age 9, and typically practices in his garage. World of Dance is about to be a big change.

Above: Josh & Taylor — Returning from Season 1, these two have joined forces to better their odds in Season 2.

Above: Karen Y Ricardo — Another real-life couple, this one specializing in Latin cabaret, they are the only couple in the world to win nine world titles.

Below: Morning of Owl — World Of Dance will be the first ever American performance for this Korean street fusion dance group.

Above: Lil Killaz Crew — Hailing from Minsk, this break dancing team has been undefeated since 2015.

Below: Meant 2 Be — This group of five teenagers is all about integrating the 1990's into their routines.

Above: Lock N Lol — Lock N Lol is the first Korean team who ever won the Hip-Hop International World Championship.

Below: Marissa & The Heartbreakers — This group of seven women from Los Angeles wants to spread a message of female empowerment.

Above: LULAS (Love U Like A Sister) — These two young dancers met just a few months ago via Instagram, and have since become best friends.

Below: Jaxon Willard — This contemporary solo artist impressively self-choreographs all of his own routines.

Below: Sean & Kaycee — Sean is a familiar face from Season 1, but the group hopes the addition of Kaycee will put them over the top.

Above: MarInspired — This male duo are members of Marinda Davis' company.

Below: DNA — Another Season 1 reprisal, DNA is trying once again to take home the title.

Below: Poreotics — If Poreotics looks familiar, it's because they won America's Best Dance Crew in Season 5, and were featured in Bruno Mars' video for "The Lazy Song."

Above: Pasha & Daniella — This duo was the first couple in four decades to represent the U.S. at the World Championships in three different styles — Latin, ballroom, and 10-dance.

Below: St Kingz — St Kingz is a comedy/hip-hop group who once worked as choreographers for Mariah Carey.

Above: Pursuit — These seven dancers are ages 19 through 22, and blend contemporary and hip-hop dance styles.

Below: Royal Flux — A return from Season 1 of World of Dance, Royal Flux is back to prove themselves.

Above: Rascals — This team from Hawaii has traveled a long way from Waipahu to prove themselves on the World Of Dance stage.

Below: Tustin Dance Team — This group of guys met at a high school dance class before getting serious about competition.

The Lab — The Rock Company

Above: The Lab — Another return from Season 1, The Lab was last year's highest-scoring Junior team.

Below: The Rock Company — With their dance studio not far from where the recent Las Vegas shooting took place, this group is headed to World of Dance to spread a message of love.

Above: The Untouchables — This group of 14 members is an elite ballroom dancing team back for another season.

Below: Quad Squad — These girls from Anaheim Hills, California range in age from 11 to 17.

Above: Tribe Unleashed — These Pittsburgh natives are former cheerleaders known for impressive stunts.

Below: The Pulse — This group of teens returns again for Season 2, and hails from the same studio as judge Derek Hough.

Above: Michael Dameski — Michael starred as Billy in the Broadway musical "Billy Elliot," and also won the Australian version of "So You Think You Can Dance."

There are definitely a lot of contestants vying for the prize this season on World of Dance, but only a select few will make it to the top. Catch it all starting May 29 on NBC at 10 p.m. ET.