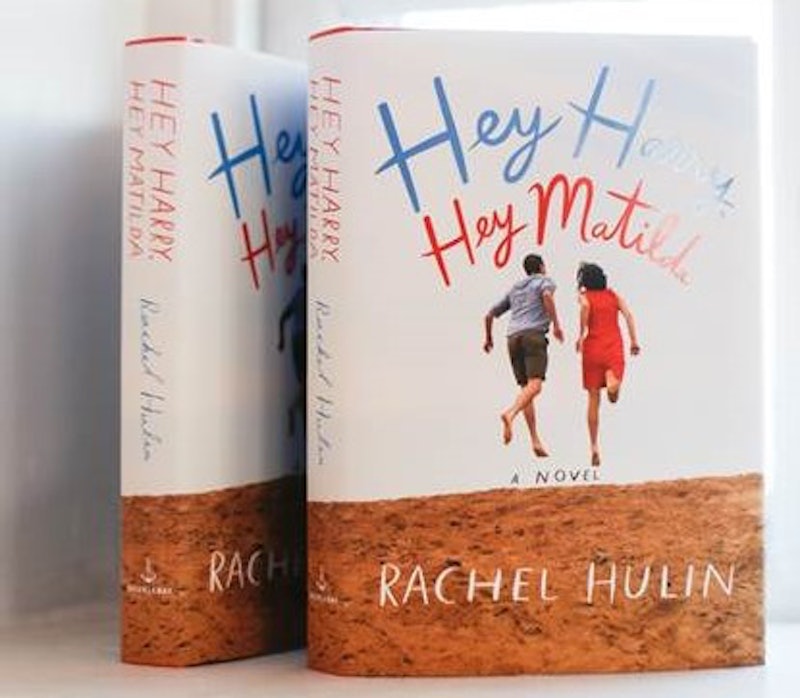 Hey book-lovers, the next time you’re looking for a great new read, head on over to… Instagram? (And no, I’m not talking about online book clubs or #shelfies here.) What I’m talking about is a whole lot cooler, and it’s titled Hey Harry, Hey Matilda — a debut novel and a debut Instagram novel that goes on sale (in traditional print format) on Jan. 17, 2017. But not only is Hey Harry, Hey Matilda a debut Instagram novel, it’s also considered the world’s first Instagram novel; and yeah, as an Instagram lovin’ bookworm, I am entirely stoked that this is now a thing.

Readers (and ‘gramers) can thank writer and photographer Rachel Hulin for Harry and Matilda — two 30-something fraternal twins who are as funny as they are dysfunctional, and whose stories are told entirely through e-mail exchange. “Hey Harry,” Matilda writes. “Hey Matilda,” Harry writes back. And so they proceed. Harry is an unpublished writer and an untenured English professor, Matilda is a frustrated artist-turned-wedding photographer, and neither twin is especially fulfilled by their current endeavors — personal nor professional. Charming and hilarious, though both perhaps a tad too cerebral for their own good, Matilda and Harry are each hiding a secret; and this novel meets the duo just as those secrets are about to come to a head.

For Matilda, it’s that she told her boyfriend that Harry is her dead twin — and a year later she still hasn’t come clean. Further complicating matters is the fact that her boyfriend actually does have a dead twin himself. (What are the odds, amirite?) Harry, on the other hand, is sleeping with one of his English students, and now it appears she’s pregnant. As such, both Matilda and Harry have set themselves up for a figurative sh*tstorm of scandal, shame,discomfort, and drama — and they’re just getting started.

Readers first met Harry and Matilda on Instagram over a year ago, via @heyharryheymatilda, which is now up to 7,061 followers — and counting. But why decide to publish a novel through Instagram in the first place? Especially since, as reported in a Washington Post interview with Hulin in 2015, she had completed the entire manuscript for the novel before @heyharryheymatilda was even born.

“I love telling stories in a serial way, slowly introducing characters to readers, having them become involved and start to comment and further the story,” said Hulin, in an interview published in Wired back in October of 2015. “I think the interaction of readers really enhances the telling of a story.”

The photos are curated from those taken throughout Hulin’s photography career, as well as a number of original images she created especially for Hey Harry, Hey Matilda. Some feature the characters themselves, while others give readers a glimpse into the New England settings Harry and Matilda occupy, from New York City to Connecticut. Still more are simply designed to evoke a feeling or a memory, accompanying the text in a less literal way. Each Instagram post is captioned with one of the e-mails exchanged between Harry and Matilda, as their individual and shared stories play out over the course of about nine months.

“I love Instagram,” Hulin is quoted in the Washington Post interview. “I’m fascinated by this idea of everyone turning their lives into these daily visual narratives.” About her own work, she said: “It’s like live streaming a novel. It’s like it became performance art.”

For readers who don’t want the plot of Hey Harry, Hey Matilda spoiled before reading the book — and believe me, there is a major twist or two in store and the end — but can’t resist checking out the Instagram, be sure to scroll all the way to Hulin’s first post, which corresponds to the first page of the novel. There you’ll find a map of the Baltic sea, accompanied by an e-mail written by Matilda, who is convinced her bank account is being slowly drained by a fraudulent hacker known as SBUX (unbeknownst to Matilda, these are actually her own Starbucks charges) instantly endearing her to readers the world over. (Don’t pretend you haven’t been there too.)

Hey Harry, Hey Matilda is published by Doubleday and will go on sale January 17.