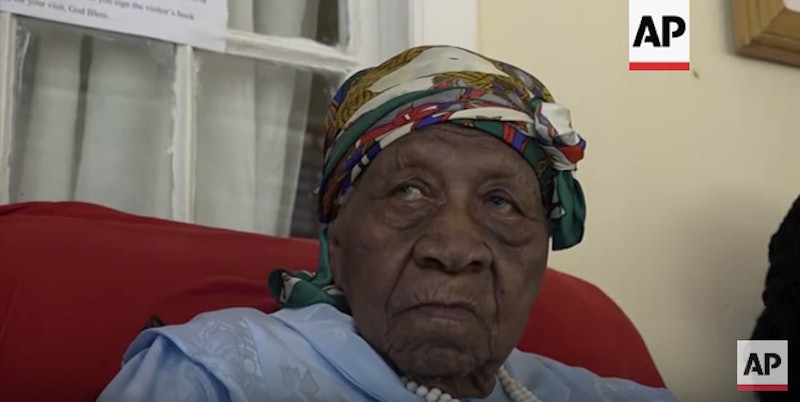 On Sept. 15, Jamaican woman Violet Mosse-Brown passed away — at the age of 117. She was believed to be the oldest person in the world, having held that title for around five months.

Mosse-Brown was born on March 15, 1900. That year, William McKinley was President of the United States, the Gold Standard was ratified in Congress, the Second Boer War was underway between Great Britain and South Africa, L. Frank Baum's The Wonderful Wizard of Oz was published in Chicago, and Mosse-Brown's home country of Jamaica was still 62 years away from being founded. (Prior to that, it was a colony of England.)

As CNN noted when Mosse-Brown became the world's oldest woman back in April, the music teacher and church organist has seen her country undergo incredible changes.

She remembers when the first cars and planes came to Jamaica, as well as the first electricity and piped water. She has lived through both world wars and the founding of her country. She's also the last living subject of Queen Victoria.

In her well-over a century of life, Mosse-Brown was an active member of her community. In addition to working as a music teacher and being a church organist for over 80 years, she took over her husband's job after his death in 1997, and became the record-keeper for the local cemetery.

"I tell you, these young people these days have it easy," Mosse-Brown said in a 2011 interview with local Jamaican newspaper The Gleaner. "Piped water, taxis and buses to bring them where they want to go, everything to their convenience. When I was younger, and even as an adult, I had to work so hard that sometimes when I look back, I cry at how hard I had to work to make a living for my family."

What was Mosse-Brown's secret for longevity? She didn't have one. She told the The Gleaner: "Really and truly, when people ask what me eat and drink to live so long, I say to them that I eat everything, except pork and chicken, and I don't drink rum and them things."

Mosse-Brown became the world's oldest person in April, following the death of Italy's Emma Moreno, who was also 117 at the time. Prior to her death, Moreno was the last living person to be born in the 1800's. Unlike Mosse-Brown, Moreno claimed to have two secrets to her old age —eating two raw eggs a day, and staying single. "I didn’t want to be dominated by anyone,” she told the New York Times.

With Mosse-Brown's passing, 117-year-old Nabi Tajima of Japan becomes the oldest person in the world. Tajima was born on August 4th, 1900, in the city of Kagoshima. She has nine children, 28 grandchildren, 56 great-grandchildren, and 35 great-great grandchildren. Tajima has not commented publicly on her secret to a long life, but Misao Okawa, who preceded Tajima as Japan's oldest person, credited her old age to "eating delicious things."

"Eat and sleep and you will live a long time," Okawa told the Japan Times. "You have to learn to relax.”

While Japan has the oldest population in the world (with almost 27 percent of their population 65 or older) supercentenarians — people who live over the age of 110 — are spread around the world. The Gerontology Research Group, an L.A.-based group that keeps track of the world's oldest people, currently lists 41 living supercentenarians whose average age is 113. Of the 41, 40 are women.

Delphine Gibson, the oldest American alive, celebrated her 114th birthday on August 18th of this year. She credits her long life to her faith in God and says the church plays an important role in her daily life.