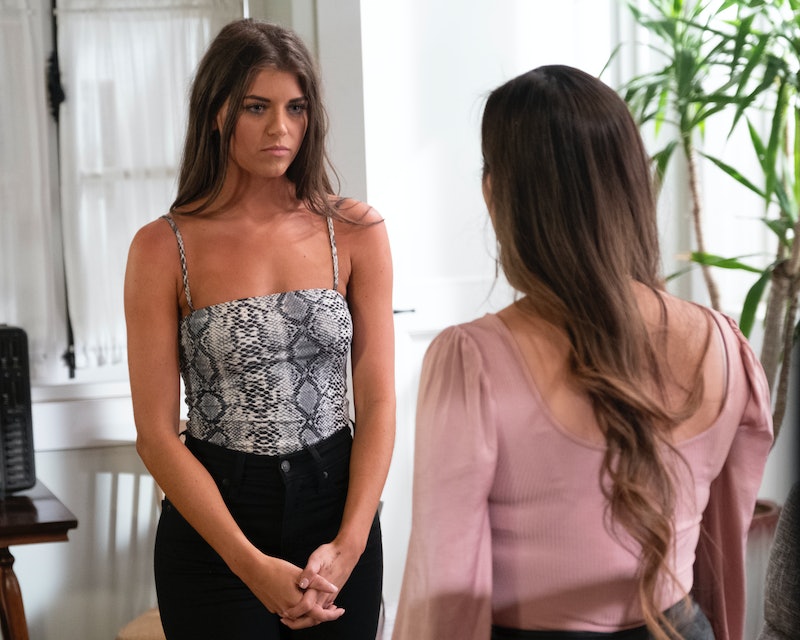 Madison Prewett and Peter Weber had multiple intense conversations during part one of Monday night's Bachelor finale. However, the Alabama native brought along a token of comfort as she prepared to meet Peter's parents for a second time. As many viewers noticed, there was a word written on Madison's hand during The Bachelor finale that was difficult — if not downright impossible — to make out from a quick glance. However, that didn't stop fans from pointing out the mysterious mark on Twitter and attempting to figure out what the tiny inscription said.

Some thought it was possibly a tattoo that they'd never noticed before, while others were sure it was some sort of subtle reminder Madison wrote in order to help get through the tough day. But thankfully, this is now one mystery that can easily come to a close. The marking didn't appear on her hand during other scenes, suggesting it wasn't a tattoo but a temporary writing. And Twitter user @Conor_Miller37 deduced that the word in question was "Proverbs," which is a book found in the Old Testament of the Bible. However, the writing is too small to make out which particular verse Madison was citing, given that the number portion on her hand is indistinguishable on-camera.

It could be any passage that speaks to Madison on a personal and emotional level, so it's difficult to know what she's referencing. That being said, if one was to venture a guess, it could be the same passage that Madison features on her Instagram profile: “Proverbs 31:8," which reads, “Open your mouth for the mute, for the rights of all who are destitute.”

Over the last several weeks Madison has made it clear to both Peter and viewers how much her faith means to her, which is why it makes sense that she would want to have a Bible verse close at hand (quite literally) while trying to figure things out with Peter. Their relationship started struggling when Madison revealed to Peter that she was saving herself for marriage and would have a difficult time moving forward with him if he were to be intimate with any of the other women. Peter then confessed that he had been intimate with Hannah Ann and Victoria F., and Madison has felt torn ever since.

The message on Madison's hand may have been meant to serve as a reminder to herself to stick to her beliefs and not let her feelings for Peter make her forget the values that she's fighting for. And if that's the case, the reminder seemed to have worked. Madison defended herself to Peter's parents and ultimately decided to self-eliminate, feeling that the two of them weren't compatible enough to make their relationship work out in the real world.

But despite the fact that she sent herself home, the promo for Tuesday night's episode shows her returning to the series, perhaps even to win Peter back. So while we may have solved the mystery of Madi's hand, Peter's Bachelor ending continues to be more of a question mark than ever.