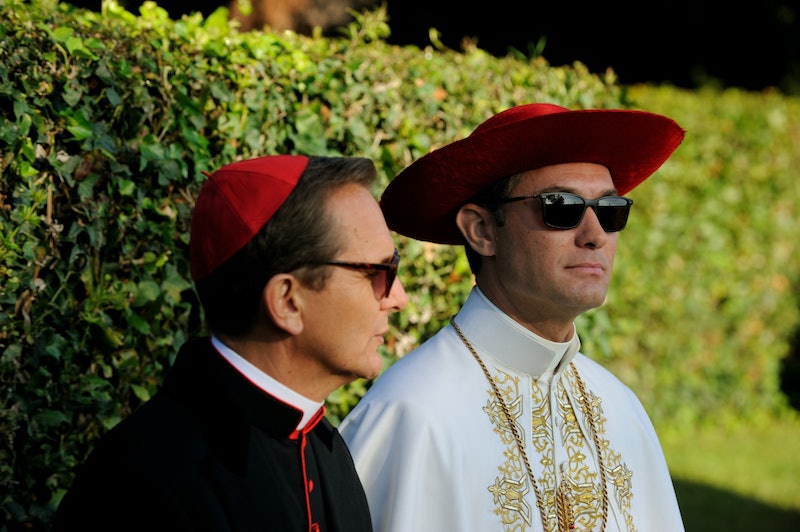 If you're still loving HBO's The Young Pope even after the memes have died down, I have some good news and some bad news. Let's get the bad out of the way first. Because HBO decided to air two episodes per week, the first season is already ending on Monday, Feb. 13. As for the good news, the people behind the series are already preparing for The Young Pope Season 2. Though The Young Pope hasn't been officially renewed yet, back in October 2016 before the series even hit HBO, The Hollywood Reporter reported that Paolo Sorrentino was already writing the second season. From there, the scripts would be brought to Sky Italia, HBO, and France's Canal Plus for a second season pickup.

At the time, Sky Italia's Chief of Content, Andrea Scrosati, told THR, "We are of course hoping to do it ... but nothing is signed yet." That's definitely a positive sign, but even if The Young Pope gets an official renewal, that doesn't mean it will be on your TV anytime soon. The series is obviously lovingly produced, and each scene drips with sumptuous detail — these things take time. And according to a Variety report from October 2016, once a second season is ordered, it will start shooting in Summer 2018. That means a very long wait for more of The Young Pope, so here are a few suggestions for series with similar themes to check out in the meantime.

If you think Lenny is the worst religious figure on TV, then you must not have seen the first season of AMC's Preacher, an irreverent adaptation of the extraordinarily dirty comic of the same name. It's equally fascinated with and repulsed by religion, and may be even more sacrilegious than The Young Pope.

Another HBO drama that ponders reality and is filled with abstract asides and stylistic flourishes. Both shows are also showcases for actors you'd usually find in film giving some of their best performances in years.

Lucifer might be the single TV character most like Pope Pius/Lenny. He has a complicated past and family (he's the devil, God is his dad, his siblings and mother are angels), is starting a new job in the beginning of the series (piano bar owner/assistant detective), and enters every room with incredible confidence.

This show generated quite a lot of buzz before and as it premiered, but like The Young Pope, there's much more to it than just that first impression. The Night Of has many deep themes and features incredible performances.

And finally, Young Pope, meet the old Popes. Unlike the other shows on this list, The Borgias has been over for years, but if The Young Pope has you thinking that major institutions could never be this intense, watch this Showtime series and you'll see that there's nothing wilder than dramatized history.