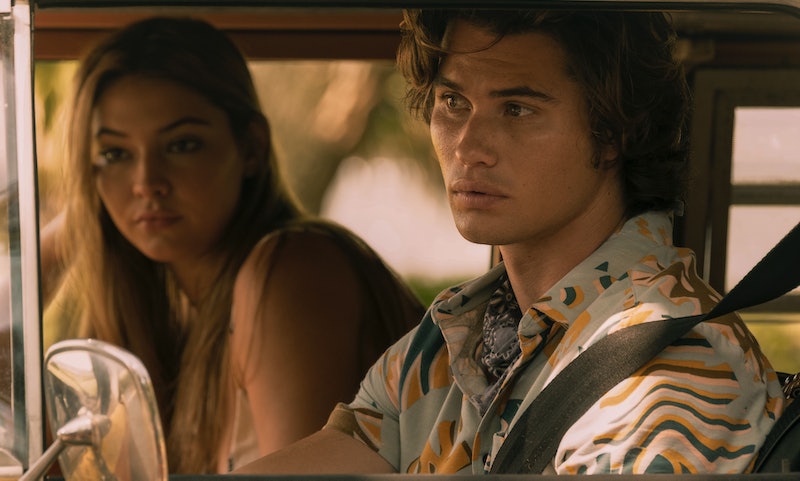 Spoilers ahead for Outer Banks Season 1. The Pogues started Outer Banks with one mission: to "have a good time, all the time." But by the end of the season, that plan falls completely apart: they find The Royal Merchant treasure only for Ward Cameron to steal it, get tied up in a murder, and barely escape death numerous times. In the final scene, Sarah and John B miraculously survive a hurricane and get rescued from the sea by a fishing boat headed to the Bahamas — where the gold just happens to be — while the rest of the Pogues are left to believe their friends are dead. When asked about his theories for Outer Banks Season 2, however, star Chase Stokes says he thinks John B's luck may run out.

"I don't know how many lives [John B's] got left, at this point," Stokes tells Bustle. Indeed, the end of the season seems to hint at (another) storm coming, with the fisherman who picked up John B and Sarah telling the two young lovers, "I was young and in love once. Turned into a goddamn disaster. It was fun while it lasted, though."

Madelyn Cline, who plays Sarah, agrees that the couple is living on borrowed time. "I think at some point, we will see what they're running from catch up to them," she says, adding that she thinks the Camerons will "definitely find out" that Sarah and John B are alive, forcing some kind of confrontation.

But that doesn't mean it will be all doom and gloom. Cline says she hopes Sarah and John B get to ride out the adventure a little bit longer. "You have these two kids who are on the run from something very serious, but then you also know they're headed for this idyllic, beautiful vacation destination," she says. "It feels kind of Castaway-ish. It's very romantic."

And though there may be a few fans still rooting for John B to be with Kiara, Stokes thinks he and Sarah will last. "We never know what could happen. Maybe sh*t hits the fan and... we find out that John B loves Kiara," he says. "[But] I think him and Kie are what a lot of our generation and the younger generation need to see — is two people who are of different [genders] that can be best friends."

If John B and Sarah do get their happily ever after, Cline thinks Sarah will use the money from The Royal Merchant's treasure to open her sandwich shop, donate to wildlife funds, and make sure that "everybody who has been affected by this crazy adventure is taken care of." At the very least, hopefully she and John B will get to the gold before the fisherman's prediction comes true.