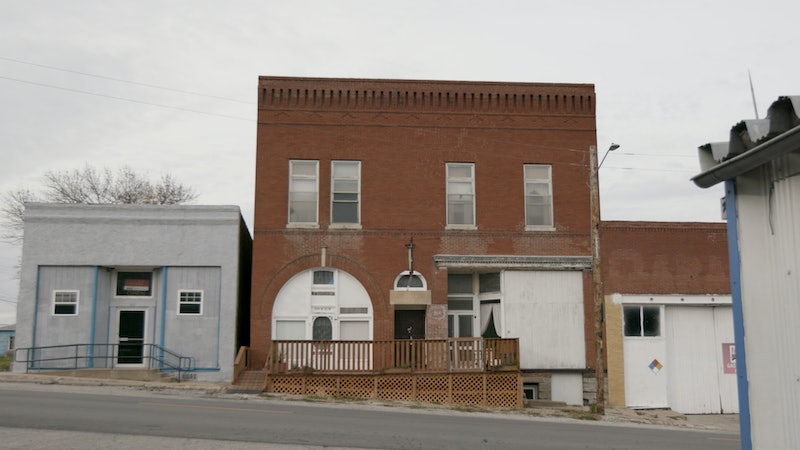 True crime junkies have likely heard about the mystery of Skidmore, Missouri. The small town is notorious for the violent acts of murder that have occurred there, and the fact that many of them remain unsolved. A new SundanceTV documentary, No One Saw A Thing, delves into one crime in particular that's happened there, and the theories surrounding Skidmore, Missouri suggest that the doc will be one wild ride.

According to the New York Post, the six-episode true crime series turns its eye on some of the more grisly crimes committed in Skidmore — namely, the 1981 murder of Ken McElroy, which was reportedly witnessed by dozens of residents and yet somehow yielded no criminal charges. Other tragedies like the 2001 disappearance of Branson Kayne Perry, and the 2004 death of Bobbie Jo Stinnett, which took place in the same town, are also explored.

There are a few theories about why this town finds itself at the center of so many gruesome events, and why no one seems to be talking even more than 30 years later about who is responsible for McElroy's death. The place is at once shrouded in mystery, and full of people who are just trying to live a normal life away from the prying eyes who want answers.

The filmmaker behind No One Saw A Thing, Ari Belkin, thinks that Skidmore exists both mentally and geographically in a place that breeds vigilante justice — McElroy was allegedly the "town bully," which is suspected have contributed to his murder.

"An element that goes unnoticed in today’s society is the legacy, the influence, that vigilante phenomena have in culture and society," Belkin told the Post in the piece linked above. "Especially people in that rural area of Missouri, who grew up on Jesse James, grew up on the Bald Knobbers — one of the first vigilante groups in America — grew up on stories of outlaws in the Wild West, taking the law into their own hands. It prioritizes solving problems with violence."

Of course, there are internet sleuths trying to piece together the mysteries of Skidmore, and investigate why its history is so heavily dotted with crime. Some Reddit users have suggested that the incidents have spawned from drugs. Others have blamed "small town thinking" for the violence, suggesting that when you grow up knowing absolutely everyone in a tiny town, the rivalries you form can grow more intense and violent.

And on another note, some online sleuths are inclined to believe that McElroy's murder started a chain reaction of intergenerational trauma that has affected the whole town ever since. Given that so many witnesses allegedly saw his murder happen, yet no one came forward, perhaps their descendants and the descendants of people involved in the killing itself have gone on to unhealthily grapple with that baggage, and potentially turn violent themselves.

There are also some who think rather than seeing McElroy's death in particular as a case of vigilante justice, it's worth questioning if the townspeople felt like they were acting in the case of self-defense, given that McElroy was suspected to be violent himself.

It's undeniable that Skidmore's history is odd, but it's important to remember that these theories are just speculation. Despite its notorious reputation, Skidmore is still where real people make their homes to this day, and many of them probably want nothing to do with the sinister happenings.

"It's just another small town, the same as all the others," Nodaway County Sheriff Ben Espey told CBS News. "It kind of upsets me when I keep hearing McElroy this and McElroy that. ... This area is rolling hill farmland, a lot of common-sense people. Crime rates are low, drugs are as they are everywhere. But it's not near the issue it was five years ago."

We may never know exactly why Skidmore is the way it is, but hopefully, No One Saw A Thing will shed a little light on what has for decades been a shadowy series of events.