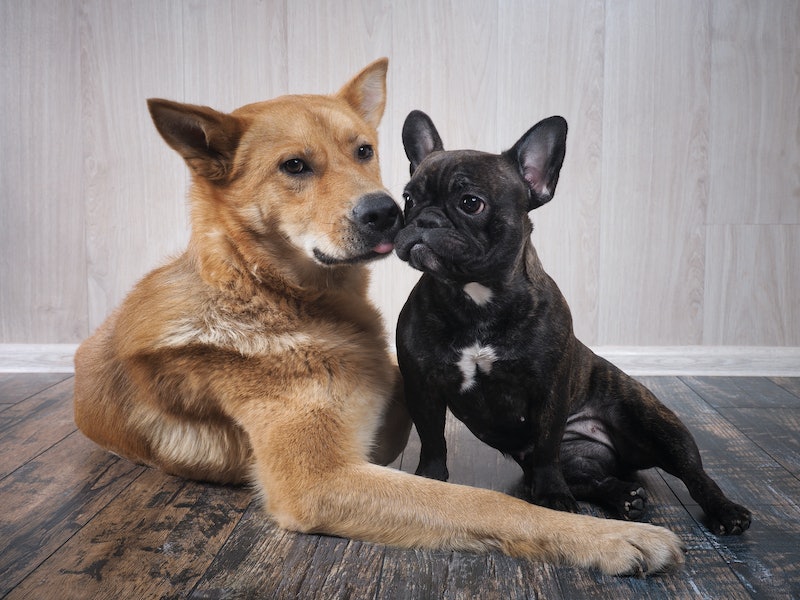 The impact therapy dogs have on humans is well-documented in the medical community. Though often associated with the visually impaired or perhaps the mentally ill, pet therapy is utilized as a means of support in settings as commonplace as the dentist, according to the Mayo Clinic. But providing emotional support can be taxing, even if you are a dog. So how does one calm a anxious canine? Why, with a therapy dog, of course (or a subwoofer, if you will) — recent research indicates that therapy dogs can calm other dogs, as well as their human friends.

It is said that you can't teach an old dog new tricks. Historically, this same attitude has been taken in regard to socializing older dogs. Researchers in Switzerland want to challenge that. The study, conducted out of the University of Bern and published in Nature, involves a category of canines who are arguably the most stressed: military dogs. In Switzerland, the duties of military dogs extend far beyond battlefield. Swiss military dogs are often used for search and rescue, detection of explosive devices, and to protect both buildings and people. To prepare this select group of elite canines for their roles later in life, the dogs are often deprived of the socialization typically given to a pet; their exposure to rewarding interactions with humans and other dogs alike is strictly limited. A lack of socialization in young dogs is linked to more aggression and defensive behaviors later in life, traits that are valued in their lines of work.

The ultimate goal of the experiment — led by Dr. Nastassja Gfrerer — was to investigate whether exposing a military dog to another nonthreatening and sociable dog would result in the reduction of observable stress-related behaviors. During the study, a military dog would participate in weekly socialization sessions with another non-military dog or group of dogs. The sessions were unstructured, allowing the subjects to basically do their own thing for three hours. Rest assured, no interactions took place if it was deemed unsafe for either participating party to do so. Plus, trained supervisors were always present and ready to intervene.

In total, 29 military dogs (of the Belgian Shepherd and Malinois breeds) participated in the study, and were subsequently evaluated for hyper-vigilant, stress-related behaviors. The evaluations included measuring reactions to unfamiliar objects, as well as to another unfamiliar dog. Twenty-seven military dogs who did not participate in the socialization sessions served as a control group, or a representation of the standard to which the tested dogs were compared.

The results were abundantly clear: dogs who participated in the study exhibited noticeably fewer aggressive behaviors. Though Dr. Gfrerer's research team attributes these findings directly to socialization, Dr. Stanley Coren — a psychologist who focuses on the relationships between humans and animals — has another idea, which he discussed in a post on Psychology Today. Given the fact that adult dogs are markedly difficult to socialize, Dr. Coren believes the observable effects are not due to socialization, rather that it "...looks much more like the effects of exposure to a therapy dog for short periods of time." He continues, noting the effects observed, "...should eventually wear off over time if not strengthened by further therapeutic interactions."

Effectively, Dr. Coren believes the setup of the experiment was similar to a dog-on-dog therapy session, the results of which will fade if the sessions do not continue. If the observable effects are truly resultant of socialization, they would be permanent. Unfortunately, no follow-up was performed with this experiment, so there is no definitive way to make that distinction.

Regardless, there is something to be said about the observable (even if it is limited) effect socialization has on unsocialized dogs. If Dr. Gfrerer and her team are correct in their belief socialization is directly linked to the behavioral changes exhibited by the animals, the finding makes it clear: you can teach an old dog new tricks.

More like this
Ashley Benson Revealed The Whole-Body Effects Of Her Anxiety On TikTok
By Stephanie Topacio Long
Here’s How To Make The Spotify Music Festival Lineups Taking Over Instagram
By Alexis Morillo
You Can Save Up To 40% Off On TikTok’s Favorite Products This Black Friday
By Kristine Fellizar and Alexis Morillo
Are Sagittarius & Sagittarius A Good Match? Astrologers Weigh In
By Kristine Fellizar
Get Even More From Bustle — Sign Up For The Newsletter