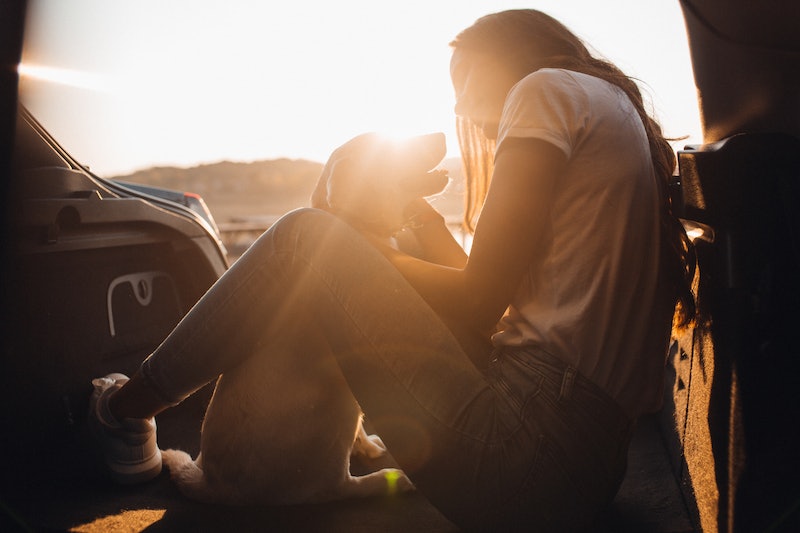 Speaking as someone who has struggled with anxiety and depression and shares a home with two cats, I can tell you from experience that the mental health benefits of having pets can far outweigh any personal sacrifices you might have to make to give them the life they deserve. In fact, studies and mental health experts tend to agree that dogs can help you fight depression better than some other domesticated animals likely could.

Dr. Danielle Forshee, Psy.D, LCSW, a psychologist and licensed clinical social worker, tells Bustle that the strong emotional bond that develops between a human and a dog can have powerful therapeutic effects on both mental and physical health for a number of reasons. "Current literature suggests that one of the reasons dog ownership is effective at combating depression and anxiety is because dogs compel their owners to do more outdoor exercise," Dr. Forshee says. She explains that dogs recognize and are sensitive to us, and even adjust their behavior to our communication signals and emotions.

Because of these innate abilities, Dr. Forshee says any dog breed should "do the trick" when it comes to fighting depression. However, she notes that certain dog breeds that have traditionally been tasked with hunting have unique traits that might be especially beneficial. "While there is no research indicating there is a specific type of breed or breeds of dog that are most effective at decreasing human depression and anxiety, research has found that various breeds of hunting dogs (retrievers, pointers, and setters) are associated with lowest risks of cardiovascular health problems," Dr. Forshee explains.

So even if you feel like you can’t help yourself right now, much less a pup, you should know that eventually adopting a dog could be a rewarding addition to your treatment. Here are seven dog breeds that can help fight depression:

Aside from their obvious cuteness, Cavalier King Charles Spaniels can help their humans fight depression in many ways — one being that they're super affectionate and love to cuddle. (They were the preferred lapdog breed of noble Scots back in the 1500s, and King Charles II liked these fluffy little love machines so much that he named them after himself.) In fact, as Animal Planet pointed out, the Cavalier King Charles Spaniel is so cuddly, that it's been nicknamed "The Love Sponge." These pups are supposedly easy to train and great with the kids, too, because they have a gentle temperament and they're eager to please.

Unfortunately, these little guys are particularly susceptible to heart problems, and require a lot of grooming. Cavalier King Charles Spaniels also need a daily walk — which can help motivate people living with depression to get outdoors and be active — but they can't tolerate high temperatures for very long. So before you adopt one of these babes, be sure you can commit to providing them with the kind of care they need to stay happy and healthy.

Personally, I love labradors. This is partially because they're a bigger breed and I like big dogs, but it's also because, in my experience, they're just so sweet. (I've also found that they chew on everything, though, so don't leave anything valuable within their reach.) Additionally, Labrador Retrievers are ranked as the most popular dog breed by the American Kennel Club because they're so friendly, outgoing, and high-spirited. Since they were originally bred to retrieve fishing nets (and sometimes even the fish that fell off hooks) Labrador Retrievers love to swim (they have webbed paws) and boast some serious stamina as well.

Labs are incredibly athletic dogs that love being outdoors, which encourages their human companions to follow suit. Further, in a nationwide Swedish study that was published in the science journal Nature, researchers found that retrievers — along with pointers and setters — were associated with the lowest risks of cardiovascular disease and death.

In addition to being happy and energetic dogs, Labs are very loyal, eager to please, and super trainable — it's why they're the breed of choice for search and rescue work, guide dogs, assisted living dogs, and even contraband detection work. Labs do have their own set of health issues though, like hip, elbow, and joint problems; and it's important to start training them as puppies.

As you can see from the above photo, Poodles are pretty cute. They're also relatively active, because before they were typecast as The Cute Parisian's dog in every movie ever, Poodles were the preferred hunting dog of northern Europe. And like Labs, they're also water retrievers, meaning they should provide the same cardiovascular health benefits that Labradors do.

Poodles love being around their person. They have the same people-pleasing personality traits that Labs do, and the Poodle's high level of intelligence lands them all kinds of work as service dogs. Born performers, they are super social, hypoallergenic, excellent at adapting to their surroundings, and with a lifespan of 10 to 18 years, they typically live longer than some other dog breeds, too. However, like the Cavalier King Charles Spaniel, Poodles require some serious grooming. (Their hair literally never stops growing, and they don't shed.) They also need lots of space. But if you don't mind being responsible for a dog who's potentially more high maintenance than you are, then you should seriously consider adopting one of these cuties.

Golden Retrievers exist because of an avid hunter named Lord Tweedmouth, who lived near the banks of the Loch Ness. He wanted to "develop" a hunting dog that loved the water and would happily retrieve fowl from both water and land (like Labs, Goldens have webbed feet), and that's exactly what he did. But Goldens are much more than skilled hunters and retrievers. As Shadow from Homeward Bound proved to all of us '90s kids back in 1993, Golden Retrievers possess a capacity for love and devotion that few dog breeds can boast. They're famously obedient and well-behaved, too. So much so, in fact, that Golden Retrievers were the first ever American Kennel Club Obedience Trial Champions. Additionally, they get a lot of work as guide dogs and search and rescue dogs.

Golden Retrievers are ranked as the third most popular dog by the American Kennel Club, largely because they're extremely friendly, intelligent, and devoted to their human companions. They'll joyfully swim, run, and fetch all day if you let them, making them an ideal pet for anyone dealing with sluggishness and other depressive symptoms. Like Labs and Poodles, research suggests Golden Retrievers can help boost the cardiovascular health of their human companions as well. They shed a ton, though, and they're prone to hip problems, so be prepared for that.

Their unbelievable cuteness combined with their intelligence and tendency to form strong bonds with their human companions make Yorkies one of the most loyal, loving, and trainable breeds out there. Since they like to be with their humans as much as possible, they're great companions for fighting depression, but you probably shouldn't adopt a Yorkie unless you're prepared to spend lots of time with them. Additionally, Yorkies are known for being affectionate, feisty, and energetic; and they're ranked in the American Kennel Club's top 10 most popular dog breeds.

Since Yorkies are so little, they're an especially great type of dog to have if you live in an apartment and don't have an outdoor space. Plus, they're considered hypoallergenic and their toy status means you can take them almost anywhere. Yorkies can be snappy around kids though, and they're prone to tooth decay and gum disease. They also have delicate bones.

Before they became popular pets, Yorkies were used as ratters in mines and mills, and a female Yorkshire Terrier named Smoky was one of the first ever documented therapy dogs. She was found in a foxhole by an American soldier in World War II, and went on from there to backpack through the jungles of New Guinea with Corporal Bill Wynn — visiting wounded soldiers and boosting morale along the way.

According to Animal Planet, Viszlas are nicknamed "The Velcro Dog" because they like being near their human companions that much. They form very close bonds with their humans and hate being left alone, the American Kennel Club points out; so while this makes Vizslas excellent companions for anyone dealing with depression, it also means you might not want to adopt a Vizsla if you're away from home more often than not.

Additionally, Vizslas are well-known for being as passionate about self-care as cats are, so they might actually be the only dogs that never smell like dogs. On top of that, Vizslas aren't genetically pre-disposed to any major health problems except for hip dysplasia, according to Animal Planet, and they're incredibly smart. When you combine all these pros with the fact that Vizslas like to exercise (read: run) for about two hours everyday, it's really not surprising that they made this list. That said, keep in mind that a dog as naturally athletic as the Vizsla won't thrive in an urban environment.

Although pugs naturally look like they're in a perpetual state of grumpiness, (and it's adorable) they are actually some of the most naturally positive dogs around, and they're easy to train. Although they can thrive in both the city and the country, the American Kennel Club describes this breed as the ideal house dog, and states that "Pugs live to love and to be loved in return." While Pugs aren't as athletic as Vizslas, Labs, Golden Retrievers, or Poodles (and they're bad swimmers), they still need two or three brisk walks each day.

Just know that pugs can't handle hot temperatures for very long, and it's not uncommon for them to suffer from breathing problems, either. You should also avoid tugging too hard on their collars, as this can result in eye problems, according to Animal Planet.

Of course, none of this should discourage you from adopting a pug if you want to — but being aware of your pet's needs before you adopt is super important. This way, you can keep your dog safe while they help you live your happiest, healthiest life.

More like this
How Ovulation Affects Your Sense Of Smell, Libido, & More
By JR Thorpe and Lexi Inks
The Beauty Device Kristen Bell Uses Every Single Morning
By Carolyn Steber
An Expert Weighs In On The Viral Raw Carrot Salad Trend
By Alexis Morillo
Here’s What Health Means To People In 2023
By Isabella Biedenharn
Get Even More From Bustle — Sign Up For The Newsletter
From hair trends to relationship advice, our daily newsletter has everything you need to sound like a person who’s on TikTok, even if you aren’t.

This article was originally published on July 29, 2016