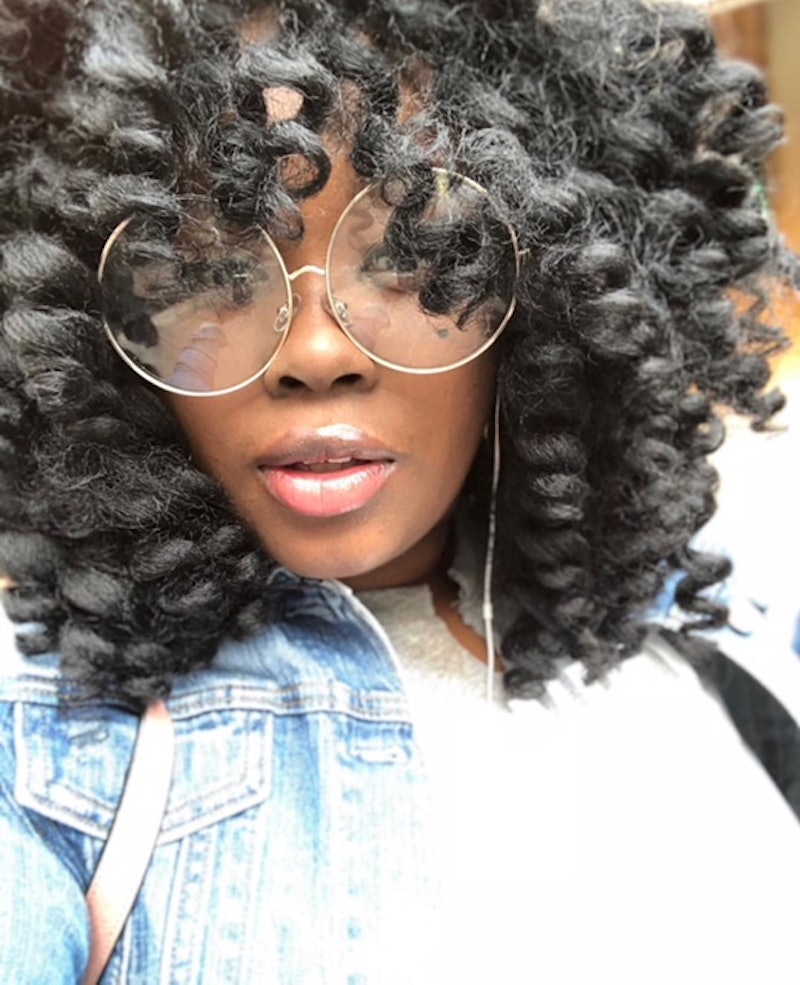 "Just don't be difficult." I’d repeat that phrase to myself every day on my walk to work. Sometimes, I would follow by making the sign of the cross on my chest and on the door of my job before I walked in. I'm not Catholic, but going into work — where I was the only black female employee, and the only staff member singled out for violating a dress code that we were told didn't exist — made me feel like I needed every bit of help I could get.

In the winter of 2016, I was hired as a hostess at one of Chicago's most popular restaurants, where there was often an hours-long wait. The restaurant catered to clientele who had the trifecta of privilege — youth, a superior attitude, and disposable income — despite being a short Uber ride away from one of the city's poorest areas. In fact, the place cashed in on its location; the owners spent thousands of dollars on making the inside of the restaurant look like your favorite SoundCloud rapper's basement studio, and when guests enter, it's intentionally dim, and they feel the bass of the hip-hop playlist. It's a place where wealthy white millennials of Chicago can wear their "3" Chance the Rapper hat, confidently rap along to songs with “n***a” in them, and feel like they're a part of the black culture they ignored while on their way over to the restaurant.

Telling a customer that we couldn’t seat them would often result in “F**k you”s and racial slurs yelled back at me. I'd had similar experiences at previous restaurant jobs, like when a guest called me a "black bitch" and left a negative Yelp review when I asked for his ID (which was part of my job). Working at restaurants in one of the country's most segregated cities, I sadly became accustomed to it.

But I didn’t only experience racist hostility from customers at this job; I also experienced it from management with the restaurant’s dress code. There was never a dress code for employees when I worked there, and based on talking to a former coworker, there still isn't. When I started, I was only told two things: wear dark colors and no perfume. My first few shifts, I studied my (white) co-workers' wardrobes. They wore jeans with t-shirts that mocked religion, denim jackets adorned with buttons that read "F**k Trump" or "Trans Rights," and sometimes just shorts with ripped tights and a dingy hoodie. No one was discouraged from expressing themselves through their clothing, so wearing things that might be interpreted as offensive to guests was perfectly fine.

In my experience, management has no concern with how guests view their white employees, but are consumed with how their black employees are presenting themselves.

It was the Wild West of dress codes and I was definitely here for it. I listened thoroughly during training, quickly learned to work the board, and was sure to dress the part. I ordered high-waisted black jeans, added some tees to my wardrobe, bought some sneakers and was ready to work. I dressed like the fashionable emo cousin of Rachel True's character in The Craft, complete with black acrylic nails and a dark lip to stand out as the hostess of the space. I wanted to make a great first impression, because I was the face of the restaurant.

I always put forth the effort to look put together at work, a statement that could not always be said about my co-workers. But while there were never any remarks when a server came in hungover, with half of last night’s highlighter and smeared dark eyeshadow on her face, or proudly commented that they hadn’t washed their hair in weeks, my superiors were quick to tell me if I had one curl out of place. We often checked our makeup using our phones or the mirror in the back before opening. One day, when I hadn’t quite mastered putting on a liquid matte lip yet, I guess I went a bit outside the line. One of my managers told me I “may want to fix my lips.”

My black friends in the service industry have encountered similar coworkers: white bartenders who wear the same clothes every shift, white servers who never make an effort, and to be honest, don't have to. In my experience, management has no concern with how guests view their white employees, but are consumed with how their black employees are presenting themselves.

The restaurant’s "Express Yourself!" dress code wasn't something I was meant to be a part of, and the shift when I wore a Black Lives Matter shirt made that abundantly clear. I paired it with a beret and black denim, but guests looked at me like I was a militant Bratz doll, and management was no better. Their reaction was so visceral, you would have thought I hit a guest (or wore pink on a Tuesday). I was told that my shirt might be offensive and aggressive to our guests. Never mind that a white employee wore the same shirt weeks later and wasn't reprimanded in any way.

I was confused. I thought it was a one-off occurrence. But when I later wore shirts that read "Unapologetically Black" and "Broad F***ing City," I was chastised again. My co-workers praised me for pushing the envelope — but I was simply dressing for work. I had no interest in being the Norma Rae of the hostess world. They found humor in the way my clothes upset management and encouraged me to wear the shirts again. But they never actually stood up for me to management. Turns out Twitter is right -- #SolidarityisforWhiteWomen.

There are unspoken standards you are held to while black in the service industry. You have worries and fears that never cross the minds of your white counterparts.

I finally decided to take advantage of the company's "open door policy" that I had heard so much about. I requested a meeting with the director to discuss the dress code, the reactions I received from management, and all of the other discrimination I had faced there. I waited one week for a response, the date of the meeting was changed twice after it was scheduled, and the location and time were moved 15 minutes before the meeting. I waited 15 minutes to meet with a director, only to be told by them that I was being overly sensitive to the reactions from management and customers. Afterward, I sat alone and humiliated. I attempted to take advantage of a policy that was supposed to allow me to voice my concerns, but was told that my concerns didn't matter. It was another perk of the job that applied to everyone but me.

Navigating rude co-workers, racist guests, and discrimination from management was all in a day's (mediocre) pay. There are unspoken standards you are held to while black in the service industry. You have worries and fears that never cross the minds of your white counterparts. And trying to make sure that I wasn't seen as the angry black woman, to guests AND management, was always a top priority. Friends thought that I should have sprinkled on my black girl magic and not given a damn; but I had rent to pay, bills to cry over, and savings to build, so it was never that easy.

I began feeling disposable at the restaurant. I hated being part of what felt like a late-night minstrel show where I played the role of "sassy black hostess," but I needed a job. My plan was now to keep my head down, wear clothes that brought no attention to me, and collect the checks until I could find something "better." A few weeks later, I was training a new hostess who had no experience, and as I helped her with her hiring papers, I noticed that her hourly pay rate was higher than mine by $2. I was probably training my replacement, they weren't paying me extra to do it, and she was going to get paid more than me. That is the exact moment that I knew I had to quit.

I put in my notice and on my last shift, I wore my Black Lives Matter shirt and strolled into work with the confidence of a white woman with "Elite" after her name on Yelp. I worked just as hard as I had any other shift, was paraded around by management as they told VIPs they were losing their “best hostess" and was even sad to say goodbye to my few kind regulars.

At the end of the night, as I clocked out for the final time, I felt a wave of bliss. I was happy that I was leaving, proud that I had finally stood up for myself, and excited to go back to wearing whatever the f*ck I wanted.