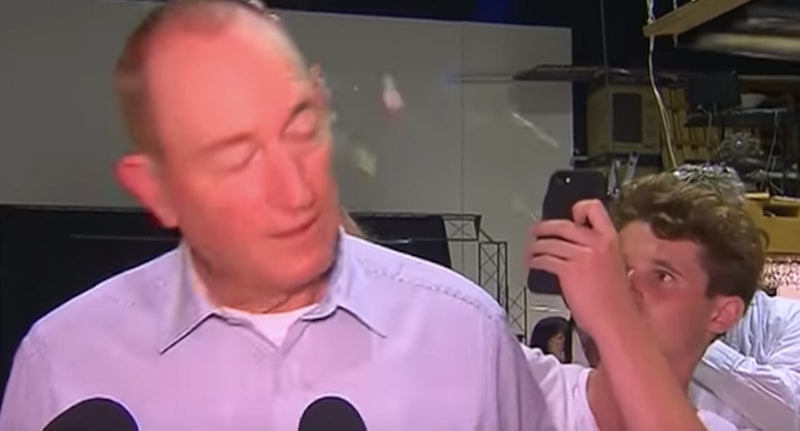 Australian Senator Fraser Anning appeared to imply on Thursday that Muslims were to blame for the attack at two mosques in Christchurch, New Zealand that left 49 people dead, and dozens condemned his comments. Then, on Saturday, the internet found the most unlikely hero in a teen boy who smashed a raw egg against Anning's head at a press conference. The boy was taken away by police and later released, and now fans have created a few GoFundMe fundraisers for "eggboy," as the internet is calling him.

After the attacks in Christchurch, Anning said that the "real cause of bloodshed" on New Zealand streets is immigration. "Let us be clear, while Muslims may have been the victims today, usually they are the perpetrators,” he wrote, according to Newsweek, among other comments.

Australian Prime Minister Scott Morrison strongly condemned Anning's comments and said Parliament would move to censure him when they return next month, according to ABC News.

But it was "eggboy" who answered Twitter's call that Anning face some kind of consequence for his comments. During a Saturday press conference a teen boy standing behind Anning smashed a raw egg into his head, as video of the incident shows. The senator turned around and punched the boy; the two were then separated by one of Anning's staffers. Bloomberg reported that far-right leader Neil Erikson and other supporters of Anning tackled the boy to the ground and held him there until police escorted him out. He was later released and he and Anning are both being investigated, according to Bloomberg. Bustle has reached out to Anning's office for comment.

The internet quickly rallied around the teen on Saturday with the viral hashtag #eggboy:

Twitter user Nick Jack Pappas wrote "Live your life with the brazen courage of a teen cracking an egg on a racist's head.#eggboy"

And others used the incident as a larger criticism of the consequences politicians face — or don't face — for anti-immigrant, xenophobic, or racist language. Charlotte Clymer, who works for Human Rights Campaign, wrote:

If the greatest consequence a white supremacist politician faces for his violent rhetoric is an egg to the head--not impeachment, not removal of powers, not shunning by his constituents--that should probably ring alarm bells that something is deeply wrong w/ the system.#eggboy

And then at least two GoFundMe fundraisers popped up to defend eggboy if he faces legal charges for his actions. None of the fundraisers have been verified, so it's important to note that they don't guarantee your money will go to eggboy. "Money for EggBoi" has raised nearly $10,000 for the teen, and says the funds will go to legal fees and "more eggs." The creator of the fundraiser wrote, "To those wondering how the money will get to him, I have contacted EggBoi through Facebook and you can see his response in the comments below."

Another fundraiser, titled "EGGBOY VS FRASER ANNING" has raised about $1,300 and says the fees will go toward legal fees and "More Eggs (Round two)." The fundraiser's creator also wrote, "One Lawyer has come forward with a beautiful gesture to cover all legal fees should EGGBOY press charges. EGGBOY has been identified and we have been in contact with him to forward all donations onto him."

And though some supported eggboy, they asked people to remember who is really affected by Islamophobia. Twitter user Wei Ming Kam shared an article about the 49 Christchurch victims and wrote:

I’m glad the Aussie kid who protested that racist Fraser Anning is ok, but like... how about getting back to the victims please (and it would be cool if the Aussie and NZ media & politicians took a look at how their rhetoric enabled this):

Here are some ways to support the victims, who were killed at two mosques in Christchurch.