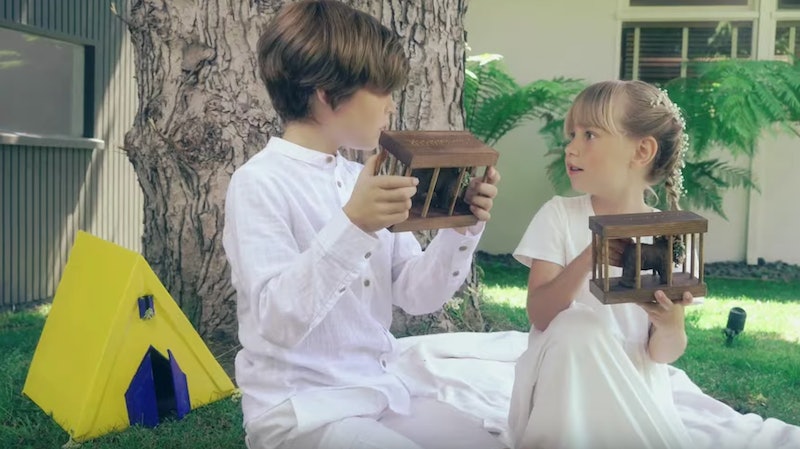 Midsommar spoilers ahead. Midsommar is the latest horror flick sweeping the nation — and creeping out the nation. So, of course, it makes sense that A24 is using the movie to sell toys — well, one toy. In a hilarious and somewhat audacious act of marketing, A24 will sell a miniature Bear in a Cage Midsommar toy on Wednesday July 10, so your kids can have their own satanic Midsommar festival. The website states that only 75 "toys" are available, so they'll probably sell out fast, but if you can get your hands on one, the Bear in a Cage costs $32.00.

The film, written/directed by Hereditary's Ari Aster, depicts a group of graduate students visiting a secluded village called Hårga in Sweden for its Midsummer celebration. Rather than partake in a lighthearted festival like the real Midsummer, the villagers set up a ritualistic human sacrifice festival, which is only revealed at the end of the film, and, surprise surprise, a bear plays a very important role in the terrifying ritual.

Of course the Bear in a Cage toy isn't actually made for kids — anyone who's seen Midsommar can tell you that — but on Tuesday, July 9, A24 released a satirical commercial that advertised the collector's item as if it were a regular kid's toy. There's even a catchy jingle that repeats "It's a bear!" It's so charming, you almost forget the fact that the bear is a nod to the film's early clue that the Hårga planned to torture the outsiders for the traditional sacrifices that take place every 90 years.

"In a cage is a bear what's he doing in there, locked inside no room to play on this lovely summer day," the jingle sings. The next line goes, "Who's pet could this be? Maybe we should set it free. His fur is soft his eyes so wide, why do they have him locked inside? It's a bear!" Meanwhile, clips of two kids dressed in Midsommar garb playing with the bear are spliced between scenes from the movie — the ad really makes Midsommar look like a movie about an idyllic festival.

The only indication that the the Bear in the Cage toy might not be as whimsical as the commercial makes it seem happens almost too quickly to catch, but the announcer's voice says, "Not compatible with other games like Skin the Fool from A24," referencing Mark's (Will Poulter) plight.

So, why the bear out of all of Midsommar's many foreboding themes and motifs? You do see a miniature mallet like the one in the movie in the Bear toy's commercial. Perhaps the bear's significance as one of the first clues that the getaway was going to be a horror fest is what makes it a perfect collector's item. A24's commercial even shows the scene from the beginning of the movie, when Simon (Archie Madekwe) says, "So are we just going to ignore the bear then?" To which Ingemar (Hampus Hallberg) replies, "It's a bear." It's not until the end of the movie when you realize that that bear was there, in the cage, to be slaughtered and disemboweled before enveloping a paralyzed Christian (Jack Reynor).

So does that mean that A24 will later sell a Christian in a Bear toy? Probably not. This could be your only chance to purchase a "hand-stained pinewood cage with Midsommar engraving [with a] resin grizzly figurine trapped inside," as the merchandise site puts it. Now good luck getting the "Bear in a Cage" jingle out of your head.

More like this
Jennifer Coolidge Hunted For Jewels & Lashes In J.Lo’s Hotel Room
By Jake Viswanath
Twitter Is Identifying With Sally Field & Jane Fonda’s Friendship In New Viral Video
By Jake Viswanath
Rihanna Shares Video Of 'Black Panther 2' Filmmakers' First Reaction To “Lift Me Up”
By Radhika Menon
Owen Thiele Asked Sundance Attendees About Films That Don’t Exist
By Grace Wehniainen
Get Even More From Bustle — Sign Up For The Newsletter
From hair trends to relationship advice, our daily newsletter has everything you need to sound like a person who’s on TikTok, even if you aren’t.