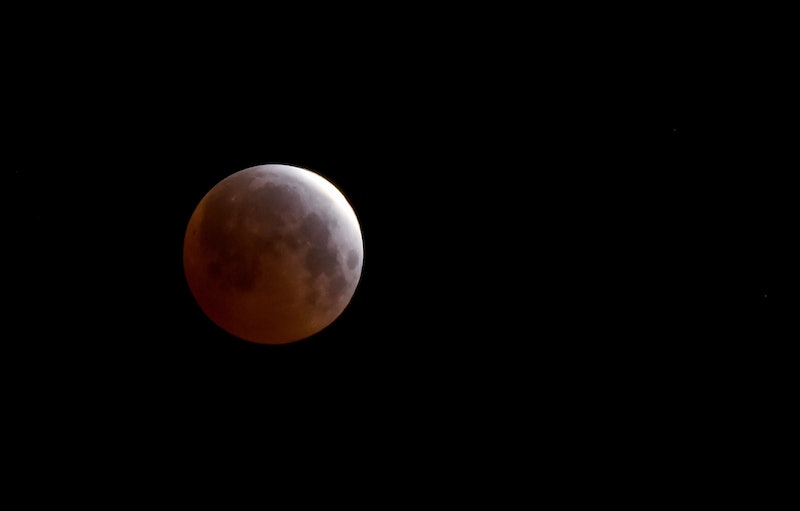 It's the month of all things autumnal, pumpkin-spiced, and downright creepy. Yes, October is spooky season and it looks like even the moon is getting in mood by transforming itself with a very Halloween-y shade. But don't worry the apocalypse isn't upon us, it's a natural occurrence — there's going to be an orange moon this weekend. I know, so many questions. Let's start with WTF is an orange moon?

Well, it's also known as a full Hunter's Moon, and according to iNews, the big old orange in the sky is expected to appear at the end of this week on Oct 13. This is all so spooky. The reason for the change isn't because it's been tangoed. It's all down to the changing seasons. The Hunter's Moon is in actual fact the full moon closest to the autumnal equinox. The autumn equinox is the official end of the summer and beginning of autumn, according to the Royal Museums of Greenwich's website. During this time, the sun shines almost directly over the equator and the moon rises around sunset, leading to a very bright and very orange moon, as iNews reports.

As with anything relating to the sky, you'll be wondering how clear it is to the human eye. Luckily it's going to be very easy to look at. All you have to do is look up. But if you have a telescope, it might be time to dust it off. And, if you're looking at it with anybody else, I give you full permission to wittily use the old Jaffa cakes advert. I mean I know I will be. Several times in fact.

The full moon is of course an opportunity for those interested in things on the witchier side to truly celebrate all things lunar. Among multiple other things, the full moon is a perfect opportunity to cleanse your crystals, as Bustle reports. As the moon rises, the best thing to do is leave them outside if possible and charge them up with all of your intentions, cleansing them of any negative energies that they might have picked up.

The full moon also heralds an opportunity for change personally and should definitely be celebrated as a clean slate for the month ahead. Some people get their witch on and perform full moon ceremonies. Good Housekeeping spoke to Luciana Naclerio who's an expert facilitator of moon ceremonies held at Space by Mama Medicine in New York City. She told the publication: "Spiritually speaking, a new moon is used to look inward and set intentions for the month ahead. You can perform a new moon ritual by writing down goals you'd like to accomplish in the upcoming weeks. A full moon usually occurs in the middle of the month, and is a time to check in on those intentions and goals and make sure we're integrating them into our lives."

So why not take this full hunter's moon as an opportunity to charge up your crystals, make some positive intentions, and of course howl at the moon?