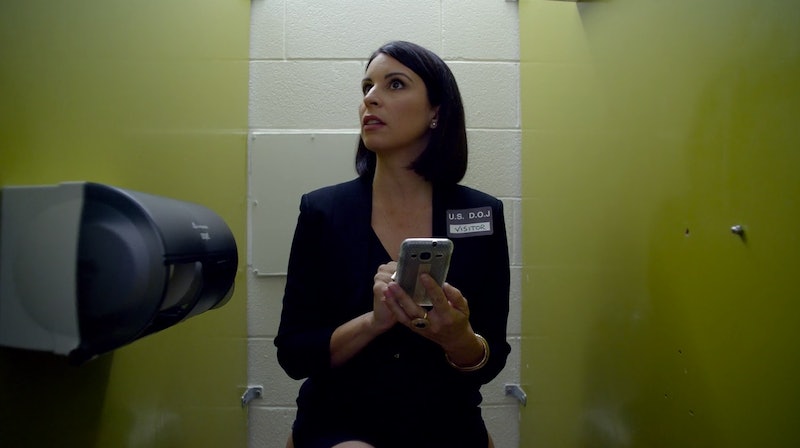 Whether they are ultimately a hero or a villain in the story, Orange is the New Black finds a way to show different moral shades in every character. To make assumptions about anyone in the series is a grave mistake. In Season 5, Orange is the New Black will show there's more to Linda than we know, according to actor Beth Dover in an interview with Bustle.

"You will definitely see some other sides to 'Linda from Purchasing' this season," Dover says, "for sure. Get a little deeper into her life." Hopefully that means a Linda flashback — though the circumstances of Season 5 pretty much guarantee that Linda is going to be part of the action at Litchfield in a more hands on way than she has been in the past.

"The entire next season takes place over three days," Dover teases. "If you remember from Season 4, Linda winds up in the bathroom of the prison." That's all she can say without spoiling, but "buckle up," she adds, "because it's a very exciting season."

Not only is Linda trapped in the bathroom at the beginning of a riot, but this is the first time that the MCC employee has every visited the facility that she's in charge of budgeting. What a day to get a change of perspective, huh? Linda represents some the worst aspects of privatized prisons, so this will get interesting.

"I think Linda only cares about the bottom line," Dover says. "She only cares about money, and the budget, and doesn't really care about the prisoners' well-being, ultimately, and wants to just rise up the corporate ladder. So it's interesting to see her learning process this season."

In a year that has been scrutinized all art with newfound charged political relevancy, it's nice to have a show like Orange is the New Black that has always been one step ahead of the conversation. It doesn't hurt that the show is filled, on screen and off, by so many powerful women.

"Being a part of this cast has been such a gift," Dover says, "especially post-Trump election." Not only is the cast talented, as she says, but they're also active activists. "I flew to Washington DC," she says, "for 24 hours and marched with the Orange cast. It was really truly, I mean it, a gift to be part of this cast during this political time. Absolutely."

Apart from Orange is the New Black, fans Dover from a few other satires and comedies, like Burning Love. She'll appear again as Shari in Wet Hot American Summer: Ten Years Later and also as Blanche in Season 3 of Another Period this summer. Her character on OITNB may be callous at times, but it seems like Season 5 might educate or humble her in a hilarious way.

More like this
The 'Gossip Girl' Reboot Creator Is “Looking For A New Home” To Air A Potential Season 3
By Brad Witter
Here’s What Happens To Bill & Frank In 'The Last Of Us' Video Game
By Brad Witter
Michael B. Jordan Tackled His "Public Breakup" With Lori Harvey On 'SNL'
By Brad Witter
Who Is Murray Bartlett Dating? 'The Last Of Us' Star Is Extremely Private
By Alyssa Lapid
Get Even More From Bustle — Sign Up For The Newsletter
From hair trends to relationship advice, our daily newsletter has everything you need to sound like a person who’s on TikTok, even if you aren’t.