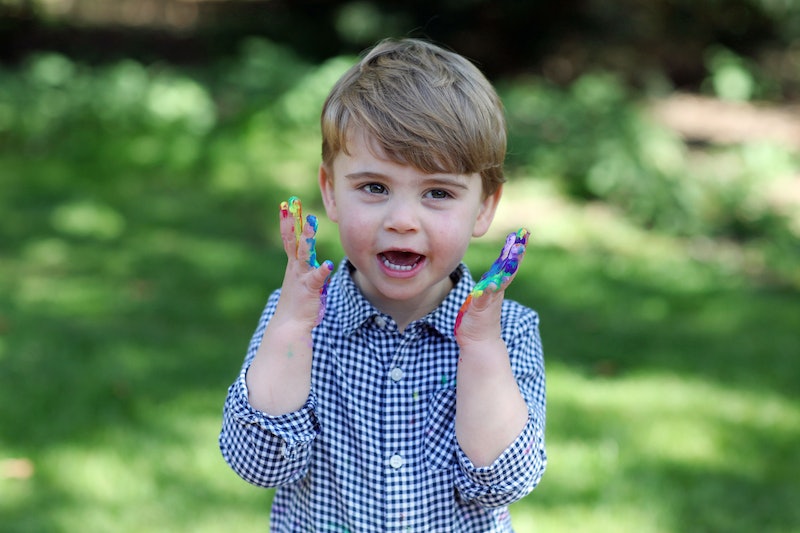 The Duchess of Cambridge/Shutterstock
By Sophie McEvoy
April 23, 2020

Spending your birthday in lockdown is a weird experience to say the least, but people are finding inventive ways to celebrate with their loved ones. The same goes for the royal family, who are marking Prince Louis' second birthday with an array of adorable photos across their social media accounts, including a lovely tribute to the rainbow trend bringing cheer during this uncertain time.

Taken by Kate Middleton, the series of photos see a cheeky Louis with his hands absolutely covered in multicoloured paint. "Sharing a sneak peek of Prince Louis's handiwork ahead of his second birthday!" the caption reads on Instagram. Louis is certainly following in Prince George's creative footsteps, which the royal couple showcased last month with his Mother's Day card for the Duchess of Cambridge.

Prince Charles and The Duchess of Cornwall also shared birthday wishes for their grandson, posting a heartwarming picture of Louis hugging his grandad. "A very Happy Birthday to Prince Louis, who turns two day," @clarencehouse captioned the image.

Initially posting three photos to their @kensingtonroyal handles on Instagram and Twitter, the Duke and Duchess of Cambridge were also quick to highlight their youngest's personality by uploading an 'Instagram Vs Reality', showing Louis spreading the otherwise picturesque paint all over his face.

As BBC News points out, George and Louis penchant for paint is "likely to be part of William and Kate's home-schooling lessons" which they have been leading during the lockdown and the Easter holidays. "It's just having that bit of structure, actually," she told the BBC. "It's great, there are so many great tips online and fun activities that you can do with the children so it hasn't been all hardcore."