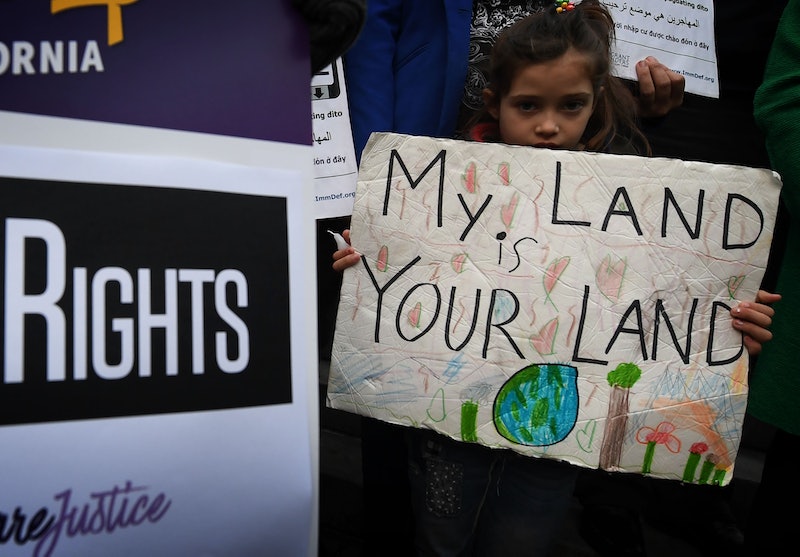 President Donald Trump is expected to sign an executive order this week temporarily banning refugees from entering the country and halting the issuance of all visas to six countries that have seen internal violence in recent years, as well as Iran. All of them are in Africa and the Middle East, and all are majority Muslim. But interestingly, none of the countries included in Trump's immigrant ban have connections to terrorism committed in the United States. So, what's the real reason?

Trump's impending executive order is entitled, "Protecting the Nation from Terrorist Attacks by Foreign Nationals," according to a copy leaked to The Los Angeles Times. Therefore you'd think the goal would be preventing terrorist attacks. But while it's true that Iraq, Iran, Libya, Somalia, Sudan, Syria, and Yemen all have their share of problems, no one from any of those nations has led an attack in the United States.

As Vox reported, most of the recent terrorists here were born in the United States or came to the country at a young age. And though they were influenced by propaganda, their efforts were not organized from abroad. The Orlando Pulse nightclub shooter, for example, was American-born of Afghan descent. Similarly, the San Bernardino shooters were an American of Pakistani descent and his Pakistani wife, who was a U.S. resident. Lastly, the brothers who bombed the Boston Marathon were from Chechnya originally but immigrated from Kyrgyzstan.

Then there are the 9/11 hijackers. They are overwhelmingly from Saudi Arabia. There is also an Egyptian hijacker, another from Lebanon, and two from the United Arab Emirates. Osama bin Laden was Saudi too. Fast forward 16 years and the current leader of Al Qaeda is Egyptian.

Do you see a pattern among these countries? They're not on Trump's list. Pakistan and Saudi Arabia are the most represented. And Egypt is up there too. They're not his focus, though, which is curious. On the campaign trail, Trump promised to ban entry from any "from any nation that has been compromised by terrorism." According to his reasoning, it seems as though that would put Turkey in the mix; there have been numerous attacks there this past year, including the New Year's nightclub shooting. It's also not part of the ban.

The countries that do have the most links to U.S.-based terrorism (save Pakistan, as well as Turkey), are also places that Trump does business. Curiously, Trump doesn't do business deals in the seven countries included in the visa ban. And as for Pakistan, Trump seems to want to be on their good side for some reason too. He reportedly told their prime minister in December, "Your country is amazing with tremendous opportunities."

These countries are also U.S. allies, so it would be unwise to ban them for political reasons. This is the kind of abnormal position that must be opposed. Sadly this area of immigration and border control is fully under the president's purview. That said, call the White House today and tell them you're opposed to this discriminatory plan.