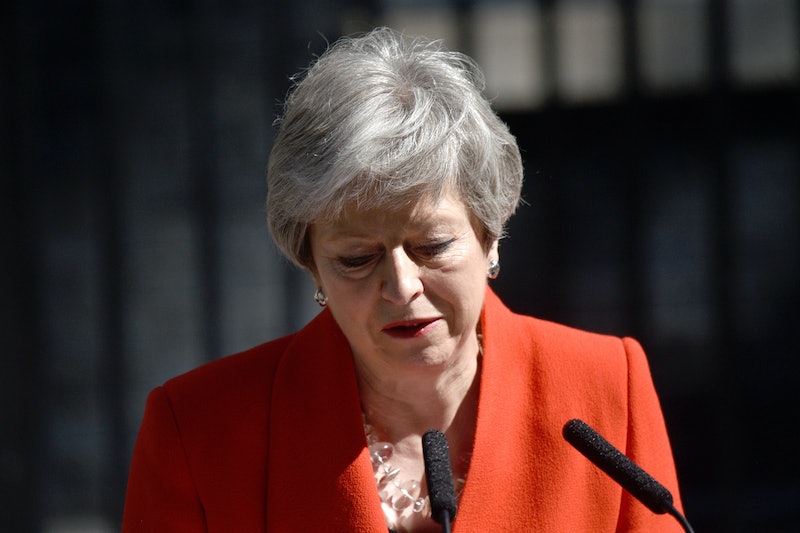 After numerous calls to quit, the Prime Minister has finally listened. On Friday, the Conservative leader announced that her last day will be June 7, paving the way for a leadership contest the week after. But whether you have supported or denounced her work over the past three years, it seems clear that Theresa May's resignation is tied into the glass cliff phenomenon.

In 2005, professors from the University of Exeter, Michelle Ryan and Alex Haslam, coined the "glass cliff" term. Riffing off the well-known "glass ceiling" that many women and minorities face in the working world, the glass cliff is the precipitous drop that female leaders often fall from. The professors argued that, in actual fact, women (who are typically viewed as a comforting presence) were more likely to be given leadership positions in times of crisis, making a fall from grace even more likely.

A study, published in the British Journal of Management, of FTSE 100 company performance before and after the appointment of a male or female board member "revealed that during a period of overall stock‐market decline those companies who appointed women to their boards were more likely to have experienced consistently bad performance in the preceding five months than those who appointed men."

May's rise to the top followed a similar pattern. David Cameron gave people the chance to vote on EU membership and resigned shortly after the result. Despite campaigning to remain, May saw an opportunity to take control. A lack of willingness from potential male candidates coupled with the glass cliff concept ensured her success.

It's possible that she was always destined to fail. “Women are still, time and time again, given these opportunities when these organisations are struggling,” Alison Cook, a professor of management at Utah State University, told Global News. “They’re starting at a deficit, they’re facing more scrutiny.” Cook is referring to the business world, but the same goes for politics.

May was put in an almost impossible position. She was asked to do something no one else had ever done before. It's true that she didn't have to accept the role of Prime Minister, but the glass cliff meant that the Brexit chaos may have been her only chance. You don't have to feel an ounce of sympathy for her, or even like her politics, to recognise this.

No woman in a powerful position wants to be seen as a failure, particularly because they know their slip-ups are likely to signal a male replacement. Perhaps this is what encouraged her to keep going — to attempt to deal with Brexit, cross-party talks, and votes of no confidence — when public opinion dictated that she resign.

Now, the saviour effect is set to show its face. As PBS explains, this is when a "safe" and normalised option is chosen to lead immediately after a woman's decline. In other words, a white man. It's no surprise that bookmaker odds are already showing the likes of Boris Johnson, Dominic Raab, and Michael Gove to be the favoured successors of May, as LBC reports.

They've watched her failures, taken note of the public and professional criticism directed toward her, and will likely fare much better because of it. Once again, a woman has almost certainly fallen to let a man rise.

May, in your opinion, may not have been a good prime minister. But that should not be a reflection of her gender. "The second female prime minister, but certainly not the last," she optimistically predicted in her resignation speech. For another woman to leave the same post with a positive legacy, the glass cliff will have to crumble once and for all.

More like this
Wimbledon Alters All-White Kit Rule Amid Candid Period Discussions
By Catharina Cheung and Rachel Mantock
The David Beckham Qatar Controversy, Explained
By Sophie McEvoy
What To Know About Martin Bashir After Watching 'The Crown'
By Bustle UK
'Waterloo Road' Is Back, With More Than A Few Familiar Faces
By Sam Ramsden and Vivian Iroanya
Get The Very Best Of Bustle/UK