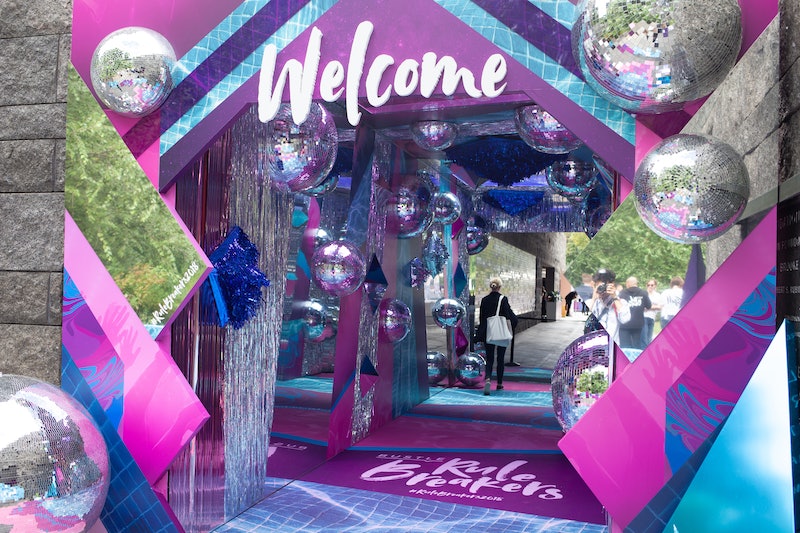 Breaking a rule is easier when someone else has done it first. Many radical folks wouldn't have reached their subversive potential without mentors and personal heroes — figures who doubtless had people of their own that they looked up to. At the Bustle Rule Breakers event on Saturday, we asked performers and attendees for their rule breaker role models, and their answers were super moving.

Ciera, who's 25 years old, didn't hesitate. She immediately names Ida B. Wells, a journalist who documented civil rights abuses around the turn of the century. "She wrote truth to power," Ciera says. "She risked so much being in Mississippi and documenting lynching at a time when it was not safe for her to do so. She persisted and she did it."

She also has a more recent example in mind: Solange, creator of 2016's groundbreaking album A Seat at the Table. Ciera says she loves Solange's "energy, her style," and how she's committed to "just loving herself, just being who she is."

Female celebrities of color dominated the answers. People brought up Beyoncé and Rihanna, whose recent fashion show at New York's Fashion Week inspired Alison, 33. The singer/designer debuted her Savage x Fenty line by using models of a wide variety of ethnicities and sizes, including one pregnant woman. "She's really courageous to be herself and to encourage other people to be themselves," Alison explains, saying she appreciated how Rihanna was "celebrating everyone's unique beauty."

Twenty-eight-year-old Sandie names two actresses from Crazy Rich Asians, Constance Wu and Gemma Chan. She says she was particularly inspired by how Chan auditioned for drama school in secret even though her parents wanted her to practice law and "there were like no Asian faces onscreen" at the time. Sandie says she could relate to that: "You kind of fall into this thinking like, 'Oh I have to do X, Y, and Z to be successful,'" she explains, noting that she's personally been dealing with "working in corporate forever and being sad about that," but has managed to find a way out. "I just recently quit my job," she says, grinning.

Artist, filmmaker, and DJ Va$htie, who played two sets at Rule Breakers, names three legacy icons, women who beat an unconventional path for themselves, and as a result, for the rest of us. "I really love women like Patti Smith, Whoopi Goldberg, and Oprah. Women who had no existing model of who they wanted to be or became and just did them. Especially at times when there was a specific rule for what women did during their generation. They completely shattered it."

Then, of course, there was Janelle Monáe, the Grammy-nominated singer headlining the Rule Breakers festival. Becky, 39, notes that she appreciates Monáe because she "gives no f*cks." She adds, "I appreciate that in a human being. All the human beings I think could do a better job giving no f*cks." Annie, 23, agreed. "She never apologizes for who she is," she says of Monáe. "She's proud of every facet of her being, and that's just to me really inspiring, it teaches me every time that one of the most radical things you can do in a world that tries to erase you is just be yourself."

Not everyone has a famous figure in mind. Others bring up family members, like Sophie Hawley-Weld of the Grammy-nominated duo Sofi Tukker, another act performing at Rule Breakers. "Probably my parents, who grew up in the U.S. and then when they met, eloped and decided to spend their lives constantly moving around the world. The courage they’ve had to abandon their families norms and follow their wanderlust and curiosity about the world is really inspiring."

Thirty-year-old attendee Justine names her grandmother, the person who raised her and for whom Justine recently cared for as she dealt with terminal cancer. "I'm in awe of the woman that she was," Justine says. "She came on a boat, pregnant with her first child, when she was 19 years old, from North Africa. She raised us when my grandpa died, almost by herself." She says her grandma "changed my life."

Still others brought up fictional role models. Ariel, 32, mentioned the titular character of Buffy the Vampire Slayer, who to her mind "was really all about work-life balance." Buffy, she notes, followed her "personal compass": "When she had to tell Giles no, it was no, when she had to tell Mom no, it was no, and so on and so forth." Shailyn, 27, mentions the character Max from Maurice Sendak's Where the Wild Things Are, who taught her that she wouldn't lose her parents' love for throwing a temper tantrum. "At the end of the day, he still had a hug from his momma," she says. "That’s what my takeaway was. Which is true [of my mother]. She'll be there no matter the hissy fit I pull."

One rallying answer came from Samantha Ronson, an English songwriter and DJ who performed at the event. For all you know, you could be Ronson's rule breaker role model, because it's "everyone and anyone who lives authentically." She adds: "Whether I agree or relate doesn't matter, just that they are true to themselves." Now that's a sentiment everyone can get behind.